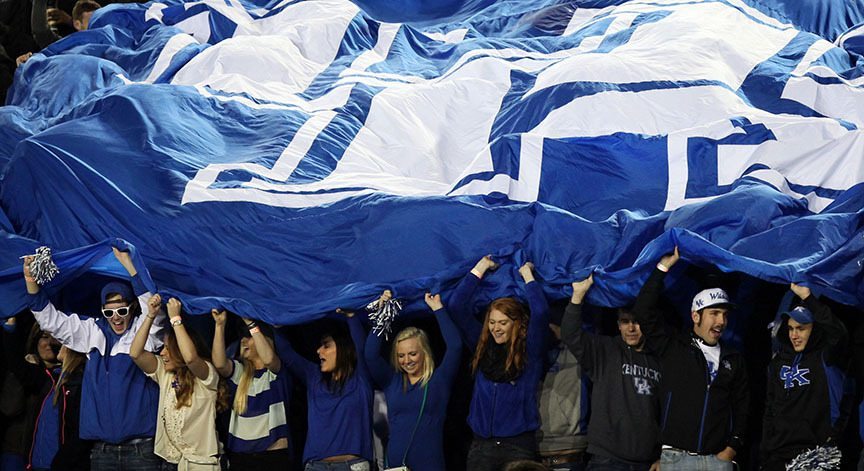 By FITSNEWS  ||  For the second straight weekend, the University of South Carolina football team blew a double-digit lead in the fourth quarter against an unranked opponent it should have beaten – this time surrendering 21 unanswered points in the final eight minutes on Saturday night against Kentucky.

Like it or not South Carolina fans … your “Shamecocks” are back.

Of course Spurrier can’t fire Ward after this debacle … not given the brain-dead play-calling his offense employed in the second half against the Wildcats, who won back-to-back SEC games for the first time in five years (and beat Spurrier for only the second time in 22 attempts).

Despite shredding the Kentucky defense for 283 rushing yards – averaging six yards a carry – Spurrier’s offense inexplicably attempted to throw its way to victory in the fourth quarter.

Fifth-year senior quarterback Dylan Thompson – whose well-chronicled struggles throwing the deep ball and telegraphing his passes proved fatal against the Wildcats – tossed a pair of interceptions on the Gamecocks’ final two drives of the game, one of which was returned by Kentucky defensive lineman Alvin Dupree six yards for the deciding touchdown.

Thompson also threw a critical interception late in the first half, ending a drive that could have put South Carolina up 24-14.  Instead, the two teams entered their respective locker rooms tied 17-17.

Thompson finished the evening completing 23 of 37 passes for 218 yards with one touchdown and three interceptions.

Why he was called upon to throw the football 37 times?  We haven’t the foggiest of notions … especially in light of the way the Gamecock ground game excelled against the Wildcats.

But South Carolina couldn’t leave well enough alone … inexplicably deciding to stake the outcome of the game on Thompson’s right arm rather than grinding out the win via its stable of big, bruising backs.

The result?  A soul-crushing loss that dropped South Carolina to 3-3 (2-3 SEC) on the season – and effectively ending any chance the Gamecocks may have had to reach the SEC championship game.

Last weekend against Missouri – before a similar fourth quarter collapse against the Tigers – it seemed as though South Carolina had shaken off its early-season woes.

But Ward’s defense – which took a step forward against Missouri (at least for the first three-and-a-half quarters) – was gashed by Kentucky for 447 yards.

Operating out of the Wildcat formation, tailback JoJo Kemp ran for a career-high 131 yards on seventeen carries – scoring three touchdowns (including a pair of pay dirt runs late in the fourth quarter to knot the score at 38 apiece).  Gassed Gamecock defenders knew exactly what was coming and they still couldn’t stop it.  Hell, even when Kemp himself was gassed himself he still ran right through them.

Six weeks ago a loss against Kentucky seemed unimaginable.  The Gamecocks were ranked No. 9 in the nation and Spurrier was talking all sorts of trash to his rival coaches – while telling Gamecock fans Thompson was poised for a “big year.”

Mercifully, the Gamecocks have next weekend off before beginning the second half of their season at home on October 18 against in-state rival Furman.  After that, they go on the road against No. 5 Auburn.

Florida Football Is Blowing Up