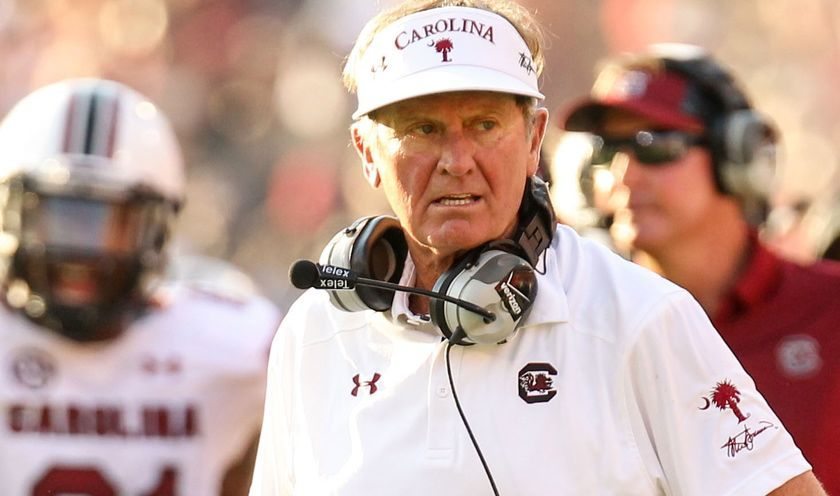 The University of South Carolina football team enters the 2014 season ranked No. 9 in the nation – five spots below its school-record 2013 finish.  The Gamecocks (0-0, 0-0 SEC) have a lot of questions to answer – starting with how will their defensive unit will respond to losing No. 1 overall NFL draft pick Jadeveon Clowney?

Clowney’s 2013 campaign wasn’t quite the same tour de force  as his sensational sophomore season, but the extent to which teams were forced to compensate for his presence on the field made it much easier for other Gamecock defenders to make plays.

Meanwhile on offense South Carolina is losing its heart and soul with the departure of Connor Shaw – the winningest, grittiest quarterback in school history and the guy who led the team to three consecutive Top Ten finishes.

If head coach Steve Spurrier is worried about these personnel losses, though, he sure isn’t showing it.

Last month Spurrier made headlines by poking at Alabama head coach Nick Saban – you know, the guy whose program has won three of the last five national championships.

This week Spurrier trained his fire at Texas A&M – which enters the 2014 season ranked No. 20 in the nation.  The Aggies (0-0, 0-0 SEC) will head to Columbia, S.C. on August 28 to take on the Gamecocks in the season opener for both squads.  Odds makers have installed the Gamecocks as early 10-point favorites at home.

“They haven’t played the bigger teams so their schedule has been a little misleading,” Spurrier told reporter Josh Kendall at The (Columbia, S.C.) State newspaper – a diss that quickly made its way to the Lone Star State.

Spurrier also noted how the Aggies stopped their 115-year rivalry with perennial national powerhouse Texas when they bolted the Big XII for the Southeastern Conference, contrasting that decision with the Gamecocks ongoing rivalry with ACC powerhouse Clemson.

During his twelve seasons at the University of Florida, Spurrier developed a reputations as a brash trash-talker – getting inside the heads of his opponents (especially the University of Tennessee).  During his first five years in Columbia, Spurrier said little – and with good reason.  The Gamecocks were a mediocre program with a losing record in the SEC – and we were ready to run Spurrier out of town on a rail.

More importantly to die-hard Carolina fans, Spurrier has beaten arch-rival Clemson five times in a row – at a time when the Clemson program is also enjoying tremendous success of its own under head coach Dabo Swinney.  In fact there’s a big story in The Sporting News this week about the Carolina-Clemson rivalry emerging on the national stage.

Spurrier watchers have long noted that the better his teams are – the more he talks.  That would portend good things for Gamecock fans in 2014.  Also it’s impossible to ignore that the Gamecocks received one first-place vote in the preseason USA Today/ Coaches’ poll.

And our guess is that wasn’t Swinney’s ballot …

I’m not saying the crazy SOB is wrong, I’m just saying that I’m glad he quit killing puppies long enough to say it.

PS: I heard Dabo is S#!tt!*g his pants over how bad the Tigers are w/o Tajh and Sammy….

Funny how Dumb@$$#$ like FITS bash coaches for veiling the truth, or being vague…then when Spurrier is brutally honest, FITS calls it a “Diss.”

If the media is what it says it is: Spurrier should be seen as refreshing.

Also of note (in true FITS cliché SC sports media tradition) Conner Shaw was SC’s “Heart and Soul.” Notice the Lockstep local media has that tendency to lavish all kinds of praise on SC players once they are OUT of the program…

Hard to tell if FITS is trying to trying to impugn SC and Spurrier, or is he just copying what others do, because he lacks the mind to successfully define the Gamecocks’ program…(Remember: FITS is an avid and angry supporter of the now-deposed MoRon.)

I think Spurrier is to a point he can say what he wants and back it up. It ain’t bragging if you can do it.

FITS, on the other hand, brags a lot, but it turns out to be untrue too much. So I’d be a lot more likely to be on Spurrier’s side, than on the side of the nattering nabobs, who constantly get it wrong.

Liz Gunn asked us to clean it up around here so I’m only going to call you a cocksucker. The rest I’ll just leave to your imagination.

SC has anSEC Championship appearance on the field this year. Have fun Dylan, picking apart defense coverage in the middle. Those sidelines are going to be painted by QB Dylan Thompson. Shoot, the backups will get a lot of snaps with 4 td leads going into the 4th. Have fun guys and get that SEC Ring!

To Wilder, Carson, and Davis: Who Let The Dogs Out!

Compare SEC schedules a minute. No comparison. In 2013, USC had likely the easiest possible in-conference schedule in a decade or more and still couldn’t win the East with the best roster USC has ever had. Whatevs, Stevie. Pour yourself another one and quip some more. You’re a great quipper.

so you are saying that loss to Mizzou which USC beat by the way makes A&M’s schedule harder? or your 0 ranked nonconference opponents? hell USC beat 3 top 10 teams, they beat,…..none. Word it how you want to but it doesn’t compare apples to apples to help your case

USC still has an Alabama mouth and a Vanderbilt trophy case.

Not only are you changing your name and talking to yourself, you are up voting your own posts. Loser

Talking to yourself again?

You back from dusting off that ACC championship trophy?

no one else will talk to him. not since mama squishy is too busy doing what she does best

These days that would be decomposing. Your mom still sucking off middle school boys?

Now you are arguing with yourself to act like you aren’t the same person? Pathetic.

But South Carolina has a secret weapon – they’re going to suit up T-Rav as QB and watch the sparks fly.
Why didn’t Haley go to USC – you’d think with the mascot she’d have wanted to be there – so loves those things.