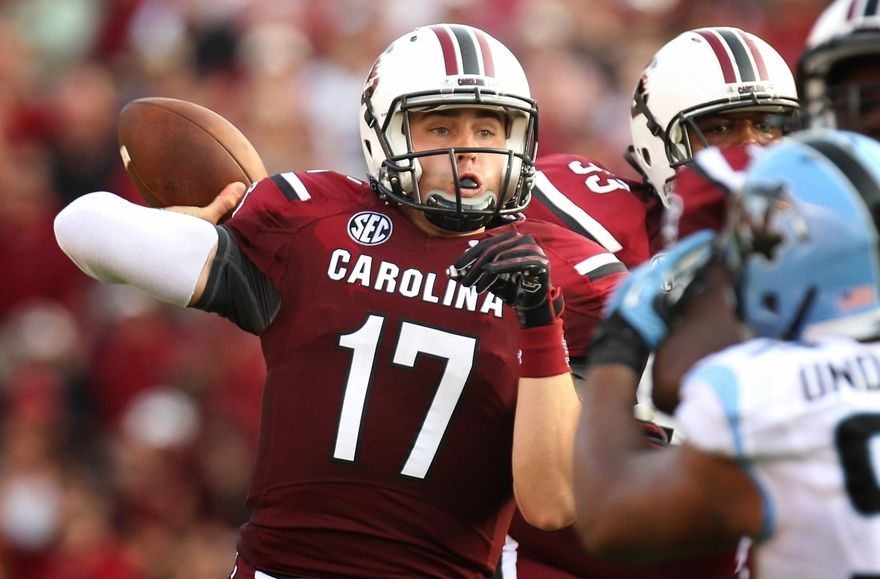 More importantly, he earned a vote of confidence from his head coach Steve Spurrier – the former Heisman Trophy-winning quarterback who is notorious for being hypercritical of his signal-callers.

“Dylan hit about everything and made some nice checks,” Spurrier said. “He’s ready to play. We’ve got to keep him healthy, but he’s ready to have a big year I believe.”

Hmmmmm … could this be why Spurrier’s been so confident this off-season?

Thompson played in eight games in 2013, seeing extensive action in four contests. He completed 52 of 89 passes for 783 yards with four touchdowns and three interceptions as a backup to starter Connor Shaw.  He also ran for three scores.

Thompson then capped the Gamecocks’ 2012 season by filling in for Shaw in the waning moments of the 2013 Outback Bowl, hitting wide receiver Bruce Ellington with a 32-yard game-winning touchdown with only 11 seconds on the clock.

Who would Spurrier play if Thompson were hurt or otherwise unavailable?  Nothing is set in stone at this point, but redshirt sophomore Perry Orth – a 6-foot-1, 200-pound Florida native – appears to be the current No. 2.

“If we had to put somebody in today, there’s a good chance he would probably be in there,” Spurrier said of Orth, who completed three of six passes in the scrimmage for 73 yards and a touchdown.

Shaw was signed as an undrafted free agent this year by the Cleveland Browns.

Spurrier’s Gamecocks – ranked No. 9 in the preseason USA Today/ Coaches’ poll – open their 2014 season at home on August 28 against No. 20 Texas A&M.  That game will kick off at 6:00 p.m. EDT and will be televised nationally on the new SEC Network.

Nine Is Fine In Carolina