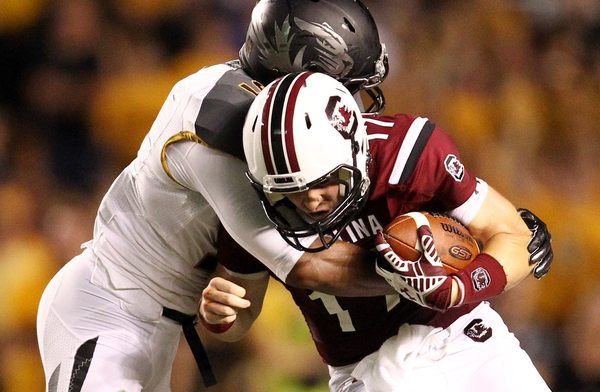 By FITSNEWS  ||  Fifth-year senior Dylan Thompson is 6-2 as the University of South Carolina’s starting quarterback.  Over that time, he’s thrown for 3,186 yards and 26 touchdowns (against only eight interceptions).  He’s currently the No. 2 passing quarterback in the SEC (trailing only Texas A&M’s Kenny Hill) – and has completed a career-high 61 percent of his passes so far this season.

Despite his digits, Thompson’s critics are mounting – and fans are clamoring to see what head coach Steve Spurrier’s stable of young back-up signal-callers can do.

“Five games into the season, it’s time to accept that Dylan Thompson’s fate is to be nothing more than a game manager that the Gamecocks have to win in spite of, rather than because of,” Josh Arnold of The Garnet Report  wrote this week.  “The 2012 Thompson who came off the bench to save the Gamecocks is now a distant memory, having been replaced by the current Thompson whose best skill at the moment seems to be overthrowing wide receivers.”

“There is no doubt that Dylan can throw the deep ball and will (or might) be a successful quarterback in the SEC,” our critic began. “Thompson – at times – has proven himself to be a winner. However, these downfield passes are important and crucial plays in Spurrier’s offense.”

Indeed … and Thompson was supposed to be a better deep ball passer than Shaw.  In fact Spurrier led Gamecock fans to believe Thompson was going to excel running his offense this season – his first as a starter.

According to our critic, the five most important passing plays in Spurrier’s offense are the corner route, deep post route, deep crossing route, fade route and wide receiver screen.

Is Thompson accurate on these throws?

Not nearly as often as he should be … especially on passes longer than thirty yards. 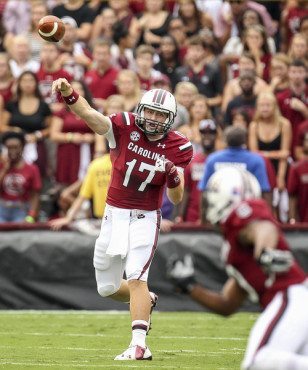 Thompson’s accuracy on these deep throws is “borderline nonexistent,” according to our critic – who highlighted several key misses that have become emblematic of Thompson’s problems.

Take the Gamecocks recent win over Georgia – in which Thompson started the game completing ten of eleven passes only to misfire on six of his next fourteen throws.

After making one of his best passes of the season to Nick Jones on a 25-yard sideline streak route (setting up South Carolina with first-and-ten from the Georgia 22-yard-line), Thompson followed up with one of his worst throws of the season – missing a wide open Pharoh Cooper in the end zone for a touchdown that would have put the Gamecocks up 28-13.

“Terrible foot-work, terrible mechanics and throws off of his back foot,” our critic observed.

As a result South Carolina entered the locker room with an eleven-point lead, not a fifteen-point lead.

In the Gamecocks win against Vanderbilt, we saw more of the same …

Trailing 7-0 after giving up a 91-yard touchdown return to the Commodores on the opening kickoff, the Gamecocks came out in two tight-end set with two men in the backfield.  Expecting a run, Vanderbilt stacked the box and covered wide receiver Damiere Byrd – the fastest player on any college football roster – man-to-man.

Byrd ran a beautiful deep post route and was wide open downfield – but Thompson missed him by a mile.

Similarly, Thompson missed Jones on a similar route later in the first quarter – after Shaq Roland dropped a pass that was mildly overthrown.  Another post route to Cooper in the second quarter resulted in a badly overthrown pass in the end zone.

These missed connections – and others like them – are one reason why South Carolina has struggled to win games (and lost games it should have won).  Seriously … this is one of the best wide receiver corps in America, and they are getting open against SEC defenses.

Another problem Thompson is dealing with?  Locking his eyes onto his intended receivers.  Telegraphing throws was the reason Thompson was unable to connect with Cooper or tight end Rory Anderson on two deep passes over the middle during the final drive of South Carolina’s loss to Missouri.

“The missed throws just makes you cringe and question Dylan Thompson’s ability to be consistently accurate on passes of thirty yards or further,” our critic concluded.

Let’s not get carried away with the Thompson-bashing, though.  South Carolina’s No. 1 problem this season – the primary reason it has fallen from a Top Ten program to an unranked team in precisely one month’s time – is not  Dylan Thompson’s inconsistent passing.  It’s a defensive unit that (despite showing improvement each week) remains among the nation’s worst.

In fact poor defensive play has forced Thompson into frequent situations where he was under pressure to make things happen on his own – as opposed to the grind-it-out nature of the 2011-13 Gamecocks.