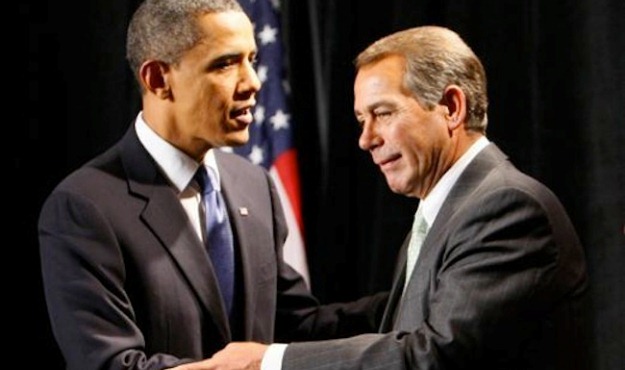 ANOTHER TAX HIKE OFFER MADE TO BARACK OBAMA

You can’t negotiate with terrorists, people … especially class warfare terrorists who are hellbent on redistributing wealth on a massive scale. Yet for reasons surpassing understanding, U.S. Speaker John Boehner (RINO-Ohio) is still attempting to negotiate with U.S. President Barack Obama on the “fiscal cliff.”

Boehner’s latest offer?  A new tax hike on millionaires that would be levied on top of the $800 billion in tax increases he’s already proposed.  And yes … these are the so-called “Republican” proposals we’re talking about.

So … will Obama take Boehner’s latest deal (which pushes the GOP tax hike proposals over $1 trillion)?  Of course not.  Obama wants to go over the fiscal cliff – and if he doesn’t get everything he’s demanding, that’s exactly what’s going to happen.

In addition to $1.6 trillion in tax hikes, Obama is insisting Congress give him unilateral authority to raise America’s debt ceiling any time he wants – by any amount he wants.  In other words he’s seeking a blank check to pursue precisely the same policies that have landed our nation in its current morass.

Insanity … and rather than standing firm against this nonsense, “Republicans” are caving at every turn.

Obamacare Exchanges: Most States Opt Out