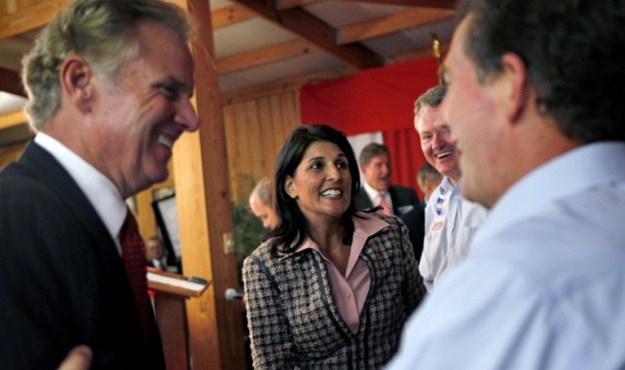 S.C. Gov. Nikki Haley has been warned by the NAACP not to pick former S.C. Attorney General Henry McMaster as an interim replacement for the U.S. Senate seat being vacated by Jim DeMint.

Why not?  Because of McMaster’s membership in a “whites only” country club.

In a letter to Haley from S.C. NAACP president Lonnie Randolph, Haley is asked to “eliminate any candidate who belongs to any club, organization or association that excludes African-Americans or other minorities.”

Along with several other prominent politicians (including S.C. Senate President John Courson), McMaster is a member of the Forest Lake Country Club in Columbia, S.C. – which excludes black members.

“I  hope it is abundantly clear that the position of United States Senator should not be held by individuals who have chosen to make such associations with organizations whose policies and actions perpetuate and promote the longstanding racial divisions in our state,” Randolph adds.

Haley did not immediately respond to our request for comment on Randolph’s letter.  McMaster is one of five candidates on her “short list” to replace DeMint – along with U.S. Rep. Tim Scott, former S.C. First Lady Jenny Sanford, U.S. Rep. Trey Gowdy and S.C. Department of Health and Environmental Control (SCDHEC) director Catherine Templeton.

As we noted in our recent assessment of Haley’s short list, McMaster’s “whites only” problem makes him a real long shot for this appointment – if for no other reason than Haley would have to pass over an African-American front-runner in order to give him the job.

For the record, we don’t think skin color (or gender, or sexual orientation, or religion) should be a factor in electing or appointing people to positions of public trust.  But what about membership in discriminatory groups, though?

We’re not sure … although the NAACP is certainly not at the top of our Christmas Card list.

Our litmus test is simple: Does the candidate stand up for freedom and free markets? If so, we support them.  If not, we don’t.

And on that count, Henry McMaster fails …

Incidentally, former SCGOP chairman Katon Dawson’s affiliation with this club – and his habitual dishonesty in addressing it – was a major issue in the 2009 race for chairman of the Republican National Committee.  In fact it likely cost Dawson that election.

Here is a screen shot of McMaster’s name appearing in the 2008 club directory – part of a series of exclusive reports we published on these “whites only” groups.  During the course of our investigation, FITS also uncovered Dawson and McMaster’s memberships in several other “whites only” social clubs.

Haley has said she will name her interim replacement for this seat by the end of the month – a nod that is widely expected to go to Tim Scott.