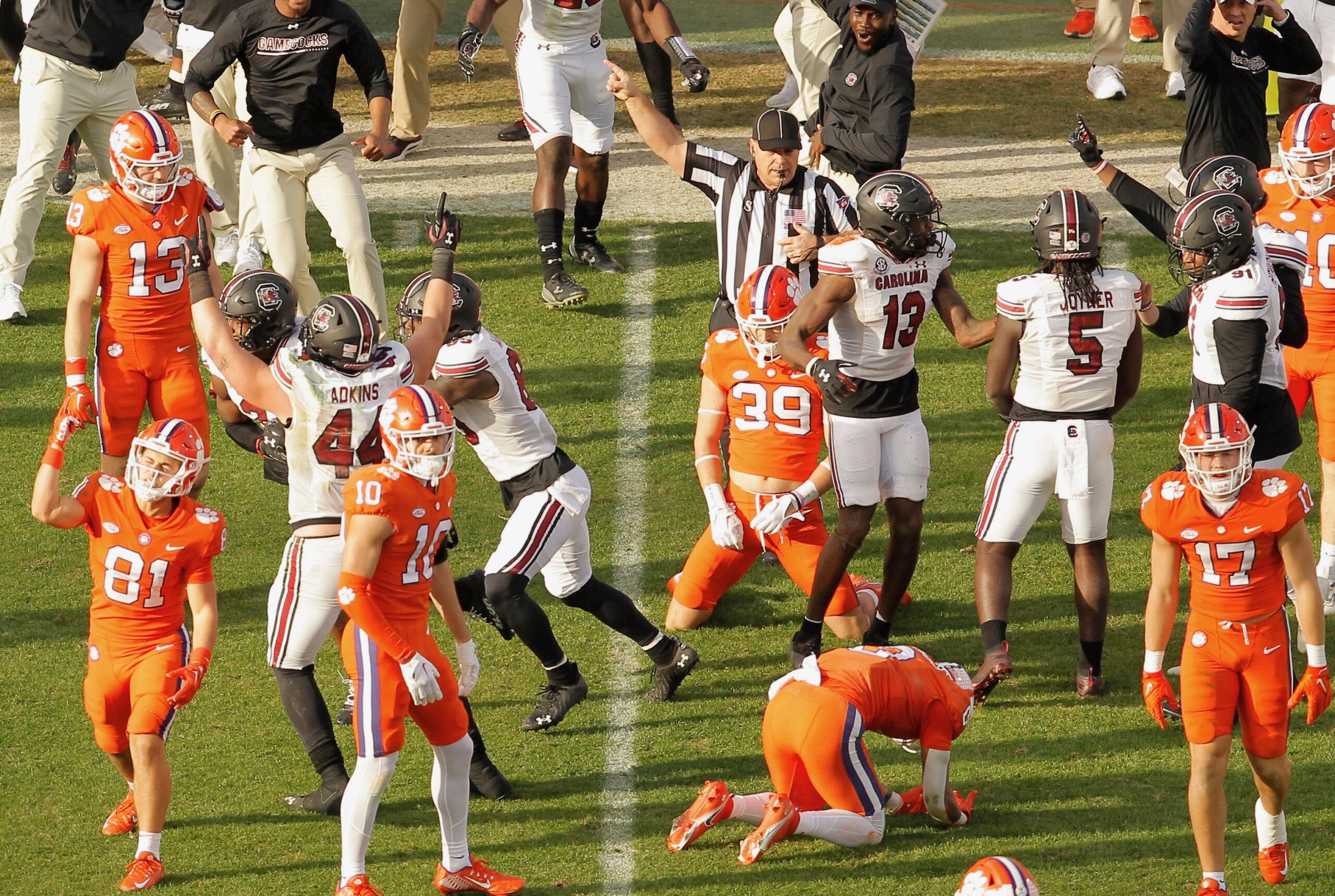 The University of South Carolina football team has prided itself on special teams play under second-year head coach Shane Beamer. And why not? Beamer’s Hall of Fame father, Frank Beamer, relied on special teams en route to wining seven conference championships during his illustrious career at Virginia Tech.

But as I noted following the first game of what certainly appeared to be another a ho-hum season in Columbia, S.C. – what else did South Carolina have?

For much of the 2022 campaign, the answer to that question was “not much” – especially on offense. And especially following a humiliating 38-6 defeat at the hands of unranked Florida in “The Swamp” two weeks ago – a game which saw special teams account for the Gamecocks’ only score.

South Carolina gained just 237 total yards against the Gators – 48 of which came on a pass from punter Kai Kroger to former quarterback Dakereon Joyner on a fake punt. Long-suffering Gamecock fans were livid following this performance – as Florida was supposed to have been the only game on the reinstated “Orange Crush” portion of South Carolina’s late season schedule that the Gamecocks had a shot at winning.


On Saturday in Death Valley, though, “Beamerball” breathed new life into the Gamecock program – causing a key turnover late in the game that gave South Carolina a chance to end its near-record run of futility against the No. 8 Clemson Tigers.

After true freshman defensive back Nick Emmanwori of Irmo, S.C. pounced on a fumble by Clemson punt returner Antonio Williams, the Gamecocks’ office sealed the deal against one of the elite programs in America – proving last week’s 63-38 blowout victory over No. 5 Tennessee was no fluke.

In the shadow of a seven-game skid in this long-running rivalry – not to mention the Tigers’ 40-game home winning streak (the longest active home winning streak in all of college football) – much-maligned starting quarterback Spencer Rattler hit junior wideout Antwane “Juice” Wells Jr. (above) in the flat for a five-yard gain to give the Gamecocks the game-clinching first down.

Wells caught nine passes for 131 yards and two touchdowns against Clemson – giving the 6-foot-1, 207-pound Richmond, Virginia native 20 receptions for 308 yards over the final two games of the season.

The play made a prophet out of Beamer, who told ESPN’s Molly McGrath at halftime “we’re going to win in the second half because of him (Rattler).”

ESPN’s win probability index gave South Carolina a mere 8.2 percent chance to do that at the time – but Beamer’s faith in his quarterback was rewarded.

Beamer stuck with Rattler despite two incredibly costly interceptions in the first half – one of which was returned for a touchdown by Clemson linebacker Jeremiah Trotter Jr. and the other which killed a critical second quarter drive on a second down and goal from the Tigers’ two-yard-line.

Beamer also stuck with Rattler (above) despite a mostly disappointing 2022 season that had a significant chunk of Gamecock Nation calling for his benching following the Florida game.

Rattler responded to those calls by throwing for a career high 438 yards and six touchdowns against the Vols and another 360 yards and two scores against Clemson. The former Heisman Trophy frontrunner – who played his first two seasons at Oklahoma – also ran for a score against the Tigers.

Not bad for a guy who was held to 200 or fewer passing yards in six of South Carolina’s first ten games – and who entered the final two games of the season with more interceptions than touchdown passes.

After being labeled a colossal disappointment through the first ten weeks of the 2022 campaign, the 6-foot-1, 215 point signal-caller from Phoenix, Arizona is now the only quarterback in program history to defeat Top Ten opponents in back-to-back weeks.

Somebody cue Vanessa Williams … ‘cause Rattler saved his best for last.

Same goes for embattled offensive coordinator Marcus Satterfield, who followed up his masterpiece against Tennessee with another gem against the Tigers – who entered Saturday’s rivalry game ranked No. 18 nationally in total defense.

Beamer could have very easily bowed to the pressure and jettisoned Satterfield – or at the very least demoted him – at multiple points during the 2022 campaign. But he stuck with him – and now looks like a genius for doing so.

For Clemson (10-2, 8-0 ACC), Saturday’s game not only ended its program-record home winning streak – and its recent rivalry run over the Gamecocks – but dashed the Tigers’ College Football Playoff (CFP) hopes.

Clemson had reached the CFP six times over the last seven seasons – appearing in four championship games and taking home pair of national titles following the 2016 and 2018 campaigns. This year’s playoff path for head coach Dabo Swinney would have been a bit steeper than in seasons past – but a win over South Carolina and a conference championship victory over North Carolina could have put the Tigers in the final four with a little help from some of the teams ranked ahead of them.

It wasn’t meant to be, though, as the Tigers’ offense sputtered in the second half under second-year starter DJ Uiagalelei – who completed only eight of 29 passes for 99 yards with a touchdown and a costly fourth quarter interception to junior cornerback Marcellus Dial.

Clemson’s nonexistent aerial attack spoiled another stout outing from sophomore tailback Will Shipley (above) – who ran for 132 yard on 15 carries with a touchdown. Defensive coordinator Clayton White’s unit stiffened against Shipley in the second half, though, holding him to just 33 yards during the final thirty minutes of the game.

Shipley’s performance put him over the 1,000-yard mark for the season, though.

The win was South Carolina’s first over Clemson since 2013 – the end of a five-game winning streak in this series under former Gamecock head coach Steve Spurrier. Clemson still owns a 72-43-4 advantage in the rivalry, which had been played uninterrupted for 111 years prior to the 2020 game being canceled due to Covid-19.

What’s next for these two programs? As mentioned above, Clemson has a date with North Carolina in the 2022 ACC championship game next Saturday (December 3, 2022). A win there and the Tigers would head to the Orange Bowl in Miami, Florida on December 30.

South Carolina had been pegged for either the Gator Bowl or the Reliaquest Bowl prior to Saturday’s win over Clemson, but we will have to see if the Gamecocks (8-4, 4-4 SEC) improved their positioning with yet another upset victory over a Top Ten program.

Clemson Is Classing Up The Championship Game