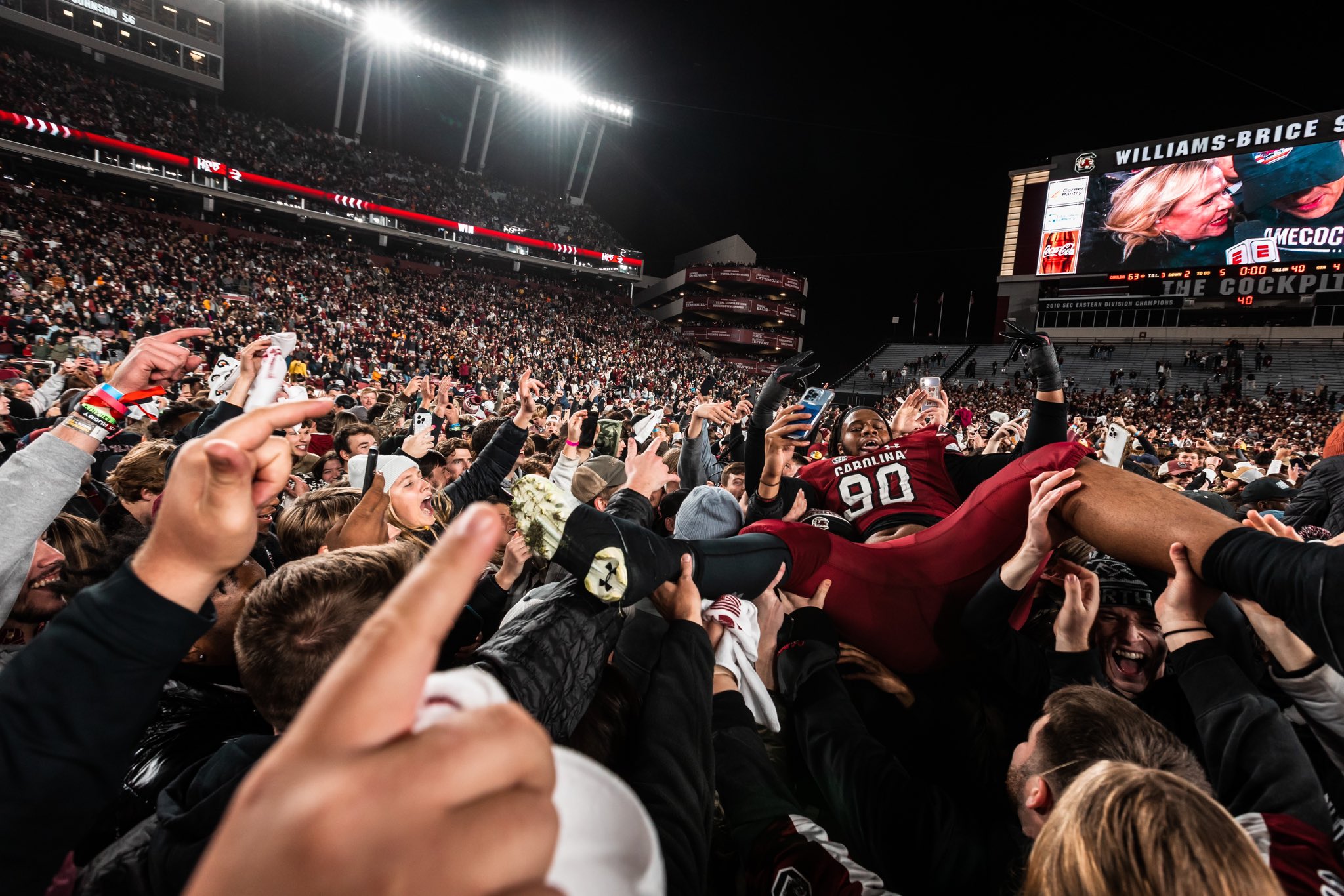 A week ago against unranked Florida, the University of South Carolina offense amassed precisely zero points and gained an anemic 237 yards en route to a humiliating defeat in ‘The Swamp,’ The only points the Gamecocks scored during the game? A 48-yard touchdown pass from punter Kai Kroger to former quarterback Dakereon Joyner on a fake punt …

That special teams strike was the longest play from scrimmage for South Carolina against the Gators … and accounted for one-fifth of the team’s total yardage.

Following the debacle in Gainesville there was speculation South Carolina offensive coordinator Marcus Satterfield would be fired (and genuine amazement when he wasn’t) – while heralded transfer Spencer Rattler’s embarrassing 21.9 quarterback rating led to calls for his benching.

On Saturday night at Williams-Brice Stadium in downtown Columbia, S.C., though, the script flipped – with these two helping write a Gamecock redemption story absolutely no one saw coming.

With his top two tailbacks out the lineup due to injuries, Satterfield called the game of his life. And Rattler (above) turned in the performance of his career to lead South Carolina to a stunning, season-defining 63-38 upset of No. 5 Tennessee.

The last time an unranked team scored that many points against a Top 5 opponent in the poll era?

That’s right … it had never happened.

South Carolina amassed a season-high 606 yards of offense – well above its 355.2 per game average heading into the game – in addition to the staggering 63 points it hung on the Volunteers. The Gamecock scoring machine was so prolific, in fact, that the Williams-Brice pyrotechnical crew literally ran out of celebratory fireworks.

As for Rattler, the 6-foot-1, 215 point signal-caller – whose first year in Columbia, S.C. has been a bust – channeled his inner Patrick Mahomes en route to the sort of performance that made him a Heisman Trophy frontrunner two years ago at Oklahoma.

“Man that one felt good,” Rattler tweeted after the game. “Wouldn’t want to do it with anybody else. Love this team.”

His top target? Junior wideout Antwane “Juice” Wells Jr., who caught a career-high 11 passes for 177 yards – although twelve Gamecocks (including Rattler) caught passes on the evening. Meanwhile, junior tight end Jaheim Bell – whose conspicuous absence from the offense in recent weeks had contributed to the elevated temperature under Satterfield’s seat – filled in capably at the running back position.

Bell rushed 17 times for 82 yards as he stepped in for injured tailbacks MarShawn Lloyd and Christian Beal-Smith. He also caught five passes for 39 yards and a pair of touchdowns.

Tennessee – which had won three straight in the series – had no answer for the Gamecock offensive onslaught, which put up its highest point total in a game since hanging 70 on Charleston Southern four years ago.

South Carolina avenged a 45-20 defeat it suffered at the hands of the Volunteers in Knoxville a year ago – and ended a three-game losing streak in this series. The win was also the Gamecocks’ first over a top five opponent since knocking off then-No. 3 Georgia in Athens in 2019.

The Gamecocks (7-4, 4-4 SEC) have now matched their win total from a year ago with two games remaining on their schedule – a rivalry matchup against No. 9 Clemson on Saturday and their eventual bowl game. If second-year head coach Shane Beamer wins both of those contests, he will be one game ahead of where his predecessor Will Muschamp was following his first two seasons in Columbia, S.C.

“We’re just getting started,” Beamer told ESPN’s Holly Rowe after the Tennessee upset as South Carolina fans stormed the field around him.

The Clemson game will not be easy. Head coach Dabo Swinney’s Tigers have won seven in a row in this rivalry (not counting the 2020 forfeit). They have also won forty games in a row at home. Clemson pummeled Miami on Saturday at home to secure its twelfth consecutive ten-win season.

Can Beamer’s team pull off another upset? It depends which offense shows up …