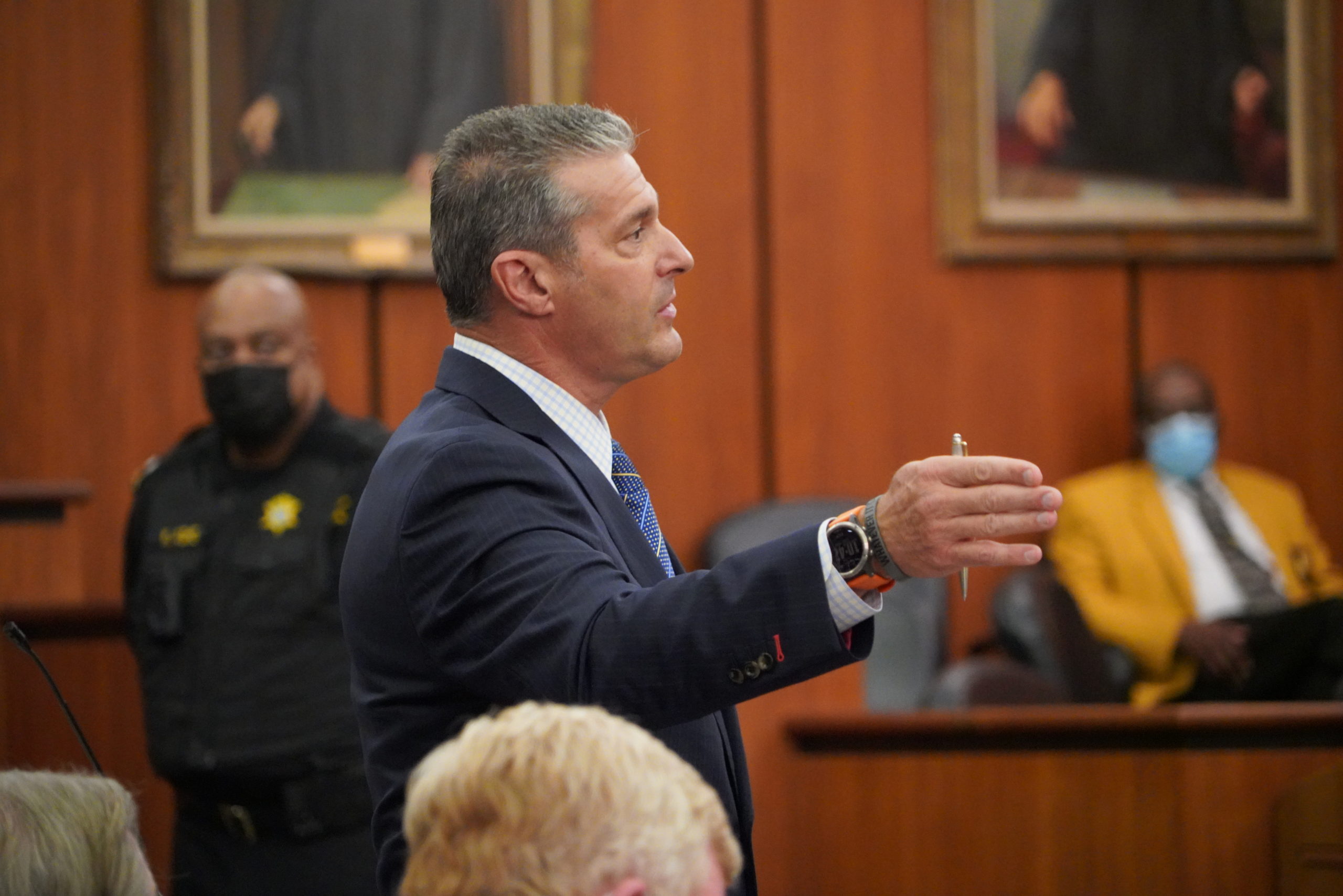 In a response filed Monday at Hampton County Courthouse, the lawyers representing Parker’s Kitchen CEO Gregory M. Parker say they do not object to Alex Murdaugh‘s $4.3 million confession of judgment in the Satterfield case, but do take issue with the Satterfield’s attorney, who they say threatened them.

The lawyers are representing Parker in five lawsuits related to a 2019 boat crash in which Hampton teenager Mallory Beach was killed.

On Saturday morning, FITSNews exclusively reported that in an email late Friday afternoon, Parker’s attorneys had lodged their objection to an agreement reached by the co-receivers overseeing Murdaugh’s finances; Renee Beach, the mother of Mallory and a potential creditor of Murdaugh; and the attorney for Gloria Satterfield‘s family.


The parties to this confession of judgment were advising Judge Daniel Hall, who is presiding over the Beach wrongful death case, that since all parties were in agreement, there was no need for a hearing and he was free to sign the proposed consent order as he wished.

Parker’s attorneys put a halt to that.

Greg Parker and Parker’s Kitchen are not parties to the confession of judgment, nor the Satterfield case. They were copied on the email because they are parties to the Beach wrongful death case.

The confession of judgment is related to the death of Murdaugh’s longtime domestic worker, who helped raise Murdaugh’s two sons.

Satterfield’s family sued Murdaugh in 2018 after Gloria died as a result of a trip and fall incident at the Murdaugh family’s Moselle hunting property.

The entirety of their settlement was stolen in a scheme allegedly led by Murdaugh, who is currently incarcerated at Richland County Detention Center and faces 78 charges, most of which are related to the theft of nearly $9 million from client settlements.

In November, Beach’s attorney, Mark Tinsley of Gooding and Gooding, asked the court to freeze Murdaugh’s assets and appoint receivers to comb through and account for the totality of his assets.

Though Murdaugh is admitting to owing the family $4.3 million, multiple sources have told FITSNews that the family is unlikely to receive that amount. The consent order accounts for this and acknowledges that Murdaugh’s assets will ultimately be distributed among a yet-to-be-determined number of creditors. That distribution would be determined by a judge.

For Murdaugh’s confession of judgment to be valid, the receivers and Beach had to agree to it.

Objection Was To Phrasing, Not Confession Of Judgment

Parker’s attorneys contend that they never objected to the confession of judgment but were simply requesting more time to consult with their client about it.

In the Friday email, a representative for the co-receivers told the judge that “all parties are in agreement,” to which Parker’s attorney David Williford of Huff, Powell and Bailey in Greenville responded “yet we are not — certainly not at this time.”

Sources have told FITSNews that Williford’s email surprised the recipients because the confession of judgment did not affect his client and his inclusion in the email was merely a formality. Multiple sources have said they regarded Williford’s reply to be an objection.

According to their response, the issue they had with the consent order was not the order itself but the phrase “especially since all parties are in agreement,” because technically this was not true.

Parker’s attorneys “certainly knew that it was not exactly accurate (though unintentionally) to state that ‘all parties are in agreement’ because the undersigned was never told about a proposed consent motion.”

“Simply on that basis,” they wrote, they replied to everyone to let them know that they had not consented to the order “only because Defendant Parker’s and the undersigned counsel did not know anything about a proposed consent order.”

Murdaugh’s confession of judgment has been in the works since December 2021, when his attorneys announced his intention to do so at a bond hearing.

Last month, Parker appears to have replaced most of his legal team of three years with the current lineup.

It is unclear when Smith joined Parker’s legal team, but in September 2021, he filed a notice of appearance for a hearing in which Parker’s sought to change trial venue from Hampton County to Beaufort County.

At the time, Smith was chairman of the powerful House, Ways and Means Committee and chairman of the S.C. Judicial Merit Selection Commission (SCJMSC), a panel responsible for determining which judges get to stand for election before the state legislature.

Also at that time, Judge Hall was up for re-election.

FITSNews founding editor Will Folks wrote about Smith’s appearance at the hearing: “This judge is being asked to impartially rule on matters in which one of the attorneys arguing before him holds the keys to his future on the bench — mere months before he is to stand for reelection. And that attorney, it would appear, is not at all shy about turning those keys as he sees fit …”

Hall ruled in favor of the Beach family and the case remains in Hampton County.

In Monday’s response, Parker’s attorneys stated that they “would like to be included in any discussions about consent motions, as any such motions might affect our client’s rights.”

Parker’s attorneys point out that they never took a “substantive position” on the consent order but instead felt that their client was entitled to consider what impact a proposed consent order might have on his own liability in the Beach case.

“Discussions between attorney and client likely would consist of issues such as ‘standing’ (i.e. — does Parker’s even have a right to object?) …,” the attorneys wrote, noting that it is their duty to make sure their client is educated on issues before taking action.

‘The Public Has Just About Had Enough Games From Your Client’

Also in their reply, Parker’s attorneys accuse Satterfield attorney Eric Bland of “threatening to and actually contacting the media if the purpose is to improperly attempt to gain an advantage in litigation.”

FITSNews learned of the email to Hall from multiple sources Friday evening and requested a comment from Bland on Saturday morning.

Parker’s attorneys say that Bland “who is not even an attorney of record in the Beach v. Parker’s et al case” had suggested Friday night that if Williford did not rescind his “objection” that he would “make sure that the public … is properly educated on the stunt Parker’s convenience store and you are trying to pull.”

According to the filing, Bland told Williford, “I think the public has just about had enough games from your client.”

Bland also told Williford that he and his law partner would file “a separate motion for sanctions and costs against your client and you” if they did not withdraw their objection.

Parker’s attorneys also say Bland emailed them about their partner P.K. Shere, asking “Who is this guy?” and stating “Whoever he is, he ain’t the new sheriff in this town.”

On Tuesday morning, Bland confirmed the emails and told FITSNews that his understanding was that Parker’s attorneys had been made aware of the consent order in March and did not raise an objection until Friday’s email.

“The bottom line is, if you weed your way through all the machinations of the lawyers, they had zero basis to interject themselves into the confession of judgment that Alex Murdaugh was giving to the Satterfield,” Bland said.

The attorneys accused Bland of making statements in order to affect the outcome of the Beach case.

“I’m not a party, my clients are not a party, to that case, meaning I’m absolutely free to make any comments I want as long as they’re truthful,” Bland said Tuesday. “They’re free to comment as they wish on the Satterfield case. That is what free speech is all about.”

Bland said he would continue to talk to the press as he saw fit “so long as I’m truthful, in accordance with 3.6 in the Rules of Professional Conduct and if I’m not involved in that particular case.”

“The FITSNews journalists nor any other journalists give me editorial oversight of what they write in their articles,” Bland said. “It’s called an independent press for a reason.”

Guest Column: Our Generals are Failing Us