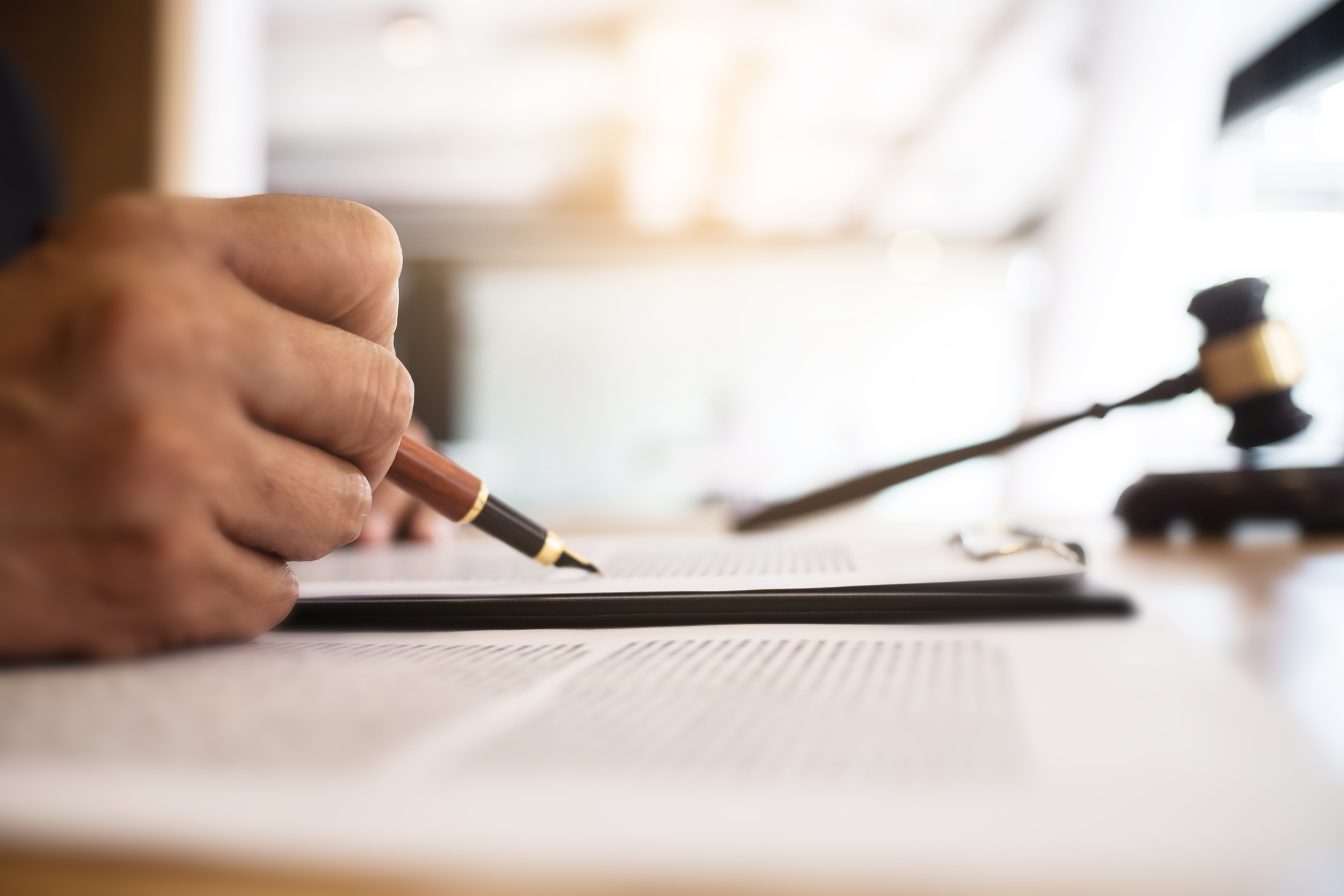 There was a big story in The (Charleston, S.C.) Post and Courier last week from reporter Seanna Adcox detailing allegations against South Carolina circuit court judge Thomas Russo. According to Adcox’s report, the Florence, S.C. judge – who has spent the last sixteen years on the bench – withdrew his name from consideration for another term over “accusations that he berated people in court and discriminated against female attorneys.”

Adcox claimed this account was “confirmed” by S.C. Senate judiciary chairman Luke Rankin, one of the influential lawyer-legislators in Columbia, S.C. who participates in the Palmetto State’s interminably corrupt judicial selection process. This process – which we have criticized for years – essentially consists of lawyers in the legislative branch picking the judges before whom they try cases.

Or, as is increasingly the case, picking judges who give them hall passes when it comes to having to appear in court …

Last week, Russo withdrew his name from consideration before the S.C. Judicial Merit Selection Commission (SCJMSC), a legislatively controlled panel that selects the candidates who stand for judicial election each year. Rankin and five of his fellow lawmakers sit on this panel – and not surprisingly, all five of them are attorneys. Among them? A senator with some serious conflict of interest issues and a House leader who was recently in the news for receiving hall passes from a circuit court judge.

In addition to controlling which candidates stand for judicial election, lawmakers then get to vote on these candidates – a process which typically ends up with them choosing their former legislative colleagues, spouses, law partners, etc.

Incestuous … not to mention anathema to the notion of equal justice.

Anyway, this news outlet began receiving tips late last week about Adcox’s story – from attorneys, judges, lawmakers and others familiar with Russo’s decision to step down. Not one of them endorsed the view parroted by the Post and Courier – per Rankin (below).

In fact, we spoke to one liberal lawyer who insisted that Russo was “always good” to her – and that while he was “too preachy and Bible-beating for a man in a position of public power” that she had never personally “had a bad experience beyond having to listen to his bench sermons.”

A conservative female attorney we spoke with concurred with this assessment of Russo.

“He has always been fair to me,” said the lawyer, who has a practice in the Midlands region of the state. “Where is this even coming from?”

According to Adcox, Russo stepped down in light of “bad reviews from an anonymous survey of attorneys statewide.”

She added that one of these reviews referred to Russo’s “outbursts (as) nothing short of legendary” while another accused him of calling female attorneys “liars.” According to our sources, though, these alleged temperament issues had nothing to do with Russo’s decision not to seek another term – although one legislative source we spoke with did tell us “those kinds of stories were floating out there about this guy.”

That may be true, but those reports had nothing to do with the real reason Russo reportedly decided to give up his reelection bid. According to our sources, the judge was confronted in a closed door screening meeting with a series of social media posts (and comments) he allegedly authored. These posts were said to have included racist remarks and clear ideological moorings – beliefs that legislative screeners took as evidence of bias. Russo defenders claim there was only one “offending” post – a video he shared on Facebook in which U.S. presidents Donald Trump and Bill Clinton offered similar views on the issue of immigration.

Still, judges are expected to adhere to a higher standard when it comes to expressing their personal views on social media. In fact, many judges abstain from social media altogether for this very reason.

“As a judge you just can’t do (what Russo did),” a veteran Palmetto State attorney told us, referring to Russo’s alleged public statements against “liberals” and “immigrants” as inappropriate and “the sort of thing that gets you into trouble.”

Others claim Russo is being singled out for his recent decision to throw out a massive settlement associated with a wrongful death case – one which involves influential S.C. House ways and means chairman Murrell Smith (who also sits on the SCJMSC).

On November 1, Russo issued an order (.pdf) vacating a $21 million judgment in a wrongful death case involving an undocumented Mexican immigrant who died Colleton county, South Carolina – granting a new trial to the defendants in that action.

“After careful review of all the evidence in this case to support the amount of damages proven by Plaintiff, it is the opinion of this Court that to reduce the damages to the amount supported by the evidence would be such a small fraction of the $21 million dollars awarded by the jury as to make the award by the jury grossly excessive by comparison; therefore, the Defendant should be awarded a new trial,” Russo ruled.

“Murrell was extraordinarily angry,” a source familiar with the case told us.

Smith (above) and another attorney for the plaintiff vehemently objected to Russo’s decision in a November 12 filing (.pdf), claiming the judge’s order “misinterprets the proof requirement for survival and wrongful death, violates the standard of viewing the evidence in a light most favorable to Plaintiff, and fails to identify any trial event or outside influence as a basis to vacate the verdict.”

“The Court has simply substituted its own view of the case for that of the jury and thrown out the verdict,” Smith and his co-counsel wrote, referring to Russo.

We reached out to Smith for comment but he told us he had none – having recused himself from SCJMSC deliberations regarding Russo’s candidacy.

“I recused myself from that screening,” Smith told us.

Another theory involving Russo’s decision to step down centers around Rankin’s reported preference for attorney Alex Hyman of Conway, S.C. as a candidate for one of the sixteen at-large circuit court judgeships in the Palmetto State. In addition to these seats, thirty circuit court judges are elected by lawmakers to preside over specific jurisdictions.

Russo is an at-large judge.

“Rankin wants Hyman in,” a source familiar with the situation told us, adding that the drama over Russo’s social media posts was “just an excuse to fire the judge.”

Another source indicated Rankin was taking advantage of the perception that Smith was pushing Russo’s ouster in the aftermath of the wrongful death dispute to leverage support for his preferred candidate.

Our view? We have no opinion when it comes to Russo’s temperament or his alleged biases. We do not know the man, nor have we seen any of the evidence allegedly put forth against him. Accordingly, we do not subscribe in whole or part to any of the theories advanced in connection with his looming ouster. We do, however, believe that situations like this one underscore (again) the pressing need to extricate the legislative branch from the judicial selection process … permanently and completely (well, with the exception of senators having an advice and consent role on executive appointments similar to the federal model).

“Lawmakers have demonstrated time and again they simply cannot be trusted to appoint qualified judges in a transparent and ethical manner,” we wrote earlier this year.

And while this may very well be a case in which there is no legislative interference (which may very well involve a judge who deserves to be ousted for legitimate reasons), lawmakers have created a process that cannot be trusted.

Accordingly, they should not be surprised when no one trusts them.

“The legislature has no business making these decisions,” one of our sources noted.

Once again … we concur.

Also, whatever non-legislatively controlled screening process is ultimately adopted for judges in South Carolina it must be transparent. Allegations against judges must be made public, and judges must be given the right to address those who accuse them of misconduct or ethical lapses.

Ready for the kicker? This saga could escalate in the days to come as sources familiar with the situation tell us Russo is taking the Thanksgiving holiday to determine whether to follow through on his decision to step down.

Should he rethink his decision to withdraw, this story could escalate dramatically in the weeks to come …