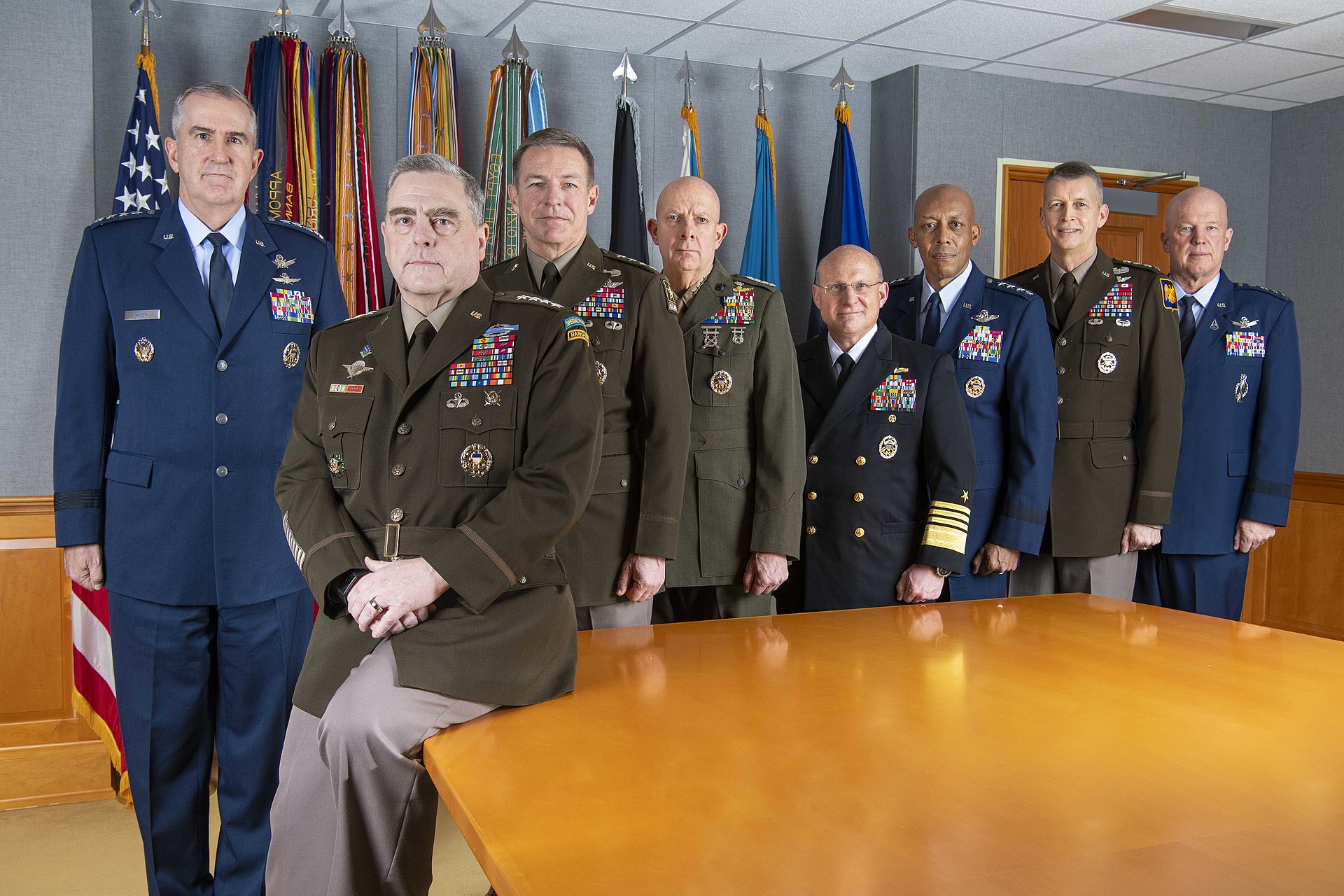 Saying Generals “fight” is, I confess, a bit of an oxymoron. Generals don’t fight anything. Company Grade officers—lieutenants and captains—and enlisted men fight wars. With the exception of pilots, almost everyone else is far from the battlefield—advising, poring over computers, and looking concerned.

What Generals actually do for a living is make the decisions regarding military strategy, equipment, budgets, and who gets what pork.

General officers are fairly old men … and get older as they rise. This is important to understand, as by the time you are the Chairman of the Joint Chiefs blathering about “white rage” and co-ed infantry units, you haven’t heard someone speak their mind in a decade: No has said, “That’s idiotic.” “The troops will hate it.” “We don’t need another fighter jet.” “We need to change the way we’re fighting.”

And certainly not, “These rules of engagement are getting men killed, and you need to go public with it.”

Generals believe they are the smartest person in the room. If a Captain spends a year studying the effects of the weight of body armor on the female skeletal frame, and briefs the General on the damage it is doing to female personnel, the General can dismiss it with a smirk and the remark, “Thank you Captain. Please keep me apprised.”

That’s it. The issue is over. Because the General has three stars, and he wants four stars. Congress wants women to die in combat, so peacetime skeletal injuries are of no concern. It’s a very short decision tree for the three-star.

Why does this matter? Because it’s important to understand the psyche of the Generals who make the strategic, tactical, and budgetary decisions that protect the entire free world. Congress and the Commander in Chief ultimately pull the trigger — but it is the Generals that decide what kind of weapon they’ll use, where the weapon is pointed, and the ballistic specs of the bullet they fire.

Our Generals are failing us. The President and Congress are clueless. And it just so happens all these folks are wholly-owned subsidiaries of the military-industrial complex.

Let’s look at an accurate reality: In Afghanistan, a small ragtag group of poorly-armed religious zealots defeated the United States military. Our men and women fought them for 20 years, and they took everything we could throw at them. But because of the emasculated and inept way the Generals and Congress decided to fight, they beat us so badly we waved the white flag and ran. Our troops were magnificent. Their Generals were a joke.

In Ukraine, we see soldiers alongside untrained civilians slaughtering their Russian aggressors. It’s no contest. The Russians are being beaten so badly, their Generals are coming to the front to find out what the hell is going on, and getting shot in the face by snipers.

The realities of combat have changed … and it’s right in front us. And there’s no way we’ll react properly, because our Generals will fight the last “good” war — the one where we used tanks and bombs and cool stuff to utterly destroy the Iraqis … the one that involved the military industrial complex in the biggest way possible. Don’t forget, it’s the military industrial complex who offers these retired Generals and Congressmen board-of-director positions paying Hunter-Biden-level money … based on who gave them the most pork.


The way to win wars in the future is not that difficult to surmise, and our current strategies make as much sense as castles. No, we should not dismantle the entire existing military — but we should sure as hell reconfigure the part that puts boots on the ground and does the actual fighting.

We need lots and lots of infantry, but a new kind of infantry. Men tutored endlessly in small-unit guerilla tactics, with the skills need to fight far away from vast logistical supply areas. How can we do this? Quit pretending that everyone in Special Forces needs to be a Superman, and train everyone in Special Forces methods. No, your average Marine or Soldier can’t pass the Navy SEAL School, but SEALs need and want that suffering to build unquestioning trust, because they actually do superman stuff.

Let the SEALS be the SEALS — they are absolute ninjas when operating within 100 miles of water. But a motivated soldier or Marine can certainly be trained as they are in the use of numerous small arms. Small unit teamwork. Basic explosives. Stealth and camouflage. The days of needing tens of thousands of human bullet-sponges operating as cohesive battalions are gone. There hasn’t been that need since Korea.

How do you resupply these small units away from logistics areas? With helicopter drones, flying at treetop level, able to drop food, water and ammo. Maybe we could hire someone from Amazon to figure it out?

We need better and better technology for the infantry. By way of example, why do we have our young men kicking in doors and rushing in, not knowing if the room has armed men in it? They can’t simply throw a grenade in, because it might be just civilians. Why not kick down the door, and fly in a mini-drone with night vision? Look around? Think that would save some lives?

In addition, you can cover a lot of ground if every infantryman has a mini-drone to patrol the city virtually. The mosquito noise of the mini-motors will probably make the enemy blow themselves up.

Speaking of drones, an off-the-shelf civilian drone is strong enough to carry a grenade and takes only an hour or two to master. Not sure if someone’s on that rooftop? Send up a drone for a look-see, and deliver a grenade-gram if there’s a bad guy.

Because of shoulder-fired rockets, most mechanized transportation vehicles are becoming obsolete. Except, of course, the favored vehicle of terrorists and guerrillas: The pick-up truck.

Why do we have billions of dollars in armored vehicles that can be destroyed, killing every man inside, with a $2,000 LAW rocket? Vehicles that require endless maintenance? Hell, a Chevy pick-up will run 40,000 miles before it needs a peek under the hood. If danger is detected, every man is out of the truck and on the ground fighting back in five seconds.

It would be easier to get 500 pick-up trucks to Ukraine than ten armored personnel carriers. And once you get there, you drive them off the ship and you’re combat ready as soon as you load your gunfighters into the bed of the truck. Literally, drive off the ship’s ramp, and you’re ready. They could be deployed in truck teams of three, six, ten — whatever the mission demands.

Does a pickup truck’s lack of armor make the men more vulnerable? In some cases, yes. But given the ease with which one man can now destroy an enclosed armor personnel carrier, I’d take my chances. In addition, you could add some steel plates in the back to offer the troops protection from small-arms fire… a local welder would probably agree to do the first ten for free, if the military gave him some cool stuff he could use for hunting.

For the cost of an aircraft carrier, I think it’s safe to say we could go a long way to converting our infantry into a force that could fight in any clime or place against any enemy.

Infantry in pickups can’t win wars… we need airpower. The F-16 is still one of the greatest fighter jets ever made, so we build more. The F-35 offers the ability to operate fighters without a landing zone. A-10 pilots can destroy armored vehicles in their sleep. Drones offer a safe and effective way to drop bombs or fire missiles in enemy areas defended by decent anti-aircraft protection. We have excellent long-range aircraft for transport and refueling. The Army’s existing combat-helicopters are beyond-imagination weapon platforms.

The enemy, of course, also has modern aircraft and missiles, which render our artillery obsolete, as traditional artillery batteries are — at best — sitting ducks. And you have to get the artillery within range of the actual fight. Using Javelins, the Ukrainians are proving “getting somewhere” can be quite a problem.

The Navy is an issue I cannot analyze in great detail, as I’m not educated in anti-ship weapons. Is the era of naval power over? If one looks at the Navy’s current mission, the answer is probably “to some degree.” After all, our greatest naval power is the aircraft carrier task force, which requires a half-dozen other support ships. An enemy’s hypersonic missile could destroy the carrier with ease, leaving the surviving ships devoid of defensive airpower.

Submarines will always be important as both nuclear and cruise missile platforms, as well as for tracking and sinking enemy ships. The supply-ship Navy is important, as is the amphibious Navy—we need to get our troops and bulk supplies to the places we fight. Perhaps we could protect them with an escort provided by fast-attack submarines and destroyers? Give them some of their own onboard defense systems? But what do I know — I’m a Marine … you’d have to ask a junior officer in the Navy to get real insight. Rest assured they’ve thought it through a great deal more than their Admirals, because they’re actually at sea… with their life on the line.

The war in Ukraine makes clear the existing tactics and warfighting methods the US currently utilizes are obsolete. Our methods simply cannot defeat guerrilla fighters, and we fought guerillas in Vietnam, Afghanistan, Iraq, and now the Ukrainians are wiping out Russia using these tactics. Is anyone else sensing a trend here?

Our war machine is designed to fight a war using the same tactics Russia is now using, and the Ukrainians are obliterating them. If we have to fight an army like Russia’s, we simply put boots on the ground and employ Ukraine’s tactics… even on the offense. And remember, many of Ukraine’s defenders are entirely untrained. Imagine what tens of thousands of American warriors relentlessly trained in those tactics could do.

A chink in the armor the United States military will always have is morality. We fight wars in accordance with basic human decency. Our enemies do not.

It is much more effective to level a town of civilians where enemy combatants are hiding than to enter it and root out the enemy one-by-one … but the cost of killing civilians is the humanity and post-war sanity of our warriors.

If you know any of the Joint Chiefs personally — or anyone on the Congressional Arms Committee — maybe send this along. I’m happy for them to take the credit for the ideas if they’ll save American lives doing so — all it would cost is some egos, humility, and post-retirement lobbyist jobs or Hunter-Biden-Board-Seats.

But don’t get your hopes up. Most of them would much rather have young men die than lose their seat at the bar.