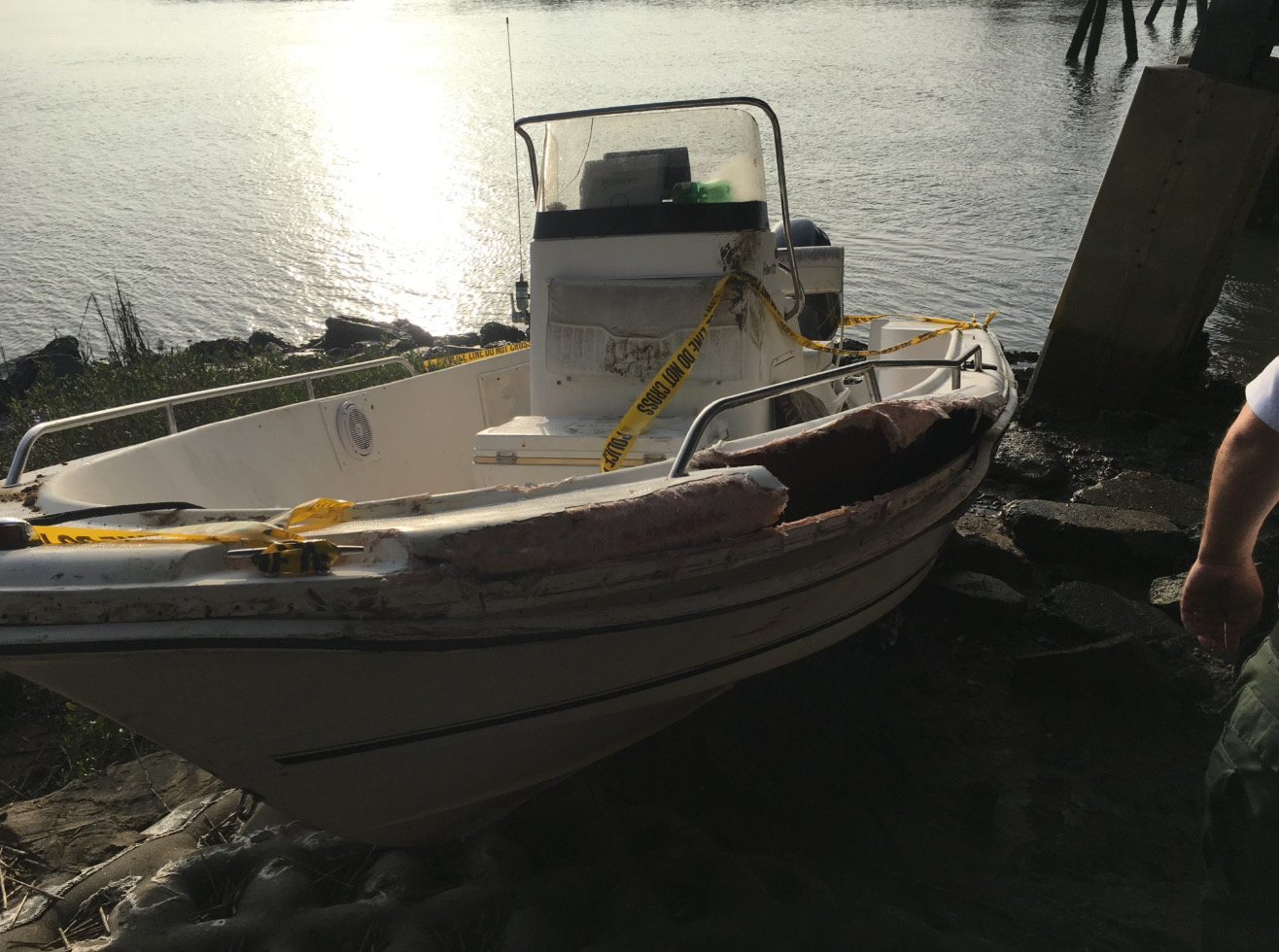 By MANDY MATNEY and LIZ FARRELL ||

Morgan Doughty and Miley Altman are the last two passengers to file suit in the crash, which left both women injured. The complaints were filed separately in the Hampton County Courthouse on Monday.

Paul Murdaugh was killed in June 2021 along with his mother, Maggie, at the family’s Moselle property in Islandton, South Carolina. At the time of his death, he was facing three felony Boating Under the Influence Counts for the crash.


Mallory Beach, 19, was killed in the crash, which occurred when Paul allegedly drove his parents’ boat into a bridge just outside Parris Island.

Doughty and Altman were both close friends with Beach. The three friends worked together in Beaufort at the time of the crash.

They join defendants Alex Murdaugh, Buster Murdaugh, Gregory M. Parker and Parker’s Corporation, who were named in the original wrongful death lawsuit filed by the Beach family in 2019.

The Beach family planned to add the estates of Maggie and Paul to their list of defendants as well, according to their attorney Mark Tinsley, but have not been able to because the original defendants are obstructing the addition.

“Neither the Murdaughs nor Parker’s have consented to the amendment to add the estates of Maggie and Paul to the Beach family complaint,” Tinsley told FITSNews on Tuesday morning.

Tinsley said that if Parker’s and the Murdaughs won’t agree to the amendment he plans to file an entirely new lawsuit and consolidate with the original one.

Why add the estates as defendants?

Adding the estates to the lawsuits might help eliminate further legal confusion over Alex’s and Buster’s assets.

After a bizarre “assisted suicide for hire” situation involving Alex Murdaugh in September, Tinsley filed lis pendens against the Moselle property and an Edisto Beach home, both owned by Maggie, in an effort to prevent Alex Murdaugh, the beneficiary of Maggie’s estate, from liquidating those assets ahead of the Beach trial.

The lis pendens were filed before it was known that Alex Murdaugh had apparently been stealing from clients for years. He now stands accused of stealing more than $8.4 million so far and faces 74 charges, most of them felonies. He has been held at the Richland County Detention Center since October.

The boat had six passengers onboard, including Connor Cook and Anthony Cook, both of whom have already filed lawsuits against Alex and Buster Murdaugh and Parker’s, the gas station where Paul purchased alcohol before they set out that night for an oyster roast outside of Beaufort.

The video below shows surveillance footage of the last hours leading up to the crash that killed Mallory Beach on Feb. 24, 2019.

“By condoning and facilitating Paul Murdaugh’s alcohol purchases and consumption, while entrusting the boat to Paul Murdaugh when they knew or reasonably should have known Paul Murdaugh would be consuming alcohol and operating the boat … Richard Alexander Murdaugh and Margaret Kennedy Branstetter Murdaugh created an appreciable risk of harm to others,” the lawsuits said.

Connor Cook, who was standing next to Paul at the time of the crash and severely injured in the crash, accused the Murdaugh family of trying to set him up as the driver and law enforcement of helping to facilitate that narrative.

The lawsuits also claim that the Murdaughs condoned and at times appeared to encourage Paul’s out-of-control underage drinking.

Further, the lawsuits claim that Paul’s parents allowed him to drink alcohol and “operate vehicles provided to Paul Murdaugh for his use for the convenience” while he was intoxicated.

Alex and Maggie Murdaugh knew of Paul’s excessive drinking and history of reckless behavior while under the influence, according to the lawsuit.

Before the fatal boat crash, Maggie Murdaugh would “like” photos on social media showing her underage son drinking alcohol.

Paul Murdaugh actually spoke to his mother Maggie on the phone in the early morning hours of February 24 — just before the crash, according to the lawsuits.

“However, she failed to stop Paul despite knowing he was intoxicated after having paid for the alcohol he consumed earlier.”

Parker’s “knowingly and willfully” sold alcoholic beverages to 19-year-old Paul Murdaugh, who was using his brother Buster’s identification, according to the lawsuits.

At the time of the crash in the boat owned by Maggie and Alex Murdaugh, Paul was intoxicated by the alcohol that Parker’s illegally sold him, the lawsuits say.

The lawsuits claim that Alex and Maggie Murdaugh knowingly “allowed their minor son to illegally purchase and consume alcohol” and they allowed him to use his brother Buster’s ID.

The lawsuits match up with what a number of sources have told FITSNews about how the Murdaughs allegedly contributed to Paul’s illegal drinking and violent behavior.

In deposition, Connor Cook said that alcohol was openly provided to minors in the walk-in deer cooler at Moselle, where the Murdaughs often hosted parties.

According to multiple depositions, Paul Murdaugh had a drunken alter-ego his friends called “Timmy” who came out on the night of the boat crash.

According to several depositions, Murdaugh’s eyes would get “as wide as half dollars,” without blinking when was in “Timmy” mode. He would hold his hands sprawled out, do erratic movements with his arms, and “… he was an angry drunk too, so you could always tell when he became ‘Timmy.’”

The Final Moments Before The Crash

The lawsuit also claims that a belligerent Paul didn’t stop the boat and let the other passengers get off in the final moments leading up to the crash.

Paul knew everyone was irritated — and taunted his friends by slowing the boat down and driving in circles, witness statements said.

Paul and his girlfriend started to fight. He screamed “horrible” things at her, according to Altman’s statement to SCDNR.

Murdaugh would leave the wheel, walk to the front of the boat to yell at her, while Connor Cook would grab the wheel. This happened three times, according to depositions.

“What are you going to do, hit me like you did all those times before?” Morgan said, according to SCDNR files.

Paul Murdaugh then pushed, spit on, and slapped Doughty, according to depositions.

In the back of the boat, Mallory Beach and Anthony Cook were fed up, depositions say. Mallory yelled at Paul to stop. She said she was scared of his driving.

“He turned and pointed at her, and I could tell he was about to say something and I told him not to make that mistake and he stared at me for a second and went to the steering wheel,” Anthony Cook said in his deposition.

Shortly thereafter, the boat then accelerated rapidly through the winding waterway of Archer’s Creek, according to the depositions. According to its global positioning satellite data, the boat reached speeds over 30 mph — which is a high rate of speed for a small marine vessel.

Moments later — at around 2:20 a.m. EST — the boat hit a piling on Archer’s Creek Bridge, just outside of Parris Island, South Carolina. Paul, Mallory and Anthony were flung into the dark water. All of the occupants were injured. Blood was all over the boat.

That was the last time anyone saw Mallory Beach alive. Her body was found a week later about five miles from the crash scene.

To read the recent complaints, click here and here.