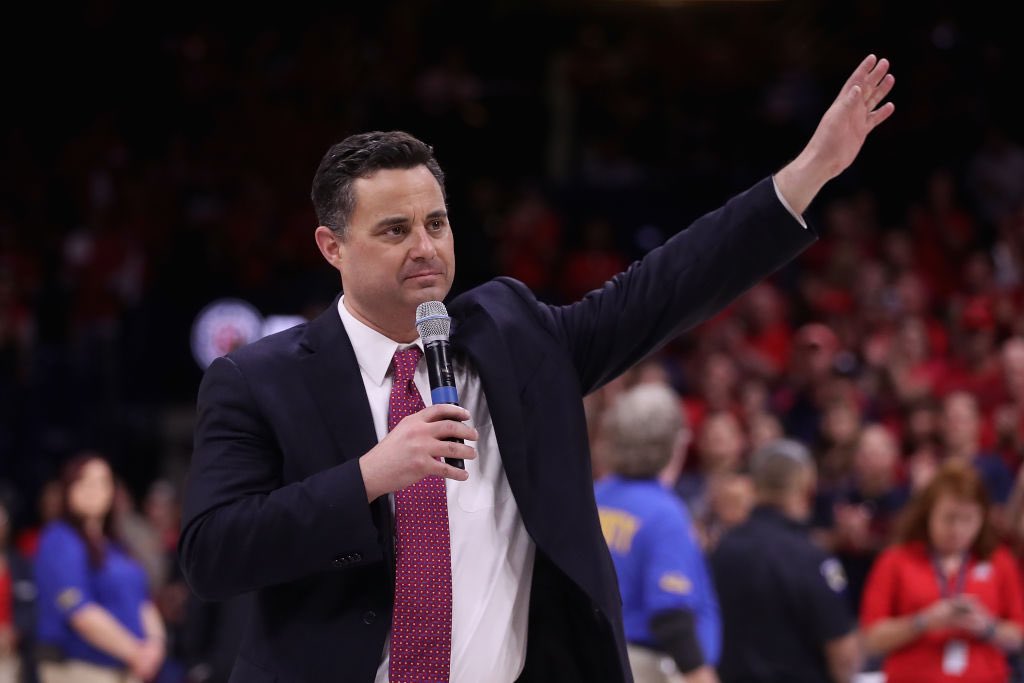 You can put the Columbia, South Carolina steak house controversy about former Arizona head basketball coach Sean Miller to bed … because he’s not coming to South Carolina after all.

Miller, 53, has reached a six-year deal to return to Cincinnati, Ohio and coach the Xavier Musketeers, per Jeff Goodman of Stadium.

A follow-up report from The Cincinnati Inquirer confirmed the news, indicating Miller and Xavier “reached an agreement on Saturday evening.”

After four seasons as an assistant at Xavier, Miller led the Musketeers’ program for five years from 2004-2009 – guiding the team to a 120-47 record, three regular seasons conference titles, a conference tournament crown and four consecutive NCAA tournament appearances (including a run to the Elite Eight in 2008). The native of Ellwood City, Pennsylvania experienced even more success in a dozen seasons at Arizona – including seven NCAA tournament appearances in eight seasons from 2011-2018 (and three trips to the Elite Eight). His Wildcat teams also captured five regular season PAC-12 titles and three PAC-12 tournament championships.

Miller posted a 302-109 record at Arizona, but was fired by the Wildcats last April – a month after the school belatedly released notice of NCAA allegations involving his program.


The NCAA accused two of Miller’s former assistant coaches of accepting cash bribes and obtaining fraudulent academic records for players in connection with the 2017 #HoopsGate scandal. Miller himself was accused of failing to promote compliance and a dreaded “lack of institutional control.”

Was it worse than that, though? In 2019, federal prosecutors pursuing charges against former Arizona assistant coach Emanuel “Book” Richardson played a wiretap in open court in which Miller’s assistant claimed his head coach was paying former Arizona center Deandre Ayton $10,000 a month during his collegiate career.

Nonetheless, Miller could face a potentially significant suspension in the event the NCAA infractions committee were to issue a “show cause” penalty against him like the one handed down against former North Carolina State head coach Mark Gottfried in December.

While Miller’s status with the NCAA was certainly a wild card, his decision to pick Xavier over South Carolina is a major blow to results-challenged Gamecock athletics director Ray Tanner – who fired former head coach Frank Martin last week after ten years at the helm of this historically underperforming program.

Other than its Final Four run five years ago, the Gamecocks have only qualified for the Big Dance once in the last two dozen years. In fact, in 115 seasons on the hardwood South Carolina has appeared in the NCAA tournament just nine times.

With Miller officially out of the running, South Carolina must rethink its coaching search … and readjust its expectations.

According to Matt Norlander of CBS Sports, South Carolina “heavily pursued” Miller – with Tanner trying to land him right up until the last minute. According to Norlander, Miller had a “standing offer” from the Gamecocks but Xavier was “always (his) top choice.”

This is not the first time Tanner has failed to land his man. In 2015, he appeared close to convincing Kirby Smart to accept the Gamecocks’ vacant head football coaching position. Georgia caught wind of the deal, though, and fired Mark Richt to make way for Smart.

Tanner was forced to settle for Will Muschamp – whose tenure in Columbia, S.C. ended in disaster (in more ways than one).

Smart? He just won a national championship at Georgia …


Miller isn’t the only name on the Gamecocks’ short list to choose another school: Dennis Gates of Cleveland State is about to be named head coach at Missouri, according to The (St. Louis) Post-Dispatch.

Matt McMahon of Murray State is another possibility – but he is likely to have offers on the table from other power five programs. Furman head coach Bob Richey is also in the mix, as is Chattanooga head coach Lamont Paris.