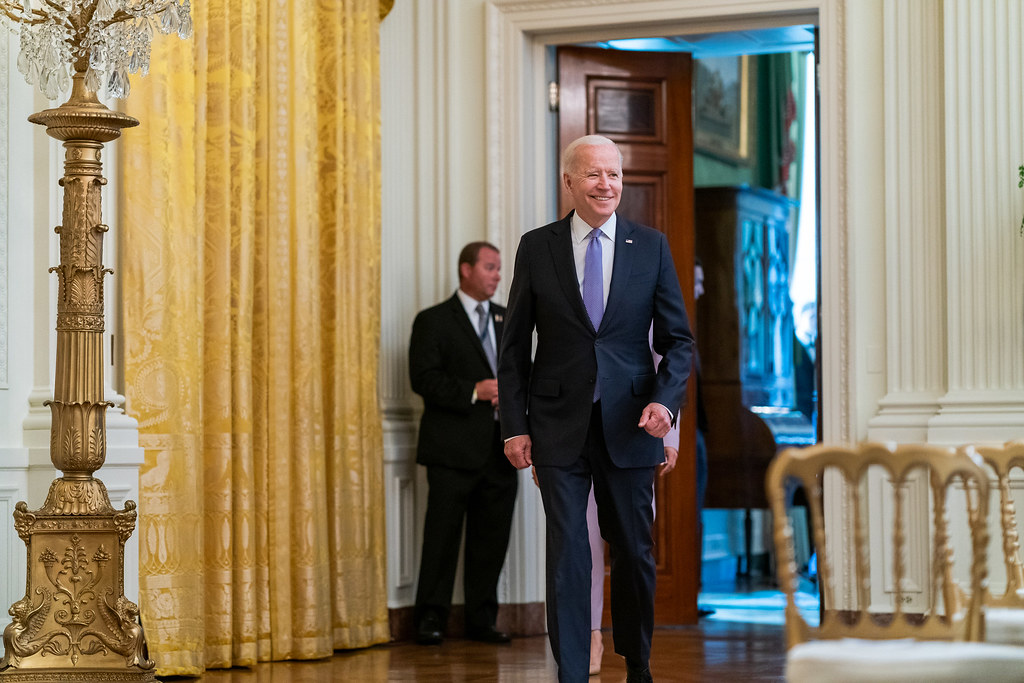 Biden announced this week that he was directing the Occupational Safety and Health Administration (OSHA) to draft a rule which would “require all employers with 100 or more employees to ensure their workforce is fully vaccinated or require any workers who remain unvaccinated to produce a negative test result on at least a weekly basis before coming to work.”

You read that right … private sector companies with more than 100 employees would be required to impose a vaccine mandate.

According to Ilya Shapiro of The Cato Institute, Biden’s proposed private sector mandate – which could impact upwards of 100 million workers – “presents a constitutional triple threat.”

“First, there’s a separation-of-powers issue in that this sweeping new regulation is being imposed by presidential diktat,” Shapiro wrote. “Second, even if the executive branch is permissibly interpreting the relevant federal laws, these kinds of impositions are hardly a regulation of interstate commerce (or the use of any other constitutionally enumerated power). Third, forcing private businesses to do the government’s dirty work isn’t a ‘proper’ means of effectuating the goal of limiting the pandemic.”

Finally, Shapiro raised an important question about whether coerced Covid-19 vaccination could conceivably prevent the spread of natural immunity to the virus, which studies have suggested is more robust.

While obviously not 100 percent effective at stopping Covid-19 infections – or hospitalizations and deaths tied to the virus and its attendant comorbidities – vaccines do dramatically decrease the risk of getting the virus (or getting sick/ dying from it). And though there have certainly been some adverse reactions to vaccination, I have seen nothing to suggest the shots are not safe for widespread use.

Accordingly, I support vaccination. I have had both of my shots, and I have encouraged my readers to get theirs as well. Oh, and I have had Covid-19 at least once (probably twice).

Having said that, I have also adamantly insisted that vaccination is a personal choice … despite ongoing efforts by some to turn it into a diktat.

Furthermore, I have stated that “I do not believe anyone one should lose their job because they decline to be vaccinated … and more importantly, I do not believe anyone should lose their job because government has decided to impose yet another round of draconian societal shutdowns in an effort to contain the spread of the virus.”

Yet here we are …

“The American Dream has turned into a nightmare under president Biden and the radical Democrats,” McMaster tweeted late Thursday. “They have declared war against capitalism, thumbed their noses at the Constitution, and empowered our enemies abroad. Rest assured, we will fight them to the gates of hell to protect the liberty and livelihood of every South Carolinian.”

War against capitalism? Hmmm … I guess McMaster would know about that (see here and here).

McMaster’s posturing drew headlines, but the real power in South Carolina rests with the legislative branch of government. How did its leaders respond to Biden’s diktat?

According to a letter sent to the House “Republican” caucus on Thursday, S.C. speaker Jay Lucas indicated that the pushback may not be as aggressive as some members would like.

“I have heard from many of you that it is our responsibility to challenge these clearly inappropriate actions,” Lucas wrote in his letter (.pdf). “I agree and I believe the vast majority, if not all, of our caucus agrees.”

Lucas also cautioned his colleagues that addressing Biden’s edict in any emergency session held prior to the regular reconvening of the legislature next January would require a two-thirds vote of both chambers.

Accordingly, “there would be no point to violate our own Constitution in an attempt to correct Washington’s violations of the nation’s Constitution.”

Wait a minute, though … don’t so-called “Republicans” have so-called “supermajorities” in both chambers of the South Carolina legislature?

Almost … for whatever good that has done.

Despite the numbers they enjoy in both legislative bodies, Lucas wrote that lawmakers should rely on McMaster and S.C. attorney general Alan Wilson to “combat these unacceptable mandates.”

Sound familiar? This is exactly what happened in the state battle over mask mandates, another issue the legislature declined to definitively address.

“These efforts will likely involve the courts and an exercise of full executive authority at the state level,” Lucas added.

Translation? The legislature is punting on challenging Biden’s mandates … at least for now.

So … what will Wilson do? Sources close to the attorney general told me early Friday he was “huddling” with several of his colleagues from other states in the hopes of formulating a coordinated response to the Washington power grab.

“A review of the order and of the contemplated OSHA rule is already underway,” one source informed me, saying Wilson prefers to “measure twice and cut once” when it comes to weighing in on high-profile legal matters.

Stay tuned … I look forward to keeping readers apprised as to the Palmetto State’s response to these aggressive moves by the Biden administration.