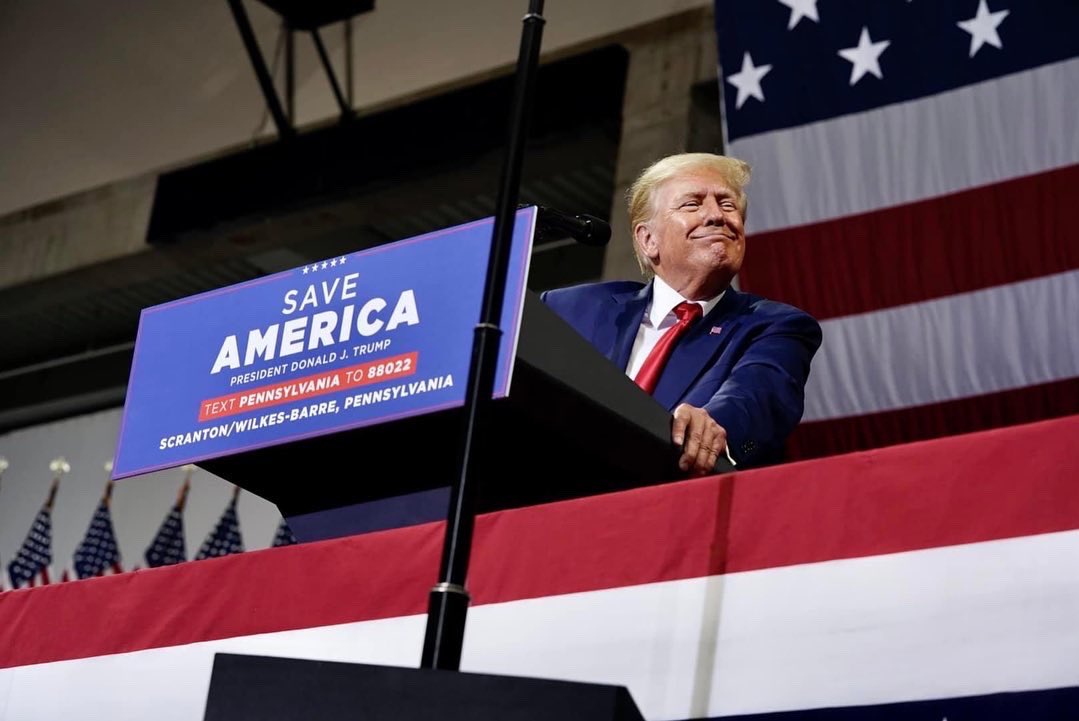 I was always able to look the other way when it came to President Trump’s boorish behavior, because he blew into the D.C. Swamp and wrecked the good ol’ boy system in a way unseen since Teddy Roosevelt gutted the Robber Barons. He focused on his job despite illegal and unfounded schemes by the DOJ/ FBI, and treasonous actions by the Joint Chiefs … and managed to achieve exactly what voters hired him to do.

That included disassembling the trade deals that put American businesses at a disadvantage, bringing jobs and industry back to America, reducing illegal immigration, tax cuts for the middle class, exiting from the toothless Paris Climate Accords that exempt China and India, forcing NATO to pay for a microscopic share of the defense the U.S. provides, achieving energy independence from the rest of the world, offering hope to the forgotten families in the flyover states, and refusing to bow to filth like the King of Saudi Arabia.

I must confess as well that I spend hundreds of hours belly-laughing at many of the boorish comments he said, which put the leftist media in spasms of rage:

“The beauty of me is that I’m very rich.”

“I think the only difference between me and the other candidates is that I’m more honest and my women are more beautiful.”

“The system is rigged. I know, because I’ve used the system.”

In 2020, after Joe Biden miraculously received 10 million more votes than the most popular Democrat President in history, the future of the nation fell to the people who write Joe Biden’s note cards.  In two short years, all of President Trump’s accomplishments and policies were unraveled, and replaced with soaring gas prices, inflation, crime, unchecked immigration, unemployment, and crushing debt for middle-class families.

These issues would surely be the things that are on the minds of the voters in the lower and middle class.

Or so we thought. Instead, the midterm elections rolled out like this:

Republicans: Vote Red! We’ll enact policies like Trump used, and you saw first-hand how well they worked! We’ll get the country back on track!

Republicans: But, but, but… what about gas prices, inflation, crime, immigration, unemployment, and the debt that’s crushing your family’s future?

Democrats: Hmm… not that big a deal.

Republicans: The only people who don’t care about that stuff are rich people, because they can afford to spend their days whining about Trans rights! Today, you’re barely getting by! Why won’t you break ranks?

Democrats: It’s comfy here. Plus, I get my news from The View. Thanks, anyway.

In fact, half of America voted decidedly against their best personal interests, and made clear their priorities are focused on social justice—bolstered by a fear that people who support the Orange Man have swastikas tattooed on their arms, and plan to give away their personal freedoms away in exchange for rule by a fascist, orange strongman. (Why all those people own tens of millions of guns in order to avoid being ruled by a strongman remains a mystery).

After the 2020 elections, the Orange Man did not go gently into that good night. He’s remained on the periphery, barking and remaining in the news whenever he could. Most voters who supported Trump generally hoped he’d slip away into a hot tub with Melania, work on his golf game, and put 100 percent of his efforts into supporting and advising a successor. Why? An uneasy feeling he’s too divisive to win back the White House.

The math is precarious: Never-Trumpers + Republicans who believe the media’s Jan 6th narrative + older Boomers who found/ find Trump’s behavior to be un-Presidential … well, that’s a lot of votes to lose coming out of the gate. It’s also important to remember politicians and bureaucrats on both sides of the aisle are thrilled Trump is gone — they’ve been able to slide right back into the Swamp’s natural state of corruption, waste, fraud, and abuse.

The Red Trickle was, of course, shocking news for the GOP. The message, “We can fix things” didn’t resonate. Given the state of the nation, the only explanation can be fear of the Orange Man. Why else would the Democrats elect a stroke-victim with a so-so prognosis for full recovery?

Trump could’ve stepped forward and cheerleaded the party he unofficially leads. He could’ve announced he was going to work with those in the GOP to better communicate why the policies he implemented worked so well.

He attacked GOP rising stars Ron DeSantis and Glenn Youngkin in the most inane and childish ways possible. He insulted them, and claimed he “made” them. He tweeted Gov Youngkin’s name “sounds Chinese,” and that “he couldn’t have won without me.” He called Gov DeSantis “Ron DeSanctimonious,” days before the election, and after the election bragged he received more Florida votes than “Ron D.”

What is the point? What on earth could this achieve?

Then, in a move shocking to both his supporters and detractors, he said of Gov DeSantis’ potential run for the White House in 2024, ““I don’t know if he is running. I think if he runs, he could hurt himself very badly. I really believe he could hurt himself badly. I would tell you things about him that won’t be very flattering — I know more about him than anybody — other than, perhaps, his wife.”

The former President shot himself in the foot with a .50 rifle. Perhaps it was his time out of the limelight, or jealousy about the popularity of these two governors, but his comments made him look small … and for no logical reason.

Gov DeSantis hasn’t even mentioned running. Trump hasn’t announced. And yet Trump attacked DeSantis in a salacious manner, leading voters to think, “Hmm … what dirt does he have on DeSantis?”

There are two probable scenarios now.

1. DeSantis runs against Trump. Unfortunately, Trump would go after this future superstar the way he went after “Little Marco,” Lying Ted,” and “Low-energy Jeb.” He would do everything possible to destroy him and his reputation in order to win another term. The scorched earth attacks would wound DeSantis … probably badly.

Ergo, we’d have a wounded DeSantis candidate for President, or Trump as the candidate. The midterms seem to indicate Americans are willing to live with things the way they are, so either man winning would be hard. And no matter what, the GOP’s future leader DeSantis would have to go forward in his career carrying whatever wounds Trump inflicted.

2. Trump runs unopposed — but it doesn’t seem possible he can win back the all of those who supported him in 2017. Yes, we need him back to fix the problems the Democrats have caused… but it seems the Dem voters aren’t bothered by the current problems… and the number of Republicans who are “sick of Trump” would likely stay home.

Regardless who the GOP puts up, there is another factor that must be considered: The iron-fisted control of “the narrative” by MSNBC, CNN, ABC, CBS, NBC, NPR, and virtually all the major newspapers. The “America sucks” message will be driven home via a 24-hour news cycle for the next two years; obviously that messaging worked during the midterms—and there’s no logical reason it won’t work again. We just tried, and it should’ve been a slam dunk. But we failed.

Blue America has completely different priorities than Red America, and those priorities don’t include an analysis of effective policy. They support policies they “feel” are important, not policies that better the national economy, security, and energy situation. This is especially frustrating as all of Trump’s accomplishments can be viewed in writing and analyzed using logic, history, and math.

Those realities just don’t seem to matter to half of America.


Unless Trump steps back and decides to be a cheerleading king-maker, there is no way around a grim future. It will be at least six more years until Republicans have even a shot at the White House—but probably ten. By then the national mess may be unfixable. Trump cleaned up Obama and Bush’s mess, but Biden and the DNC have reversed every advancement he made. Voters had an opportunity for “change” by voting Red in the midterms, and they rejected it.

Another issue in play? The members of Gen Z—the ones with crying rooms and trigger warnings and protesting against free speech on campus? Yeah, those kids are voting now. And until they get mugged or find themselves actually paying taxes, they’re gonna vote Blue.

It’s been said that all politics are local. Your city council, mayor, school board, county council, and state government have a huge impact on your life. No, they can’t fix inflation, gas prices, and nuclear war, but they can reduce unemployment, monitor what teachers are teaching, reduce taxes, and improve infrastructure. That’s where Republicans should focus. Prove that conservative policies work locally, then use that story to bolster runs for Federal office.

If Trump runs, the “backlash voting” might be such that the Democrats will win both Congress and another term in the White House, and likely expand the SCOTUS to where they’ll have a 10 to 5 majority.

I’ve never been able to develop a clear and practical vision for how a conservative youngster can thrive in the America ahead… but I’m not a parent. If you are, you’d better develop the plan that evades me, and teach your children well. Putting your head in the sand doesn’t absolve you from that responsibility.

Guest Column: ‘You Were Wrong, And I Was Wrong!’