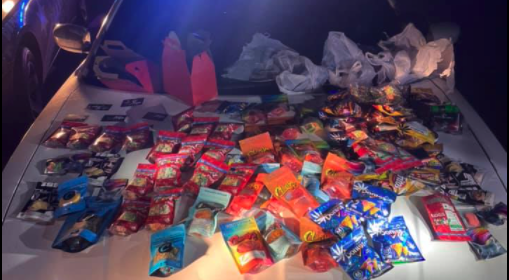 A rural South Carolina sheriff’s office is taking a lot of heat on social media after posting that they arrested a man who allegedly had a large amount of marijuana edibles.

On Tuesday, the officials from the Hampton County Sheriff’s Office posted a press release on Facebook that proudly stated they arrested a 48-year-old man from Rahway, New Jersey and charged him with possession with intent to distribute.

Unlike South Carolina, it is legal to possess and consume marijuana recreationally in New Jersey, by the way.

The New Jersey man was pulled over by Hampton County deputies and Yemassee Police during a safety checkpoint and police claim they smelled marijuana from inside is vehicle.


However, as many commenters pointed out, edibles are typically odorless. It’s possible they smelled marijuana from the car, but it likely wasn’t from the edibles — which makes one wonder if they had probable cause to search the car.

Anyways, the sheriff’s office was proud of this arrest and said so on social media.

“Sheriff T.C. Smalls commended our officers for their professionalism and acute awareness in apprehending Johnson and preventing these drugs from being in the hands of our children,” the Hampton County Sheriff’s Office said on Facebook. “Good job HCSO and we thank YPD for their assistance.”

However, most commenters on Facebook didn’t think it was a job well done…

“Congratulations on you candy bust, what about go bust some real criminals with some real drugs,” one person commented. “What a waste of time.”

“They need to be more worried about all the meth that has taken over this damn county,” one person said. “Omg he had some bootleg pot snacks, come on, they need to be focusing on the stuff that is actually hurting everyone and the people around here.”

Several people commented about the heroin and meth problems in Hampton County — which is one of the poorest counties in South Carolina.

“So what!? when y’all gonna worry about getting the meth dealers out of Hampton?” another person said. “Our young people are not dying from marijuana or these edibles.”

“There is f*cking fentanyl in Hampton County and they are wasting time on Doobie snacks,” one person said.

A lot of people considered the arrest a waste of taxpayer resources and said it makes South Carolina look bad.

“You’re locking this man up and wasting tax payer money then bragging about it like you accomplished something,” one person wrote. “I know South Carolina is like 500 years behind in progress, but it’s just jarring to see it this boldly displayed. It’s laughable to the rest of the country.”

Though a majority of South Carolina residents support the legalization of marijuana, state lawmakers are still behind the times. South Carolina is one of just a handful of states where marijuana is completely illegal.

At the statehouse, S.C. senator Tom Davis has led the fight to legalize medical marijuana for seven years. His latest bill would legalize marijuana for medical use in a strictly regulated setting.

Earlier this month, S.C. Senate majority leader Shane Massey promised Davis that the bill would get a vote by 2022, FITSNews founding editor Will Folks reported earlier this month.

FITSNews supports the legalization of marijuana with some limitations.

“Still, we believe decriminalization makes sense from an economic standpoint – including alleviating unnecessary burdens on law enforcement agencies, our court system and our network of prisons.,” Folks wrote. “Not to mention the burden on taxpayers responsible for subsidizing those core functions of government.”

We have recently reported on several cases that show South Carolina marijuana laws’ impact on the justice system.

In October, we reported on a 49-year-old South Carolina man who was sentenced to 10 years in prison after pleading guilty to possessing less than 2 ounces of weed.