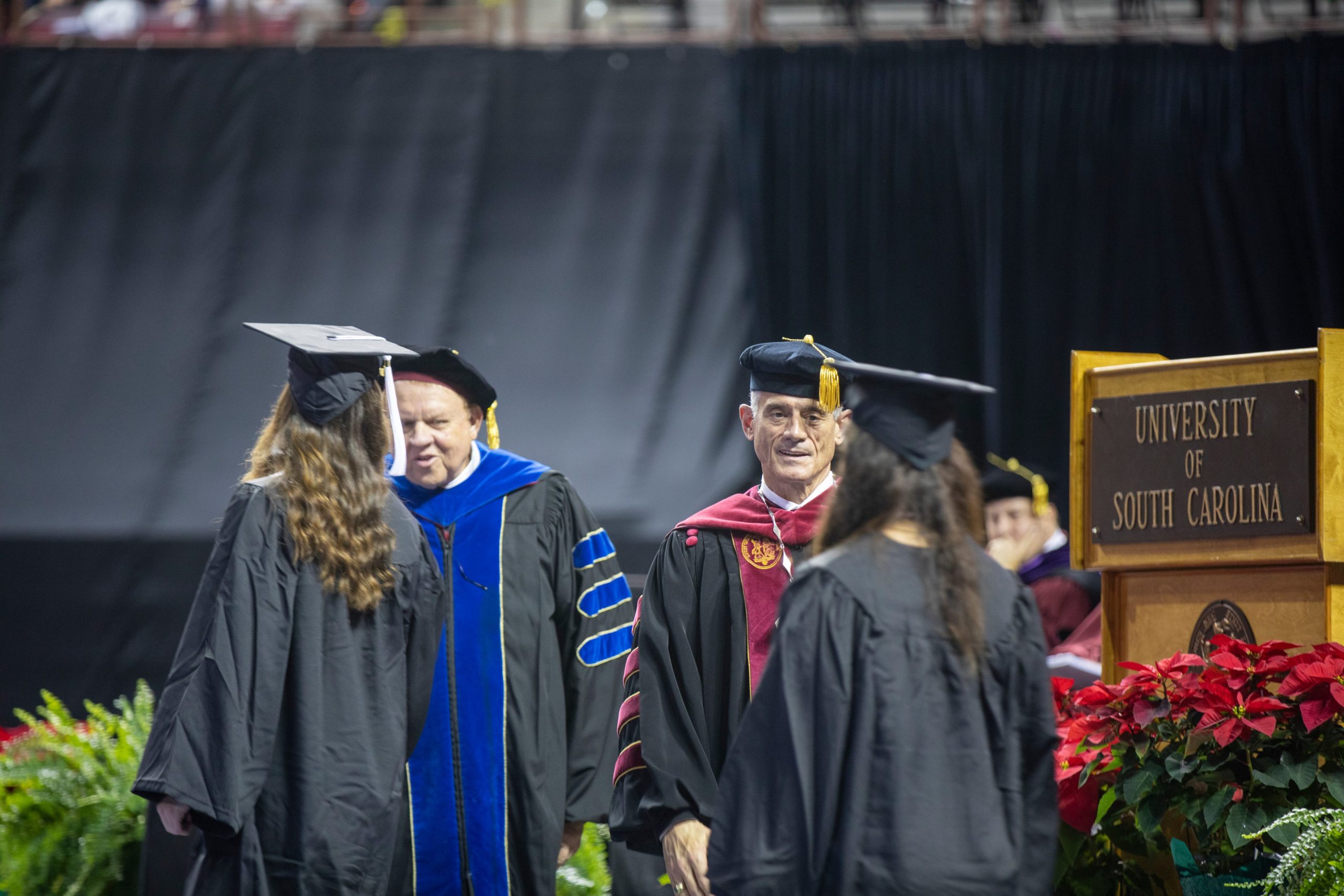 During his address to graduates, Caslen slurred his words, couldn’t remember the name of his own university (mistaking it for the far more prestigious University of California) and appeared to mock the pastor who delivered the ceremony’s invocation.

How bad did it get? Click here to read my report … or, just type “Caslen” into your favorite social media search box.

What you will see is equal parts amusing, cringeworthy and embarrassing …

The scorn and derision which Caslen – a retired U.S. Army general and the former superintendent at West Point – has been receiving in the aftermath of his commencement appearance is downright brutal (and from where I sit, well-deserved). However, so far Caslen seems to have been given a hall pass by mainstream media outlets in the Palmetto State. After ignoring his commencement meltdown (prior to my reporting, anyway), these outlets have since decided to pass the incident off as nothing more than a humorous gaffe.

I suspect they will have a much tougher time covering for Caslen in the aftermath of this report, however …

Why? Because in addition to the slurring, misnaming and mocking, Caslen appears to have plagiarized the closing lines from a commencement address delivered on May 17, 2014 at the University of Texas by retired U.S. Navy four-star admiral (and future Texas chancellor) William H. McRaven.


I was alerted to this alleged plagiarism by a source who submitted the information via our contact page. According to the source, Caslen “ripped off” McRaven’s speech “almost verbatim.”

“There was no attribution for an almost verbatim lifting of McRaven’s remarks,” the source alleged. “Disgraceful.”

Let’s take a look at the tape, shall we?

First, here is a video clip of Caslen delivering the closing lines of his address to graduates …

And here is a transcript of his remarks …

Know that life is not fair and if you’re like me you’ll fail often. But if you take some risks, step up when times are toughest, face down the cowardly bullies and lift up the downtrodden and never, never give up – if you do those things, the next generation and the generations to follow will live in a world far better than the one we have today.

And what started here – today – will indeed change the world for the better.

Dispensing with the fact that this is little more than feel-good pablum, let us now turn to a video clip of admiral McRaven delivering his 2014 speech in Austin, Texas.

And here is the transcript of the excerpt from his address …

Know that life is not fair and that you will fail often. But if take you take some risks, step up when the times are the toughest, face down the bullies, lift up the downtrodden and never, ever give up – if you do these things, the next generation and the generations that follow will live in a world far better than the one we have today.

And what started here will indeed have changed the world – for the better.

Caslen clearly changed a few words from McRaven’s remarks, but the majority of the excerpt is quoted verbatim (right down to the cadence and the timing). Of course for some reason (ahem) Caslen’s energy level is way off …

For good measure, here is a “mash-up” of the two speeches comparing their similarities …

This news outlet has confirmed that Caslen did not attribute McRaven in his speech, nor was there any written attribution included in the program for the event.

McRaven’s speech has been plagiarized before. According to the website Plagiarism Today, a high school principal from Connecticut named Glenn Lungarini “plagiarized portions of his graduation speech from a similar one given by U.S. admiral William H. McRaven at the University of Texas in 2014.”

Lungarini was suspended for eight days without pay as a result of the incident, which he told the Republican American was due to an excerpt provided to him being “improperly sourced.”

“I was unaware that the words I spoke were those of someone else,” Lungarini told the paper. “They were provided to me by an outside source and I gravitated toward a strong message, but failed to check the source. By not doing so I committed plagiarism.”

Also of interest? McRaven’s speech is included in an April 2020 article in Teen Vogue which lists the “16 Best Gradation Speeches That Leave A Lasting Impression.”

Curiously, this Teen Vogue article is the first link that appears on a Google search for “best commencement speeches.”


Honestly? It would not surprise me at all if a Freedom of Information Act (FOIA) request to the University of South Carolina president’s office seeking internet history data were to turn up a copy of this particular article on someone’s state-issued computer, laptop, tablet or smart phone. I would further wager there might be some Google searches for “best commencement speeches” among that internet search data, too.

Messages for a university spokesman seeking comment on Caslen’s alleged plagiarism were not immediately returned. If a response is received, I will update this story. Certainly, my news outlet has an open microphone policy and will be more than happy to extend the floor to Caslen or anyone wishing to speak on his behalf.

Doubtless I will have plenty of editorial thoughts to share in future posts. Until then, I will simply say that if it is conclusively determined Caslen committed plagiarism then he should face the same punishment as any other university student, professor or employee determined to be guilty of the same offense.

According to the university’s honor code (.pdf), it is a violation to commit “an act of cheating, complicity, falsification, or plagiarism.” Plagiarism is defined by the code as the “use of work or ideas without proper acknowledgment of source” including “paraphrasing without acknowledgment of the source.”

As I have noted often, I am no fan of Caslen. I believe his administration has been an unmitigated disaster – continuing the school’s stagnant academics, backsliding athletics, liberal indoctrination and all manner of taxpayer-funded speculation. Obviously all of these things were taking place at South Carolina before Caslen became president … but he has done absolutely nothing to right the ship.

That is certainly not what was expected after “Republican” governor Henry McMaster led the charge to appoint Caslen two years ago over the objections of a badly divided board of trustees.

Caslen also recently enraged billionaire businesswoman Darla Moore – the namesake of the business school and the university’s largest donor – after his administration failed to acknowledge the passing of her mother last month.

“I continue to be embarrassed and humiliated by my association with you and all you so disgracefully and incompetently display to the community you are charged to serve and to whom you look for support,” Moore wrote in a letter to school officials.

South Carolina Democrats Have A Leadership Fight, Too