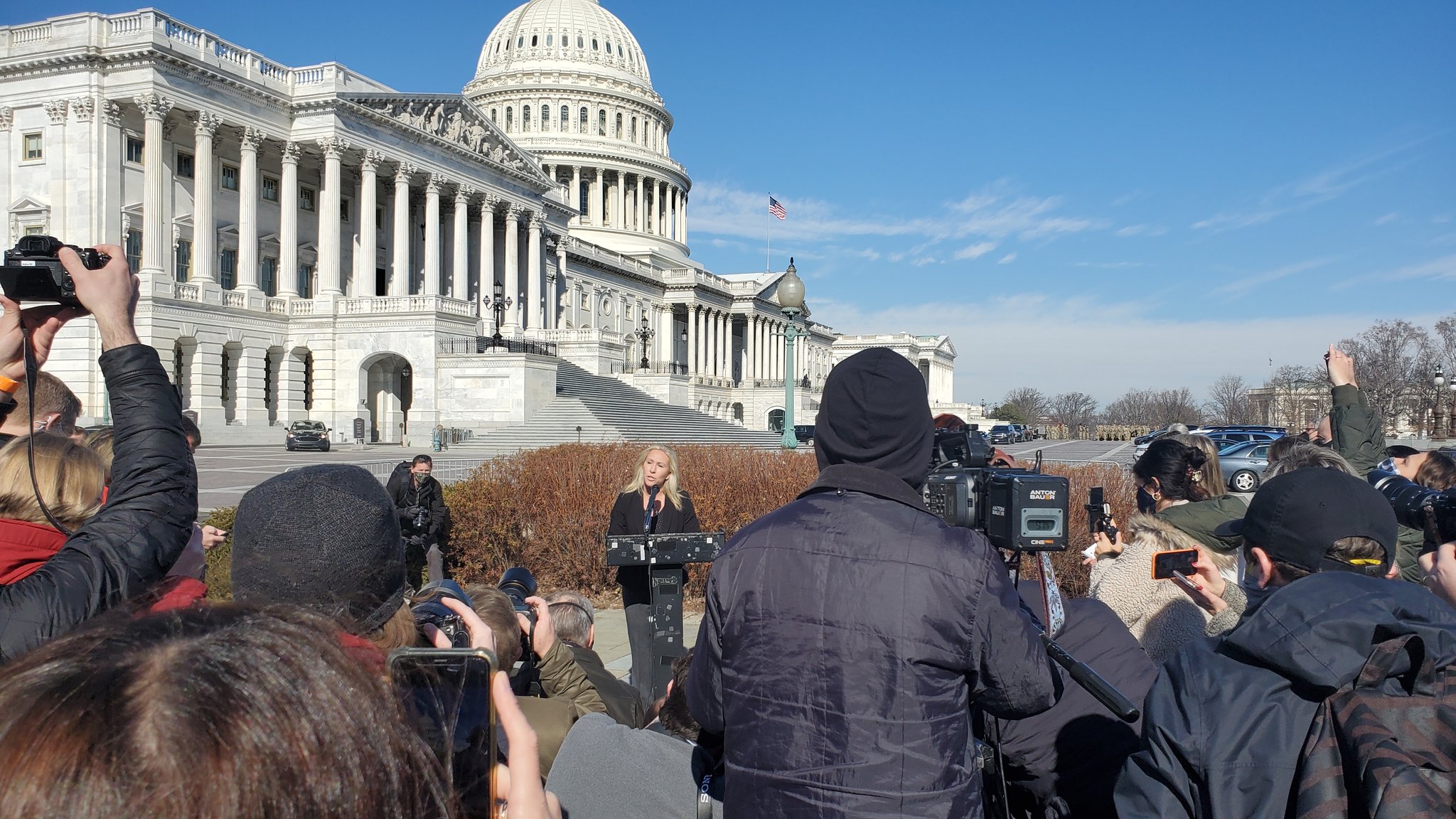 The face of Trumpism in the United States Congress was hit with affair allegations this week – but did the splashing of such tawdriness across newspaper headlines around the globe say more about her? Or more about her accusers?

Or … perhaps both deserve to be called out in this case?

Before diving into the details of the allegations against U.S. congresswoman Marjorie Taylor Greene, some context is required. Elected last November, Greene is an ultra-far right conservative who has embraced some decidedly off-the-wall theories in the past (including the not-too-distant past).

For example, she has previously claimed the 2018 school shooting in Parkland, Florida was a “false flag” the 2017 Las Vegas massacre was “staged” by the federal government in an effort to advance gun control measures.

In promoting these views, Greene has been tied to QAnon – a shadowy group that has sought to counter increasingly leftist mainstream media coverage by peddling similarly untrustworthy right-wing conspiracy theories.

Since being elected, Greene has taken steps to distance herself from the “Q” – but her colleagues in the U.S. House stripped her of her committee assignments last week on the basis of this affiliation.

Basically, the goal is to take legitimate allegations of deep state machinations against Trump and conflate them into unproven conspiracy theories about child sex rings, cannibalism and devil worship.

While we do not subscribe to QAnon, we certainly understand why it has taken hold in some circles. After all, when the mainstream media lies, invokes crass and hypocritical double standards and overtly propagandizes in favor of one ideology at the expense of another – is it any wonder conspiracy theories take root?

And when established social media platforms invoke the same double standards in censoring news – and newsmakers – is it any wonder people seek truth elsewhere?

Make no mistake: Those who foment falsehoods on the right wing are every bit as contemptible as those who do it on the left. Knowingly misleading people is wrong no matter your objective … and those who deliberately deceive should be held accountable for it.

How? By the marketplace of ideas …

“The ultimate good desired is better reached by free trade in ideas – that the best test of truth is the power of the thought to get itself accepted in the competition of the market,” legendary U.S. supreme court justice Oliver Wendell Holmes Jr. wrote in his famous dissent from the 1919 supreme court case Abrams v. United States (250 U.S. 616).

In other words, rather than censoring untruths we allow them to be held up for fuller inspection … to be credited or discredited based on their merits or demerits.

Anyway, back to Greene …

According to The Daily Mail, the 46-year-old congresswoman “cheated on her husband with a polyamorous tantric sex guru … (t)hen after ending her affair with him, the mom-of-three moved on to a gym manager behind her husband’s back.”

The Mail goes on to allege that Greene – a weightlifting enthusiast – “was brazen about her affairs which she carried on a decade ago while working in gyms in Alpharetta, Georgia, some 35 miles north of Atlanta.”

“It wasn’t a secret,” one source told the paper. “Everyone who moved in her circles knew about both the affairs.”

Another claimed Greene “was quite open about it.”

Does anyone care? Probably not. However, Greene is a “family values” social conservative – a self-described “strong conservative Christian” – meaning she does fit one of our criteria for reporting on allegations of infidelity (i.e. the hypocrisy angle).

Still, as one of our favorite paleo-conservative sources told us, the time when such stories evoked widespread shock or outrage has clearly passed.

“I think it’s safe to assume 98.7 percent of politicos do stuff like that or worse,” she said. “Also, the threshold for what is considered ‘scandal’ is almost nonexistent now.  Yawn.”

Indeed … but will social conservative voters in Greene’s district feel the same way?

The bigger story from our vantage point is the organized takedown of Greene – who has become a widely followed envelope pusher in Washington, D.C. First, she gets stripped of her committee roles. Then, she gets hit with a salacious extramarital affair story taking direct aim at one of her core constituencies in Georgia.

The branding themes underlying this one-two punch combination are clear: Greene is a kook who has been repudiated by her colleagues as well as a two-faced, sanctimonious moralizer.

Which is the real objective of all this …


Certainly Greene’s over-the-top response to the allegations didn’t help her when it comes to credibility. She referred to the Daily Mail piece as “ridiculous tabloid garbage spread by an avowed Communist,” as well as “another attempt to smear my name because I’m the biggest threat to the Democrats’ socialist agenda.”

Perhaps that is true, but saying so just comes off sounding … unhinged.

Meanwhile, Greene’s attorney Lin Wood has referred to prior affair allegations – including those contained in this expansive piece in The New Yorker – as “false accusations, half-truths, misrepresentations, out-of-context statements, and agenda-driven lies.”

Whatever the truth may be about her alleged affairs, one thing is clear: Greene has captured the attention of the “cancel machine” – which obviously believes she can be used to delegitimize a host of Trump-era policies and shift the GOP electorate further to the ideological “center.”