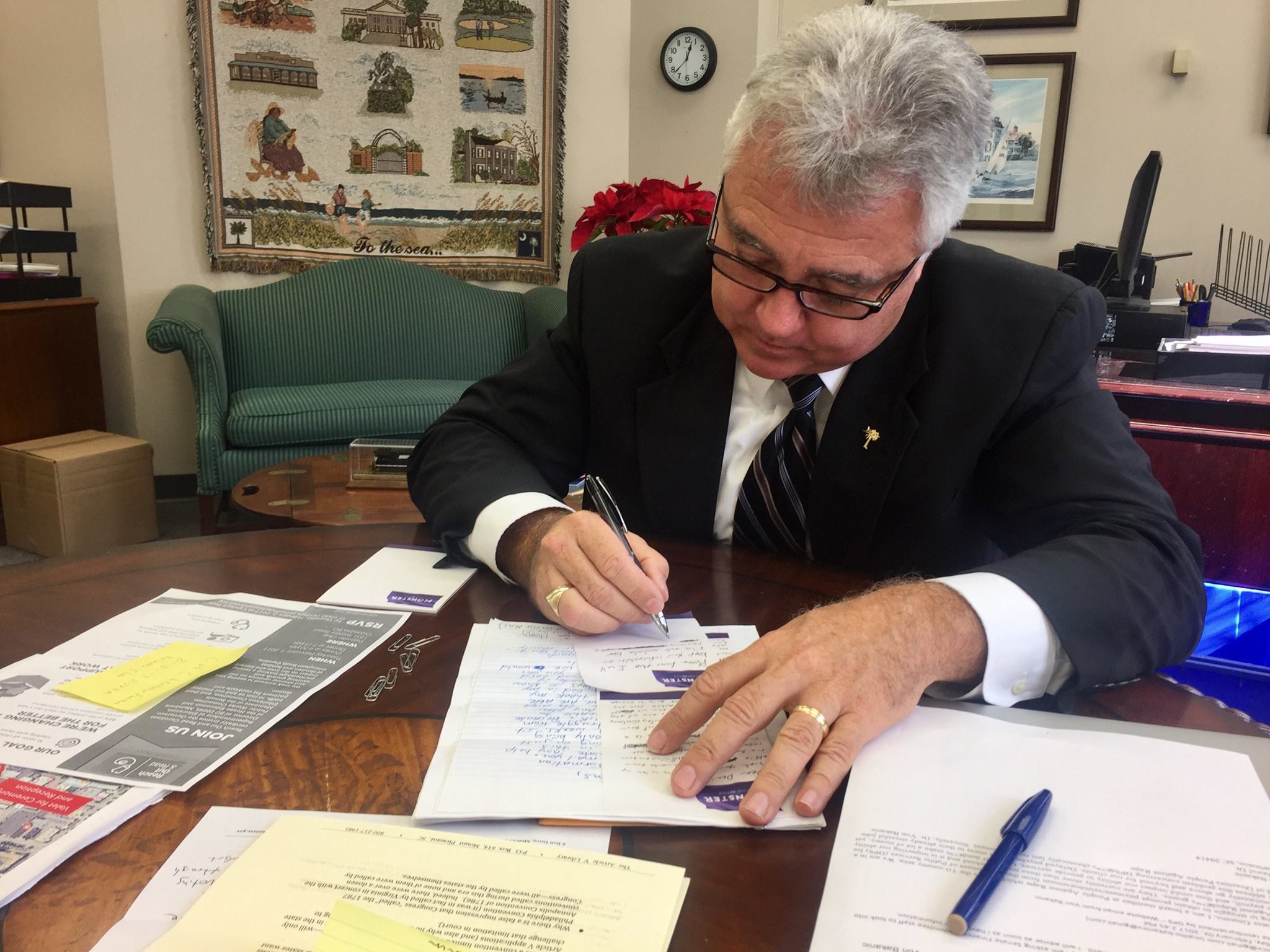 Whitaker is poised to give Grooms a credible, well-funded challenge in S.C. Senate District 37 (map) – a seat the career politician has represented since 1997. In fact, she is one of several up-and-coming Democratic candidates looking to knock off Republican incumbents in the Palmetto Lowcountry – a region of the state which is experiencing a rapid and pronounced demographic shift.

Besides Grooms, state senators Chip Campsen and Sandy Senn are also viewed as exceedingly vulnerable heading into next year’s elections – as are multiple GOP members of the S.C. House of Representatives in and around Charleston county.

But Grooms’ race could wind up becoming the one to watch … especially if the rumors we are hearing about a possible third-party challenger come to fruition.

First, though, a look at his Democratic opponent: Whitaker is a graduate of Clemson University. She and her husband have two school-age children. Both of them are active in their community and church – Seacoast – where they lead a class for young married couples.

“Straight out of central casting,” we opined upon Whitaker’s entry into the race.

Whitaker says she is running because citizens of Grooms’ district need to see “real change in economic uplift, education, infrastructure and health care.”

We concur … and as previously stated “we don’t even care that she is a Democrat.”

“Give us an honest liberal over a fake conservative any day of the week,” we wrote back in April. “And twice on Sunday.”

(Via: Kathryn Whitaker for SC Senate)

Whitaker (above) recently took the fight directly to her rival, receiving an invitation to tour the S.C. Ports Authority (SCPA) – an agency Grooms likes to think of as his own personal fiefdom.

We are told the veteran lawmaker was “infuriated” over what he perceived as a sleight.

So … can Whitaker upset Grooms?

U.S. president Donald Trump carried this district with 58 percent of the vote in 2016, but as the 2018 election cycle capably demonstrated – things are changing south of Interstate 95. Also, Grooms’ sanctimonious pandering on social issues – and his emergence as an arch-defender of the SCGOP’s failed tax-and-spend status quo – make him uniquely vulnerable to a specific kind of third-party challenger.

“Behind Grooms’ flag waving Tea Party act and beneath the veneer of his crocodile tear Christianity lies a consummate insider – an apologist-in-chief for some of the most spectacularly failed government institutions in the Palmetto State,” we wrote recently.

Among these institutions? Santee Cooper, the debt-addled government-run utility that plunged the Palmetto State headfirst into NukeGate – a botched nuclear construction project that cost taxpayers and ratepayers billions of dollars. Grooms isn’t just a Santee Cooper supporter, though, he represents the roadblock in the S.C. Senate when it comes to lawmakers unloading this toxic asset, something they should have done decades ago (before it racked up billions in red ink).

Given his over-the-top social “conservatism” and his blatant big government leanings, Grooms is alienating two broad swaths of the GOP electorate – although thus far no one has emerged to exploit these fissures in either a primary or general election setting.

Is such a candidate out there, though? Yes …

According to our sources, former libertarian gubernatorial candidate Steve French is reportedly considering running for Grooms’ seat in the 2020 general election – and pumping considerable resources into his contemplated bid.

A successful small businessman, French – like Whitaker – has a gorgeous family, compelling personal narrative and is an adept messenger. More troubling for Grooms, the fiscal conservative/ social moderate is uniquely positioned ideologically to wreak havoc within Grooms’ GOP base in a general election.

“There are a lot of Mark Sanford-style voters down here who do not like Larry Grooms or Larry Grooms-style Republicans,” one longtime Lowcountry political strategist told us recently. “I could see (French) or someone like him picking up some support from those Sanford-style voters – if he is able to convince them he is a real alternative and more than (just) a protest vote.”

According to our sources, French (above) is “seriously considering” a bid for this seat, although we are told he is not going to run a Quixotic bid or aspire to spoiler status (i.e. running for the purpose of electing a Democrat to the seat).

We reached out to the dashing libertarian candidate earlier this week hoping to get his thoughts on the rumors, but he declined to say whether he would challenge Grooms. French did tell us he “was definitely not done with trying to make South Carolina more free and more prosperous” and that he would “look at any opportunities that fit with that goal.”

Our view? A French candidacy – especially one into which he was willing to plow substantial resources – could be extremely viable in this demographically evolving district.

Also worth considering? Grooms’ stalwart opposition to the sale of Santee Cooper makes his reelection campaign the perfect target for well-financed independent expenditure attacks – mailings, radio ads, television spots, internet campaigns and other materials designed to drive up his negatives or, alternatively, prop up one (or both) of his general election opponents.

Grooms has plenty of money in his campaign account (more than $270,000 on hand, as of October 10), but while that sum is formidable under normal circumstances – it is chump change to a coalition of well-funded interest looking to exploit the glaringly obvious vulnerabilities Grooms is facing.

Never forget it was a well-funded independent expenditure ad that vaulted then-state representative Nikki Haley into contention in the 2010 governor’s race, setting the stage for her election and eventual ascendency onto the national stage.

Bottom line? If French jumps in – and if special interest money comes to play against Grooms – this could be the legislative race to watch in 2020.