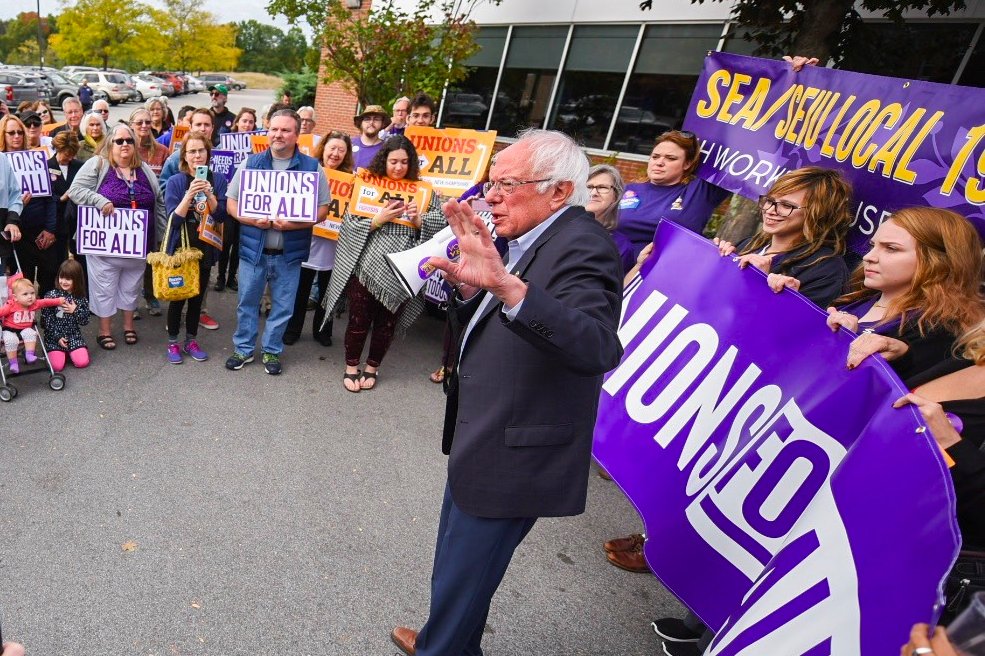 At a pivotal moment in his flagging candidacy, U.S. senator Bernie Sanders of Vermont left the 2020 campaign trail this week with chest pain – requiring hospitalization as well as treatment for a blockage in an artery around his heart.

“During a campaign event yesterday evening, Senator Sanders experienced some chest discomfort,” a statement from Sanders’ advisor Jeff Weaver noted. “Following medical evaluation and testing he was found to have a blockage in one artery and two stents were successfully inserted. Senator Sanders is conversing and in good spirits. He will be resting up over the next few days. We are canceling his events and appearances until further notice, and we will continue to provide appropriate updates.”

Sanders, 78, is making his second bid for the White House. In 2016, the self-styled “independent socialist” put up a much stronger than expected challenge to eventual Democratic presidential nominee Hillary Clinton.

In fact, Sanders basically had the nomination stolen from him.

Sanders was hospitalized in Las Vegas, Nevada, where he and multiple other Democratic candidates were scheduled to attend a gun control forum set to coincide with the second anniversary of the 2017 shooting there that left 58 people dead and hundreds more wounded.

“I hope to see my friend back on the campaign trail very soon,” U.S. senator Elizabeth Warren tweeted.

Warren recently edged ahead of former U.S. vice president Joe Biden in Iowa – and is nipping at Biden’s heels in New Hampshire, a state Sanders won decisively during the 2016 primary.

“Anyone who knows Bernie understands what a force he is,” Biden tweeted. “We are confident that he will have a full and speedy recovery and look forward to seeing him on the trail soon.”

Sanders’ 2020 candidacy simply has not caught fire. Over the last six months, his support in Iowa – a state he came within a quarter-percentage point of winning in 2016 – has been cut in half (from 24.5 percent on April 10 to 12 percent today, per Real Clear Politics).

Meanwhile in New Hampshire, Sanders has fallen behind both Warren and Biden. And in early-voting South Carolina, Sanders support has slipped all the way down to single digits according to the latest polling.

We are not surprised Sanders’ campaign is struggling.

On the occasion of his entry into the race back in December, we predicted that “a field loaded with younger progressive candidates” would eat into his support.

“With so many up-and-coming liberal luminaries looking to throw their hats in the ring in the coming race, Sanders will have a hard time getting younger Democrats to coalesce around his candidacy the way they did in 2016,” we opined.

At the time, we suspected former U.S. congressman Beto O’Rourke of Texas, U.S. senator Kamala Harris of California or U.S. senator Cory Booker of New Jersey would be the candidates eating into Sanders’ liberal base.

Instead it has been Warren, who has run an incredibly disciplined, substantive campaign (well, after her disastrous launch anyway).

Warren’s odds of winning the Democratic nomination jumped exponentially last month when Biden got sucked into the impeachment drama surrounding U.S. president Donald Trump. Now with Sanders forced to depart the campaign, Warren is looking more and more like the Democratic frontrunner.

That is the politics of the matter. On a personal level, despite our near-total ideological incongruity with Sanders we would join his Democratic rivals in wishing him a quick and speedy recovery. We do not wish ill health on anyone.