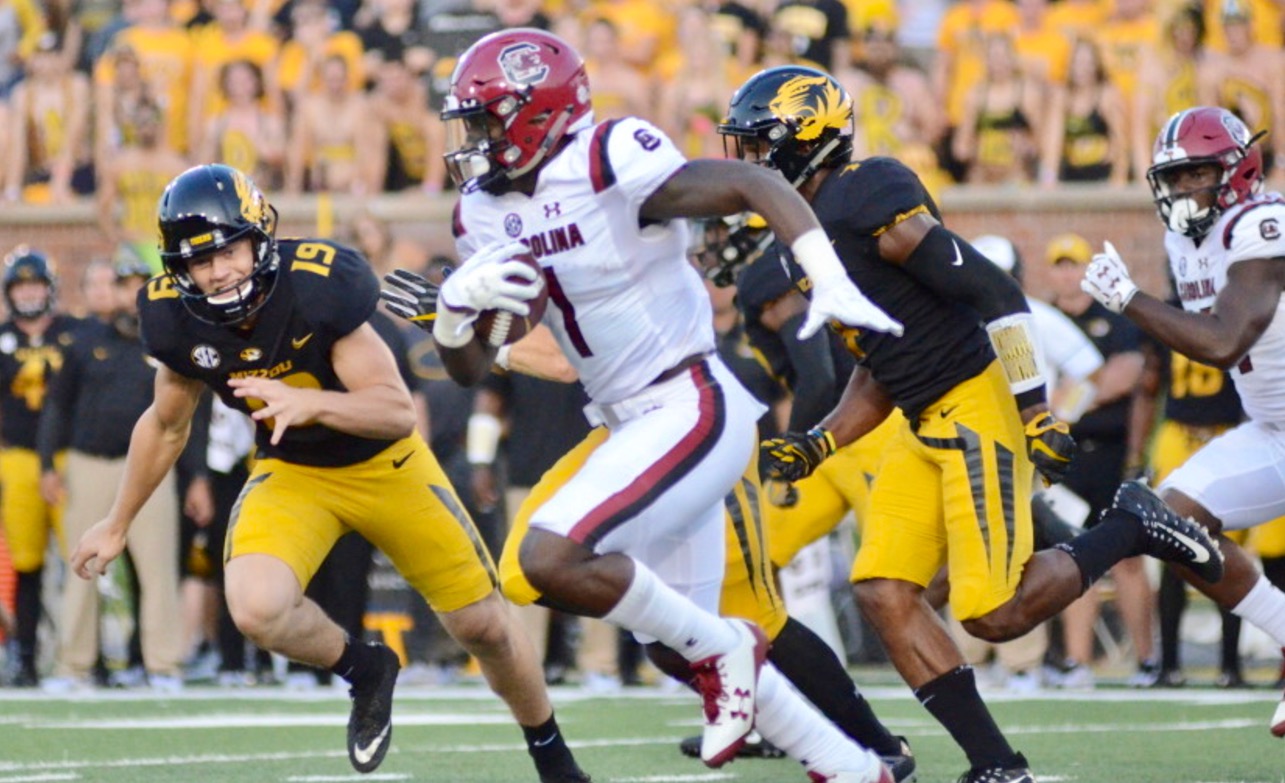 For the second week in a row, junior wide received Deebo Samuel returned a kickoff 97 yards for a touchdown.  Two plays later, he took a handoff 25 yards to pay dirt to give the University of South Carolina Gamecock football team its second touchdown in a fifteen-second span against the Missouri Tigers.

Single-handedly, Samuel turned a 10-point Mizzou cushion into a four-point edge the Gamecocks (2-0, 1-0 SEC) wouldn’t relinquish as they cruised to a 31-13 victory in the Southeastern Conference opener for both squads.

Samuel – a 6-foot-0, 220-pound speedster from Inman, S.C. – also caught five passes for 45 yards.  Through the first two games of the season, he is clearly the breakout star for South Carolina – a team that was picked to finish in fourth place in the SEC East this season.

Can the Gamecocks exceed those expectations?   If teams keep kicking the ball to Samuel, perhaps …

South Carolina sophomore quarterback Jake Bentley turned in another steady performance under center for head coach Will Muschamp – completing 18 of 28 passes for 187 yards with one touchdown and no interceptions.  The 6-foot-3, 220-pound signal caller from Opelika, Alabama is now 6-3 since taking over as the Gamecocks’ quarterback midway through the 2016 season.

Helping Bentley out?  One of his favorite targets from last season, tight end Hayden Hurst.

After catching just one pass for minus-two yards in last week’s nail-biter against NC State, Hurst hauled in three catches for 69 yards against Missouri – including a 39-yard touchdown strike.  He also scored a two-yard touchdown on the ground as co-offensive coordinator Kurt Roper got creative in the second half with the Gamecocks’ goal line offense.

And while South Carolina was out-gained by its opponent for the second straight time this season, its defense did show modest improvement against an up-tempo Missouri offense that put up 815 yards and 73 points against Missouri State last week.

The Gamecocks picked off Tigers’ quarterback Drew Lock twice – including an interception by heralded true freshman defensive back Jamyest Williams that led to South Carolina’s go-ahead touchdown in the first half.

Here is the box score from the game …

South Carolina will take on another SEC East foe next weekend when the University of Kentucky comes to Williams-Brice Stadium for the Gamecocks’ 2017 home opener.   The Wildcats (2-0, 0-0 SEC) are looking for their fourth consecutive victory over South Carolina

This Is Not What We Meant By “Paying Players”