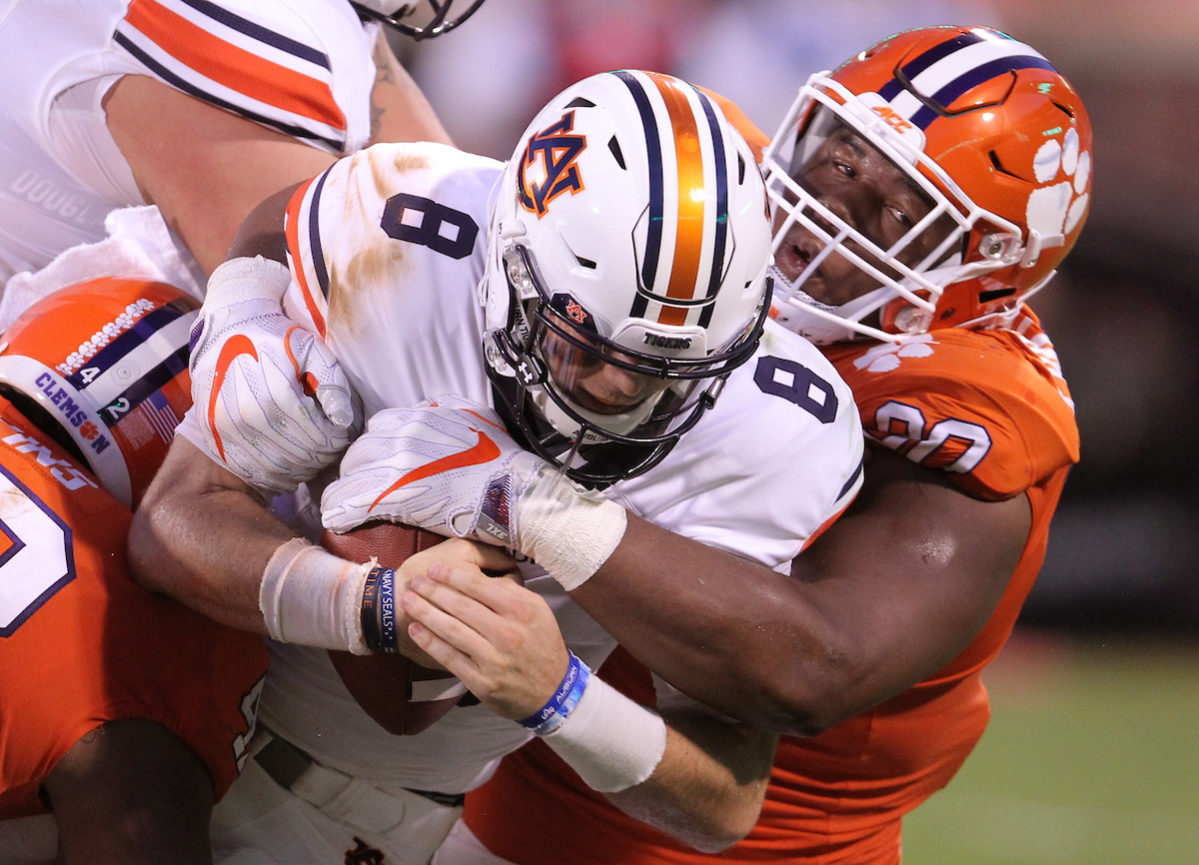 Clemson University’s stultifying defense shut down offensive wizard Gus Malzahn and Auburn on Saturday, holding the No. 13 Tigers to an anemic 117 yards of total offense.

You read that right … the No. 13 team in America actually put up fewer yards against Clemson (2-0, 0-0 ACC) than Kent State did a week ago.

“I feel like I’m back at Alabama in 1988 after that one,” Clemson head coach Dabo Swinney said.  “What a tough, gritty game.”

Led by preseason All-American defensive lineman Christian Wilkins and Dexter Lawrence, Clemson’s defense racked up eleven sacks against the Tigers from the Plains – one short of the school record.  Four of those sacks came courtesy of junior defensive end Austin Bryant (below), who transferred to Tigertown from Baylor this offseason. 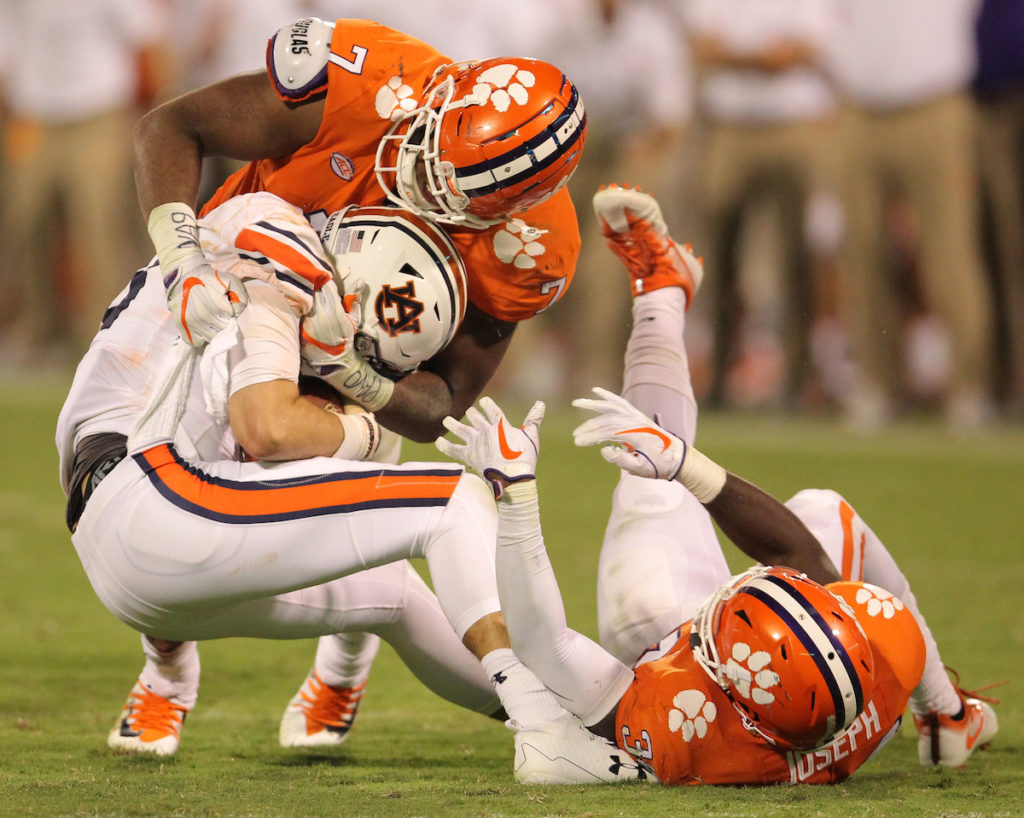 It was yet another signature victory for Swinney’s defending national champions, although once again the credit clearly goes to Clemson’s recruiting wizard/ defensive coordinator, Brent Venables.  The winner of the 2016 Frank Broyles Award as the nation’s top assistant coach continues to prove why he is the best football coach in America, in our humble opinion.

In the second half, Venables’ unit held Auburn (1-1, 0-0 SEC) to drives of two, five, six, minus-five, seventeen and minus-five yards.  That suffocating performance bailed out Clemson’s offense – which lost virtually all of its top skill position players to the NFL after last season’s championship run.

Making his second career start – and first against a ranked opponent – Clemson quarterback Kelly Bryant completed 19 of 29 passes for 181 yard with no touchdowns and no interceptions.  Bryant also ran for 59 yards on 19 carries – scoring the game’s only two touchdowns on the ground. 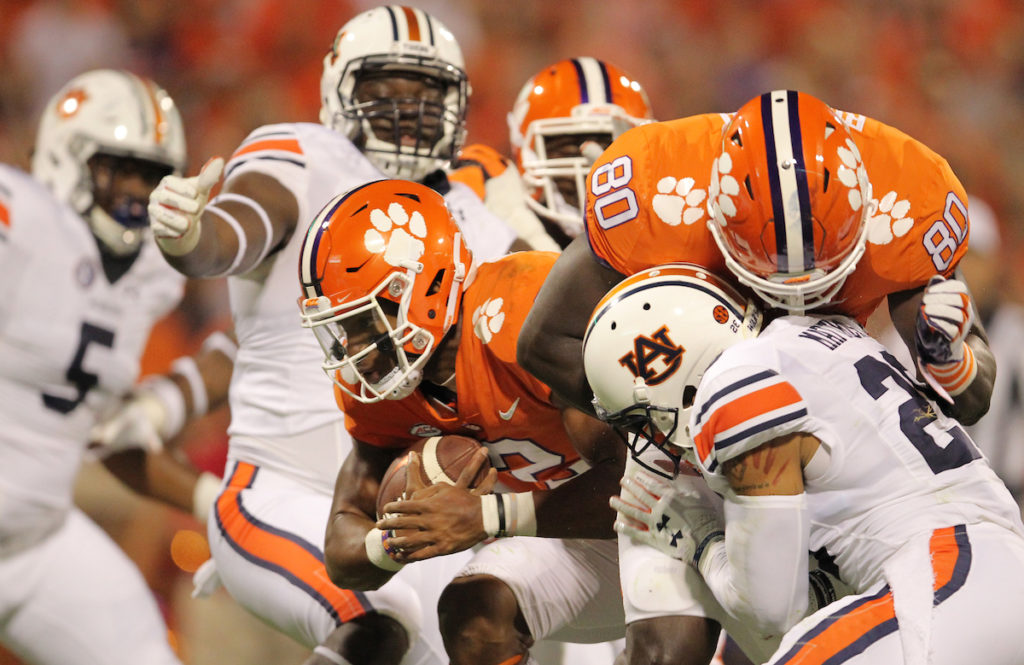 The 6-foot-4, 220-pound junior from Calhoun Falls, S.C. went down hard in the first half after getting hit by Auburn defensive lineman Dontavius Russell.  Bryant had to leave the game as a result of the impact, with backup quarterback Zerrick Cooper forced to take over for several snaps.

“I just had the wind knocked out of me. I was fine,” Bryant said after the game. “I wasn’t going to go out like that.”

On Clemson’s next drive, Bryant drove the Tigers 88 yards in twelve plays – one of which was a gorgeous over-the-shoulder reception by junior wide receiver Ray-Ray McLeod.  That dazzling reception (below) would set up a three-yard touchdown run by Bryant that gave Clemson a 7-6 lead. 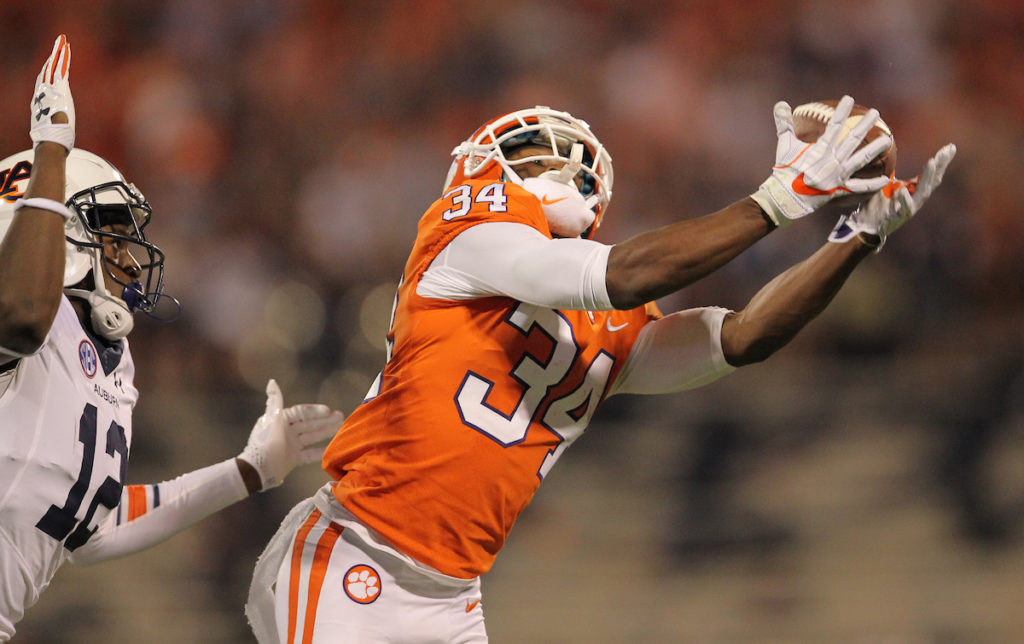 Bryant praised his team’s defensive unit for giving the offense time to find its groove.

“They really found their rhythm in the first quarter when we really couldn’t on offense,” he said.  “I mean Auburn was making good plays, but our defense was making the tough plays, guarding the perimeter and disrupting the pass.”

Here’s the full box score from the game …

Swinney has now won an even dozen games against SEC competition since taking over as Clemson’s coach midway through the 2008 season.

Up next for Clemson?  The Tigers take to the road for the first time this season against defending Heisman Trophy winner Lamar Jackson and the No. 17 Louisville Cardinals (2-0, 1-0 ACC).  Jackson was responsible for 525 total yards of total offense and six touchdowns in his team’s 47-35 victory over conference rival North Carolina.  Through two games, Jackson has already racked up more than 1,000 yards of total offense.

#GamecockFB: Deebo Does It Again