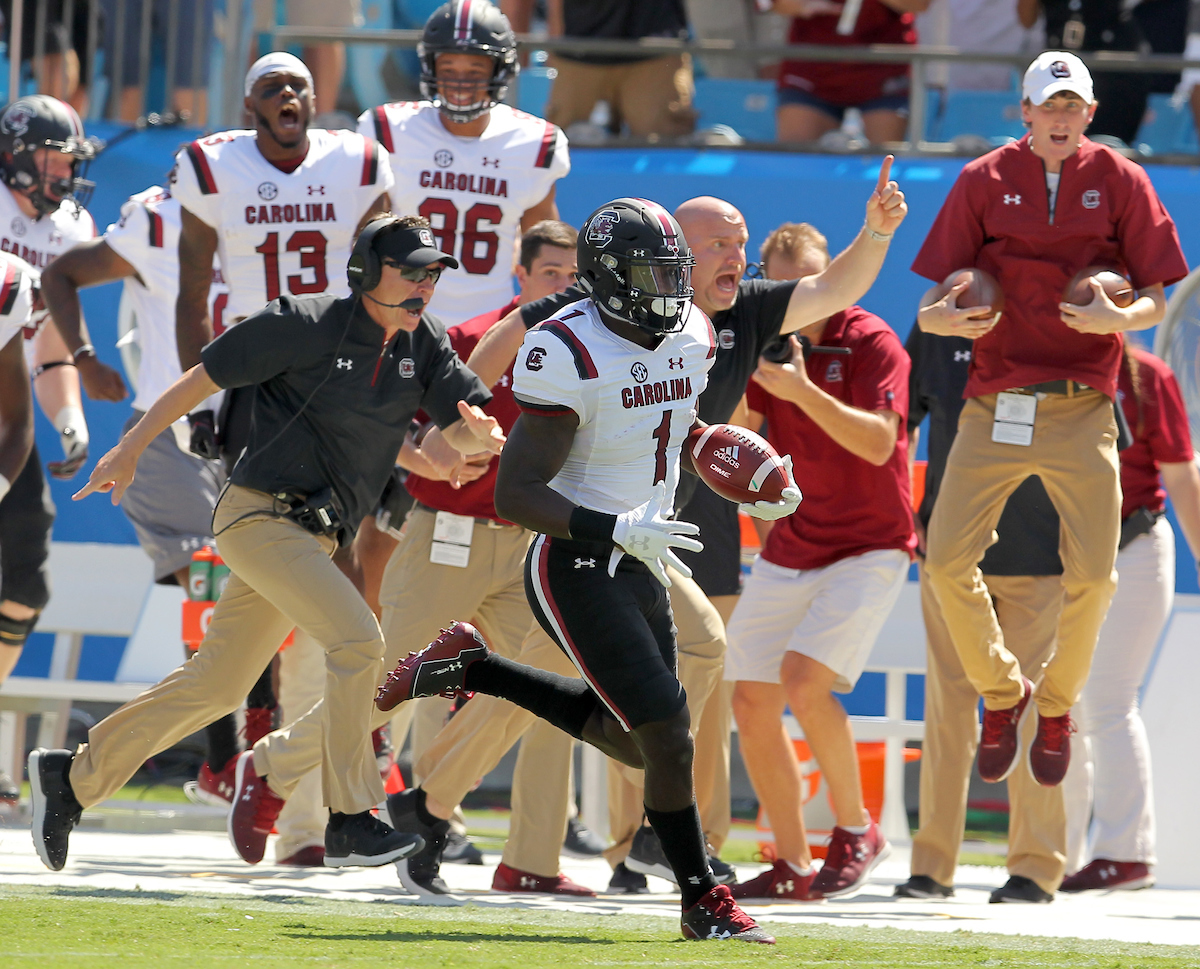 Junior wide receiver Deebo Samuel opened the University of South Carolina football team’s 2017 season with a bang … and his teammates managed to hold on for dear life down the stretch to give the Gamecocks an upset win over NC State, an up-and-coming title contender in a power five conference.

If the Wolfpack is going to win the Atlantic Coast Conference (ACC) championship this year, it is going have to learn how to win close games like this one … something fifth-year head coach Dave Doeren’s team couldn’t do a year ago.

South Carolina fans, on the other hand, have to be thrilled with what they saw from their team’s young nucleus of talented offensive players – led by Samuel and sophomore quarterback Jake Bentley.

Before the national television cameras had shifted from their noontime games (and before most fans had settled into their seats at Bank of America stadium), Samuel took the opening kickoff of the Gamecocks’ 2017 season all the way to the house – slicing through the Wolfpack’s kick coverage and racing down the sideline for a 97-yard touchdown.

That score would wind up being the difference in this nip-and-tuck contest, as second-year head coach Will Muschamp’s Gamecocks (1-0, 0-0 SEC) withstood a late rally from the favored Wolfpack (0-1, 0-0 ACC) for a thrilling 35-28 season-opening win in Charlotte, North Carolina.

In addition to his big kickoff return, Samuel also caught a pair of touchdown passes – including a highlight reel one-handed grab on South Carolina’s opening possession of the second half that put South Carolina ahead 28-21. 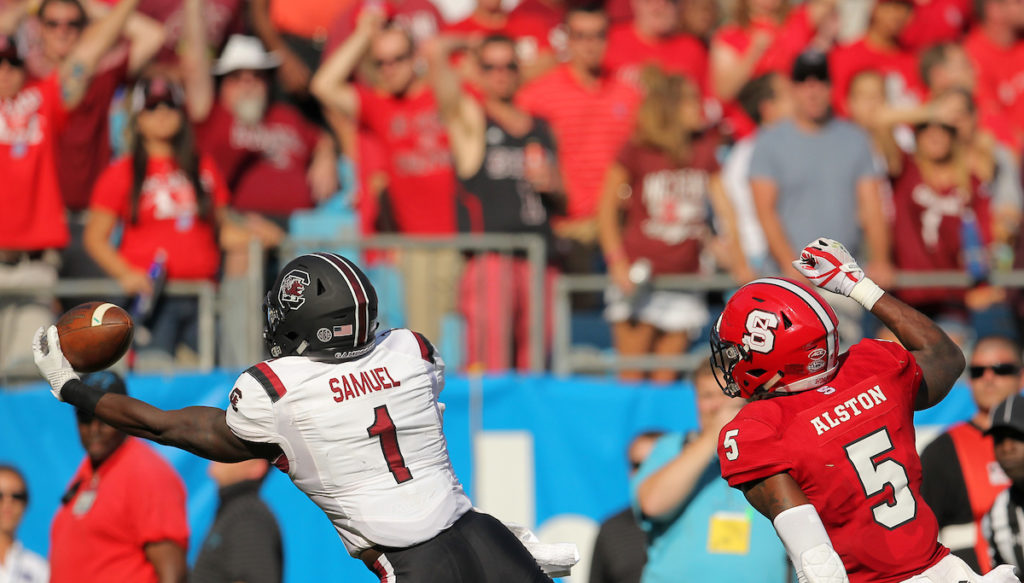 As for Bentley, South Carolina’s young signal-caller was poised, protected and in total command of the offense for most of the afternoon – showcasing his rapid development from last season.

The 6-foot-3, 220-pound sophomore from Opelika, Alabama completed 17 of 29 passes for 215 yards with three touchdowns and one interception.  He added several nice scrambles, too – including a clutch 13-yard run on third-and-long that kept alive a Gamecock touchdown drive in the second quarter.

Bentley moved to 5-3 as South Carolina’s starting quarterback, a job he won midway through last-season. 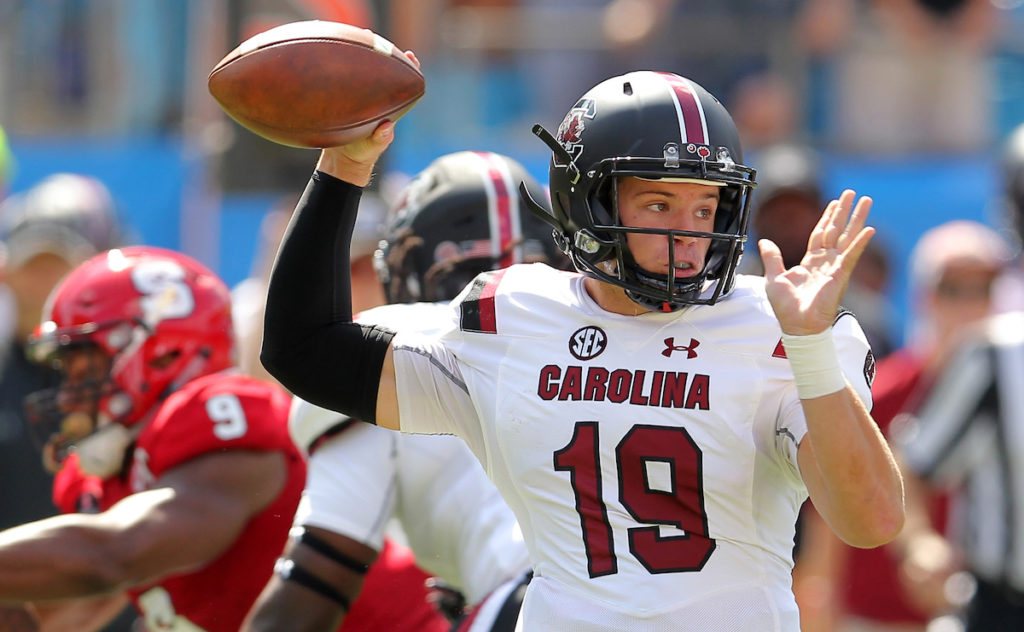 Perhaps the most impressive performance of the game, though, came up front – from South Carolina’s much-maligned offensive line.

After hearing for months about the size, speed and depth of the NC State defensive line – loaded with NFL prospects like 6-foot-4, 275-pound defensive end Bradley Chubb – South Carolina’s front five clearly had something to prove.

And prove themselves they did … at least when it came to providing pass protection.

Malik Young, Donell Stanley, Alan Knott, Cory Helms and Zach Bailey probably aren’t used to seeing their names in big, bold print, but they each deserve tremendous individual credit for their performance against an SEC-caliber defensive front – as does their first-year coach, Eric Wolford.

The big disappointment for Gamecock fans?   Their defense.

South Carolina’s unit – which was supposed to take a major step forward in 2017 with the return of all-SEC performer Skai Moore – struggled all afternoon to contain the NC State offense, led by junior quarterback Ryan Finlay.  The 6-foot-4, 205-pound Phoenix, Arizona native shredded the Gamecock secondary for 415 passing yards and a pair of touchdowns – picking up more yardage by himself than the entire South Carolina offense (246 yards).

It boils down to this: If the Gamecocks are going to take a step forward from last year’s 6-7 record, they will have to step things up dramatically on the defensive side of the football.

Furthermore Bentley’s father – running backs coach Bobby Bentley – is going to have to figure out some way to get a ground game going.  Sophomore running back Rico Dowdle carried the ball twelve times for only 27 yards against the Wolfpack – the second-worst total of his young career.

If South Carolina cannot consistently run the football – and is unable to tighten things up on defense – it could be a long season for Gamecock fans, who were spoiled during the peak years of former head coach Steve Spurrier.

Muschamp’s team opens its 2017 SEC slate next week on the road in Columbia, Missouri against the Mizzou Tigers.  Kickoff from Faurot Field at Memorial Stadium (a.k.a. “The Zou”) is scheduled for 7:00 p.m. EDT with ESPN2 providing national coverage. 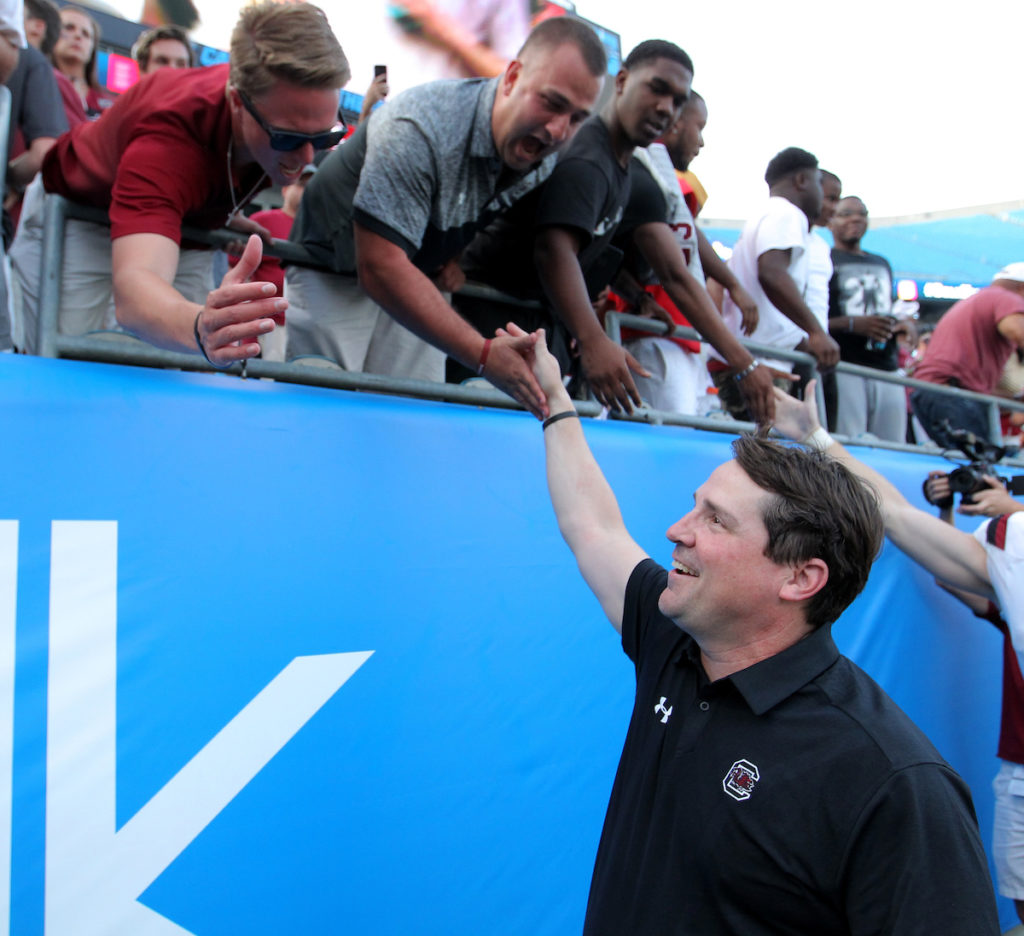