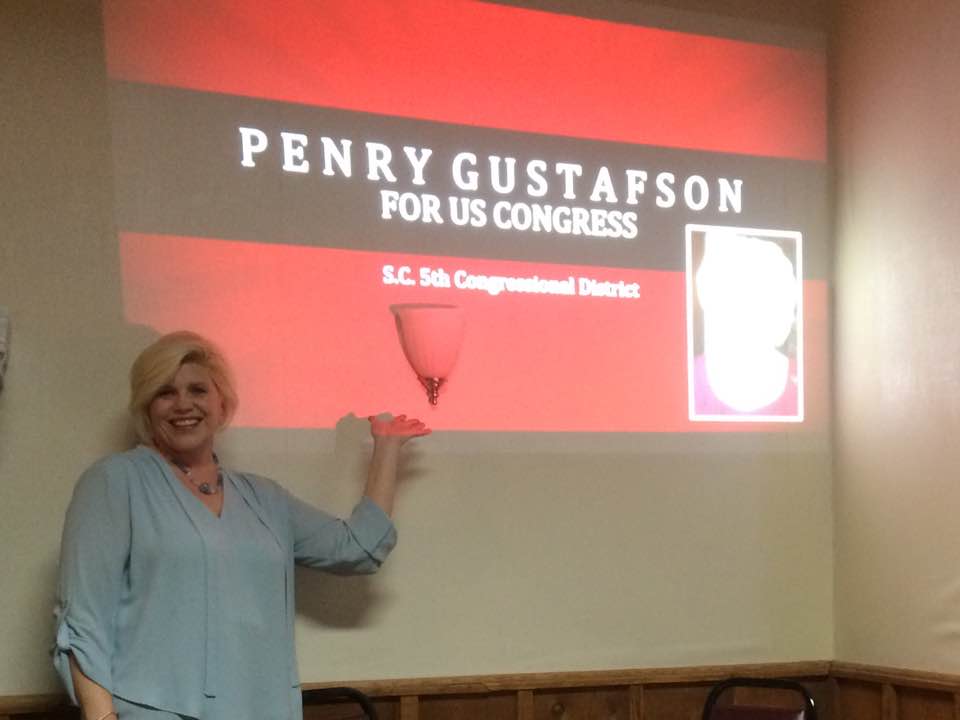 AS DOES THE REPUBLICAN PARTY …

Penry Gustafson based her congressional campaign on the idea that ordinary people needed a voice in Washington, D.C. – and that the Republican party needed to build its brand.  Now that she’s decided against seeking South Carolina’s recently vacated fifth congressional district seat, though, Gustafson says she plans on supporting a third-party candidate over the slate of GOP aspirants.

A Midlands community activist, Gustafson announced her bid for the “Fightin’ Fifth” earlier this month – arguing she could bring a citizens’ perspective to our nation’s capital and a new voice to the GOP.

“The Republican Party needs to broaden its scope by reaching out to more voices and being more inclusive,” she wrote on her campaign page.

This week, though, Gustafson issued a statement saying family considerations had compelled her to drop out of the race.

“I want to be absolutely certain about the right time to start – and the right place for my personal beliefs and political ideology,” Gustafson said in a statement.  “More importantly, my family has always come first before career, and at this moment, I am needed more there than anywhere else.”

Sources close to Gustafson’s campaign tell us her mother is very ill and that the would-be candidate is her primary caregiver.

Although she planned to file as a Republican, Gustafson said she will be supporting Josh Thornton – who is running in the upcoming special election as a member of the American Party.

Jim Rex – who served one term as a Democratic state superintendent of education in South Carolina – welcomed Gustafson to the party he helped found in 2014 to provide voters with alternatives to the two-party state.

“Penry Gustafson’s considerable talents and attributes – along with her unselfish patriotism – will be an important addition to our efforts to fix a broken system,” Rex said in a statement.

Three Democrats – Alexis Frank, Les Murphy and Archie Parnell – have announced their candidacies, too.  The race also features a Green party candidate (David Kluma) a Libertarian (Nathaniel Cooper) and a fusion candidate (Bill Bledsoe, who is currently running as both a Constitution and Libertarian party candidate).

The fifth district (map) covers the northern central portion of South Carolina – including the booming suburbs of Charlotte, N.C.  It has been reliably Republican since it was redrawn prior to the 2012 elections.  Mick Mulvaney won the seat in the Tea Party wave election of 2010 and held it until last month, when the U.S. Senate confirmed him as the new director of the White House Office of Management and Budget (OMB).

(In partisan primaries in South Carolina, runoff elections are held in the event no candidate receives a majority of votes in the initial round of balloting).

Tom Davis: The Real Fight To “Fix Our Roads”