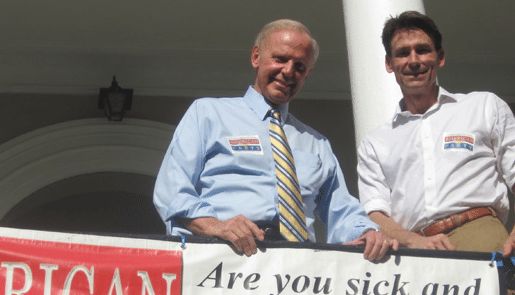 As we reported on months ago, two big government fiscal liberals in South Carolina – one Democrat and one “Republican” – have teamed up to form a new political party.

Former S.C. Superintendent of Education Jim Rex – a hard core statist whose tenure in office from 2007-11 was an unmitigated disaster for South Carolina academic achievement – has teamed up with cigarette tax hike supporter Oscar Lovelace to create the “American Party.”

Wait … what happened to the “Free Citizens Party?”

Guess this is the name these two anti-free market politicos settled on … and filed with the S.C. Election Commission (SCEC).

Anyway, according to the party’s official website, its goal is to renew the American dream “by promoting work, term limits and common ground public-policy.”

Obviously we’re all about the creation of legitimate options to the current two-party system in South Carolina, but this isn’t a new option … it’s the same Republicrat crap wrapped up in a new label.

“These guys aren’t providing an alternative to the status quo, they’re providing amplification for it,” we wrote in our initial assessment of Rex and Lovelace’s new political party.

Of course not everyone is likely to hold such a dim view of the “American Party.”

S.C. Gov. Nikki Haley has to be thrilled with its emergence … as her already flailing Democratic opponent Vincent Sheheen must now waste time and (scarce) resources making sure Rex and Lovelace don’t peel away liberal voters from him in this November’s election.