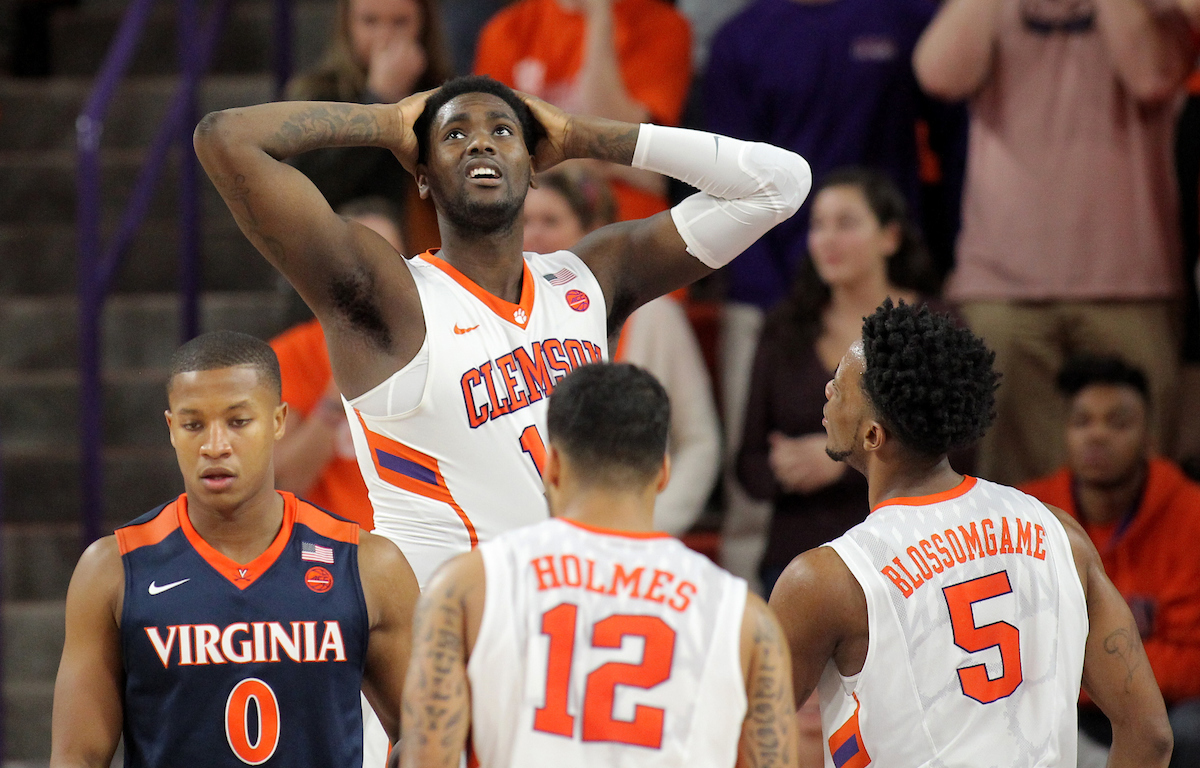 Three weeks ago, Clemson University’s men’s basketball team picked up a key non-conference road win against a ranked opponent – its arch-rival, the University of South Carolina.

The game was one of three contests South Carolina lost without the services of its star shooting guard, Sindarius Thornwell.

Well Thornwell is back from his mysterious suspension – and so are the Gamecocks.  Head coach Frank Martin‘s team won its fourth-straight tilt to open Southeastern Conference (SEC) play on Saturday – matching the program’s best start in two decades.

Up the road in Tigertown, though, head coach Brad Brownell‘s Tigers are failing to finish big games – a midseason swoon that hasn’t been helped by the 48-year-old coach’s anger management issues.

Seriously coach … talk to Martin about that.  He’s been there.

After racing out to an 11-2 start – including an Atlantic Coast Conference (ACC) season-opening road win over Wake Forest – Brownell’s team has now dropped four games in a row.

The latest?  A soul-crushing home loss to No. 19 Virginia that saw the Tigers erase a nine-point second-half deficit only to run out of gas (and focus) down the homestretch.

Throw in a similarly maddening last-minute road loss to nemesis North Carolina last week (and another late loss on the road against No. 23 Notre Dame) and it’s easy to see why Brownell is angry.

“This is our fourth league game that’s come down to the last minute and we’ve only won one,” Brownell said after the Virginia game. “That’s frustrating for all of us.” 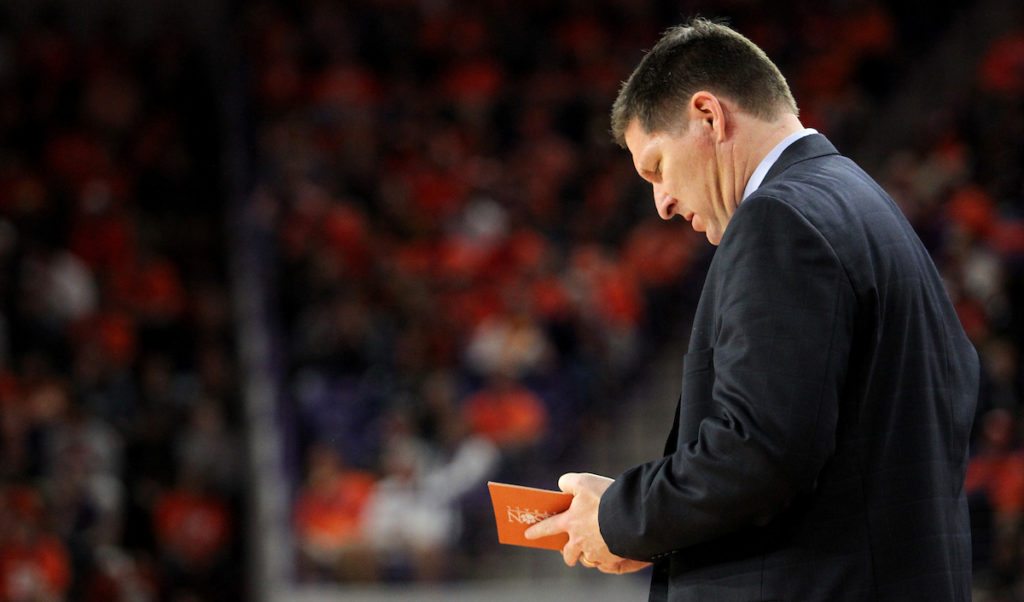 The road doesn’t get any easier for Clemson.  On Thursday night, the Tigers (11-6, 1-4 ACC) travel to Louisville, Kentucky for a primetime, nationally-televised matchup against the No. 14 Cardinals.  Next month, a pair of games against ninth-ranked Florida State loom … as does a road trip to Cameron Indoor Stadium in Durham, N.C. against the No. 7 Duke Blue Devils.

If the Tigers wish to receive an NCAA tournament invitation in March (a bid would mark the team’s first trip to the “Big Dance” since the 2010-11 season), they are going to need to win some of those big games.

Brownell, a seventh-year coach out of Evansville, Indiana, is going to need to win some of those games, too – especially after showing his ass in the aftermath of the Tigers’ home loss to North Carolina.

Compounding Clemson’s problems on the hardwood is the school’s success on the gridiron – including a hard-won 2017 national championship.  There’s fiscal pressure, too, as at least $63.5 million just got sunk into renovating the Tigers’ home arena, Littlejohn Coliseum.

Again, though, Brownell could probably ask South Carolina’s Martin what it’s like to watch his program struggling when the football team is tonning it.  Hell, he might actually have some useful wisdom.

To be fair: Clemson has hung tough in each of these close ACC losses – and Brownell has clearly assembled the talent his program needs to compete in what is arguably the best basketball conference in the nation.

Redshirt senior forward Jaron Blossomgame is a likely first-round NBA prospect, averaging 18.4 points, 6 rebounds, 1.6 assists, 1.3 blocks and 0.9 steals per game.  Blossomgame poured in 22 points in the Tigers’ loss to Virginia on Saturday, by the way. 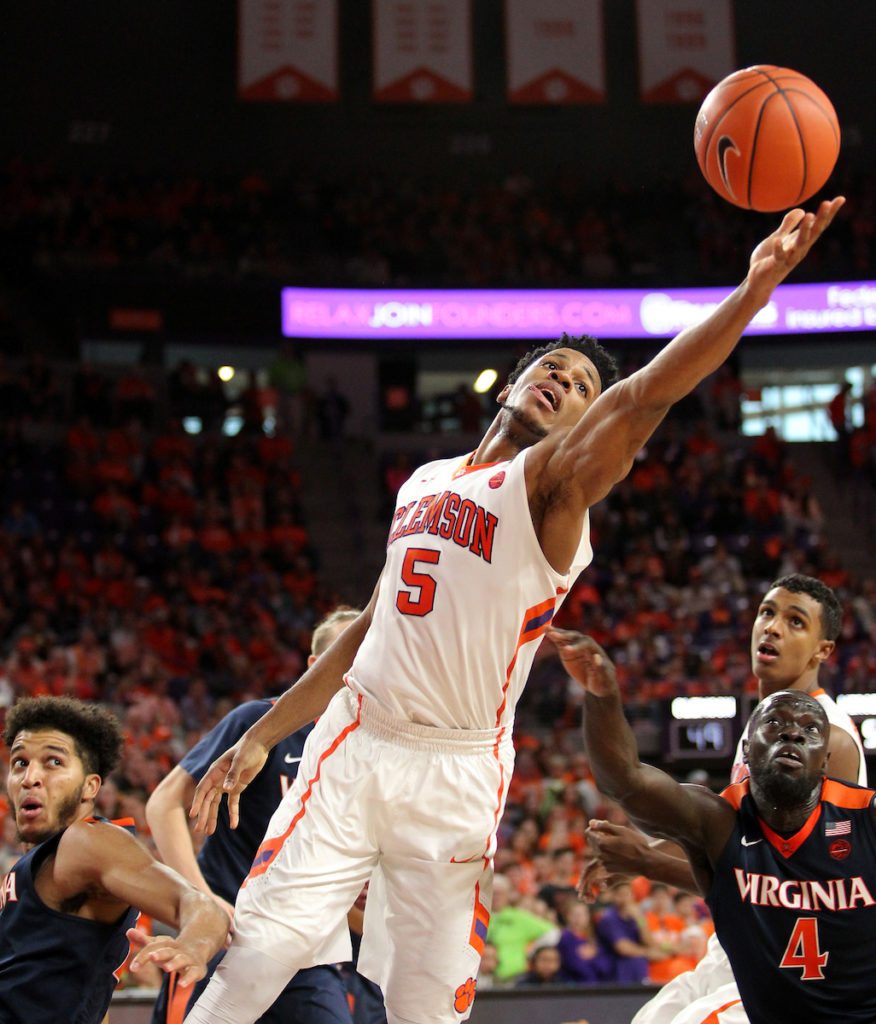 But despite Blossomgame’s heroics, close doesn’t count … especially in a town where fans, alumni, administrators and donors are giddy with the success of the football program.

It used to be that Clemson’s football program couldn’t finish.  In fact it got so bad, they even came up with a word for it.  We haven’t used that word in awhile because head coach Dabo Swinney‘s team has given us no opportunity to do so.

But let’s face it, Brownell’s basketball team probably needs to stop #Clemsoning soon … or else that hated hashtag might make a comeback.