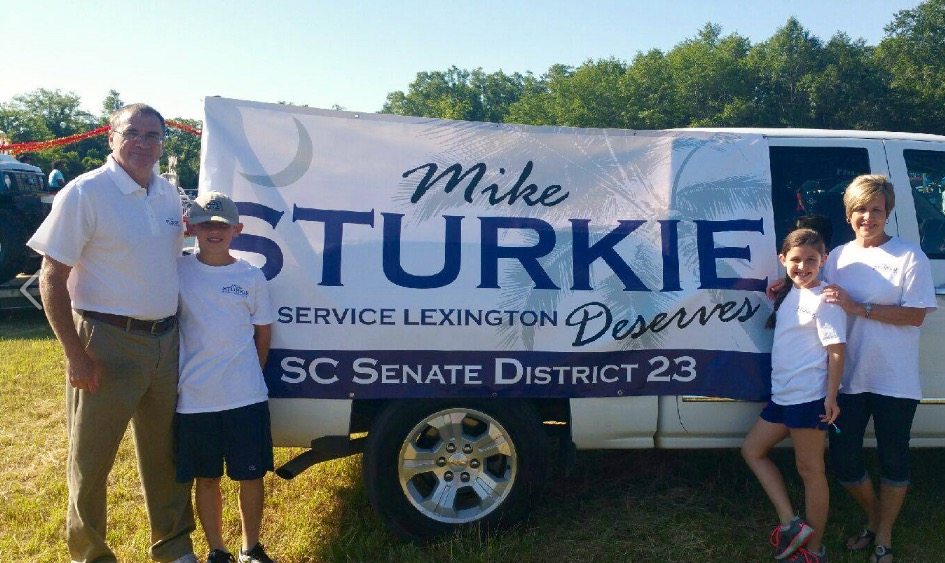 … IN A “CHRISTIAN” BUSINESS MAGAZINE

We’ve written previously about “businessman” Mike Sturkie, an aspiring Palmetto politician whose candidacy is backed by the “Lexington Ring” – a cabal of crooked cops and corrupt politicians allegedly involved in all manner of illegal activity in Lexington County, S.C.

Sturkie is running for S.C. Senate District 23 (map here) against incumbent Katrina Shealy, who we believe is one of the few genuinely good lawmakers in the Palmetto State.  Shealy has aggressively advanced free market reforms and pushed for radical fixes to state government – even if it meant pissing off the leaders of her own party.

She’s exactly the sort of lawmaker this state needs to elect more of … which is probably why the “Ring” (which includes the liberal lawmaker she defeated four years ago) is working overtime trying to take her out.

Anyway, judging from Sturkie’s latest audition for the job it looks as though the “Ringleaders” are going to have to try harder.  A lot harder.

“Mike Sturkie is like the little kid in school that walks up to the bully and punches him in the nose,” the website Midlands Christian Business Journal observed in a recent feature story on Sturkie.  “He doesn’t know he’s not supposed to do that.”

Um, okay … this sounds like the beginning of a compelling “David versus Goliath” narrative, doesn’t it?  That’s what we thought, too … especially when Sturkie explained to this “faith-based” publication how Lexington County officials shot down his efforts to open a private landfill in the area.

Their rationale?  The neighboring landowner – Target – didn’t want a trash dump next to its property.

“In Lexington County, the neighboring landowner must give approval for the landfill,” Sturkie told the paper.  “When time came for Target to give approval their fiduciary, who worked for one of the largest commercial real estate firms in Columbia, went back on his word. That was all the County needed to reject my landfill permit.”

What did Sturkie do?  According to him, he cut a deal with officials in the notoriously corrupt town of Lexington, S.C. to screw over the retailer – and get his landfill approved.

“I got on the phone with the Town of Lexington and asked them if they would like to annex Target into the town, a move that would gain the town one percent of the gross revenues Target would take in,” Sturkie explained.  “Of course they were hot and heavy over that but had no legal way to make it happen since only one side of the Target property bordered the town.”

Um, no.  They didn’t (of course you have to remember what sort of people we’re talking about, here).

“Mike got his landfill and the Town of Lexington got Target,” the paper reported.

We reached out to Target’s corporate headquarters in an effort to get their thoughts on all this, but didn’t immediately receive a response.  Our guess?  At minimum, we believe Sturkie’s quotes in this “Christian” article will be reviewed very closely by the retail behemoth’s legal department.

As for Sturkie, our hope is GOP voters in this district – Christians and non-Christians alike – will think long and hard before pushing the button for a guy who so blatantly and shamelessly advertises his mile wide self-serving streak.