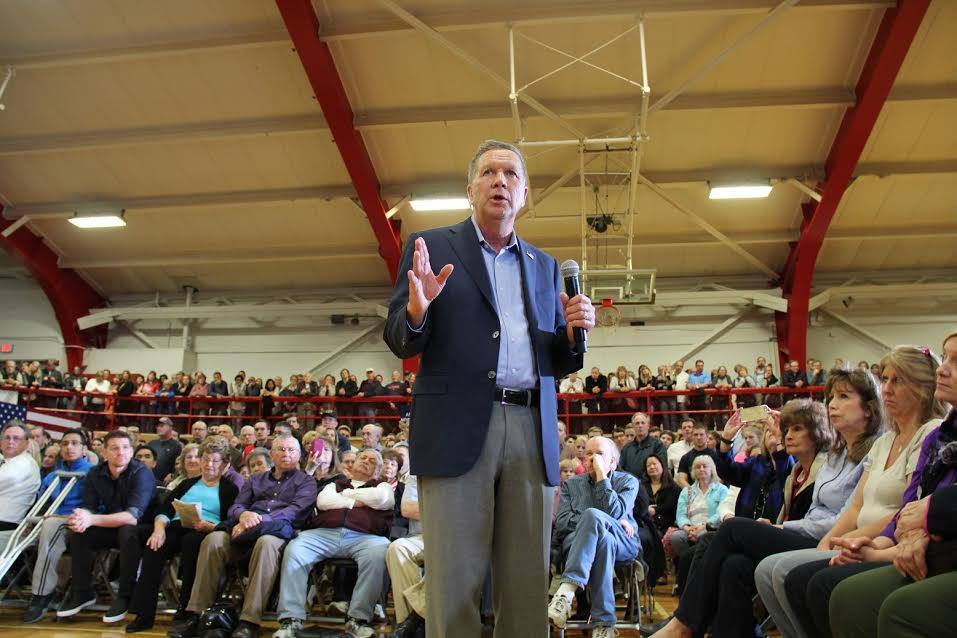 It’s mathematically impossible for Ohio governor John Kasich to win the 1,237 delegates necessary to capture the GOP presidential nomination.  It’s also politically impossible given Kasich’s status as the most liberal “Republican” in the race.

But Kasich’s bigger-than-expected win over GOP frontrunner Donald Trump in winner-take-all Ohio has made the prospect of a contested convention exceedingly likely.  And Kasich’s consultant, a former John McCain advisor, is openly discussing how that convention can be used to deny Trump the nomination.

According to reporter Darrel Rowland of The Columbus Dispatch, Kasich’s campaign is “laying the groundwork to win a strenuously contested convention when Republicans gather about 15 miles from the site of his victory celebration.”

“Tuesday night they announced the hiring of a quartet of nationally known operatives, including two who worked on opposite sides in the last contested GOP convention in 1976,” Rowland reported.

Rowland also interviewed John Weaver, Kasich’s national strategist – who said an “all-powerful” rules committee would hold sway over the convention and that “the grassroots delegates, activists, party leaders will make a decision about who the nominee is.”

“The grassroots delegates, activists, party leaders will make a decision about who the nominee is.”

Yeah … apparently the millions of people who voted in the GOP primary are irrelevant.

Is there any contested convention scenario that ends with Trump as the nominee?  Not according to Weaver.

“A convention of Republicans will not nominate the man unless he has 1,237 delegates,” he said.

So … what happens if the GOP elite deny Trump the nomination at a contested convention?

“If the Republican elite carry out their plans at the Ohio convention, it will be the end of their party and civil war,” one South Carolina Trump supporter told us.  “Besides that, the rest of the world will see us for the banana republic we’re becoming, which won’t help the dollar or our economy.  Either way their game is exposed and over.”

And of course, neither will my boss John Kasich but you know, we’ve got a good chance,, and if we get , lik e150% of all the votes cast going forward, there’s a mathematical chance we can win the nomination though what we are planning now is to just hang on till the end in the hopes that Trump (rhymes with dump)(or Cruz) will pick us as their Veep…

Yeah. Kasich has only been driven by a little old lady to church and the grocery store. Don’t pay any attention to the odometer. LOL

Trump doesn’t like Kasich.Not a chance for vp. Rubio still in consideration.

I hope not. I hope Trump picks his on VP, instead of letting the party pick one for him. We don’t need another Palin or a GHW Bush.

GHW Bush was probably the last good Veep we’ve had.

As long as he remained a Veep, he might have been okay. The problem with those, is they often advance.

Dreaming? No real GOP member (Rubio, Kasich) will hitch their wagon to Trump. No upside. Christie, maybe, since he’s pretty much dead man waddling in the GOP. Cruz, nope, he’s still got to win re-election in 2018.

RNC official says, “they pick nominee, not the voters”! When asked why hold primaries, “that is a good question”?
They will have Hell to pay!
Must watch and listen to link below!!!!!!!

**grabbing popcorn**
this is getting gooder & gooder

Wow, I remember a certain Grand Tango who used to constantly say something like “get your popcorn ready”. I guess you learn from those you love the most, huh?

We had a falling out when I truly accepted Jesus into my heart instead of just pretending.

Wasn’t it a good thing the RNC made a dog and pony about Trump signing a loyalty pledge to prove he was honorable? The Republican party deserves to go down in flames.

The big dogs in the party deserve to go down, however there are many millions of REAL Republicans that deserve an honest party. And our country doesn’t deserve what Hillary would bring on US.

What is that? More years like the Bill Clinton years? Please don’t throw me in that briar patch.

Any party that openly supports racist and anti-constitutional candidates deserves to die.

Good point. The Democrats need to go too.

Where? To the White House?
That’s gonna happen, for sure.
Thanks to Trump.

You must be talking about Obama and the way he destroyed the Democrat Party at the congressional ,state legislator and governor levels?

THe difference is, the Dems can come back. Not sure if the GOP can comeback after Donald.

If the nomination is stolen from THE DON, the GOP has handed the White House to Hillary!
OLE SLICK WILLIE be back up in the BIG HOUSE!!!!!!
YOU BETCHA!!I CAN SEE MONICA’s BLUE DRESS FROM MY CLOSET!!!!!!!!

And we can kiss our country goodbye.

Yep, nothing will kill the country like annual budget surpluses and a growing middle class. We need more Republicans to keep pounding that middle class into the ground so we don’t have to worry about them anymore.

“We need more Republicans to keep pounding that middle class into the ground so we don’t have to worry about them anymore.”

Stock Market way up
Unemployment way down
Job Creation way Up
Annual Deficit as a percentage of GDP down
Housing Market UP
Inflation low
Insurance without preexisting conditions in place
Social Security and Medicare in tact.

I could go on but all of these thing have been good for the Middle Class. The middle class has not an inflation adjusted increase in pay since the 1980s, except during the Clinton years and the Obama years. In the meantime the percentage of the government their taxes support has gone up while the percentage supported by the top 5% has gone down.

If you don’t think the middle class is better off today than when Obama took office, I think you are nuts.

Obama inherited a mess, we are still in a mess but it is damn well more tidy than it was before.

We didn’t get to keep our doctor or our insurance provider as promised. Now we have to pay these bastards a “fee”, “fine”, or whatthehellever, for not having insurance. It doubles each year.

By “job creation”, might you be referring to the syndrome whereby people are forced to work two, three, or more, McJobs, rather than the one “real” job that was standard for as far back as most of us can remember? Gosh, we’re so blessed…

Social Security and Medicare: still teetering on the brink.

National debt now many trillion$ higher than when he started.

Are you for real?

First, I will address insurance. Prior to Obama millions were uninsurable because of preexisting conditions. Second the rate of increase in insurance rates is actually lower, though not zero, that it was prior to the affordable care act.

Third the National debt is as high as it is because the economic collapse under Bush sent revenues through the floor. At the same time Bush did not put his three trillion dollar wars in the budget so those had to be absorbed in budgets after he left office. Finally, since the economy has recovered and revenues have been restored to pre great recession levels. The annual rate of increase in the deficit is less than it was before the great recession.

I just got a nice raise.

Glad for you man! I’m serious!

I don’t hear many ssy that these days.

Not true. In fact, unemployment is considerably worse, but the numbers are skewed by people no longer participating in the workforce (looking for work). Job creation up? WHAT jobs???? Pretty much everything you’re citing is a lie.

It’s what they do best.

Those “annual budget surpluses” didn’t really exist…. it was just creative accounting. And it isn’t just economy, but civil rights the Dems will strip away. Just look at that lunatic Obama just nominated for the SCOTUS….

And I guess you’d expect Judge Smails to let Rodney Dangerfield’s character to be president of Bushwood CC?

Democrats in Ohio gave Kasich the victory.12 percent of them in Cuyahoga County alone switched to Republican ballots to vote for Kasich as they knew Hillary would not need their votes.I was poll watching yesterday and there was an organized effort by Dems to support Kasich.

This merely some of that $600,000 speaking Kasich got from Soros recently.

This one fact should be enough to stop anything Kasich tries.

Kasich is an egomaniacal liberal that was elected because of the collapse of the Democrat Party in Ohio.Democrats love him.Republicans wouldn’t elect him again.

Strange, because according to Fox News he has an 80% approval rating among Ohio Republicans.

You’re talking to pogo. He’s living in a strange fantasy land. FitsNews is his only contact with our world.

And here I thought GrandTangoland only had a population of one. LMAO!!!

I guess if that was true he would have gotten more than 35 percent of Republican voters yesterday?10 percent oh his 45 percent were Hillary voters that asked for a Democrat ballot.Kasich even thanked them last night .

He’s a moderate Republican, but Republicans on the national stage aren’t interested in moderates, so they will lose swing states and elect Hillary by default.

Soros didn’t donate, it was 2 men associated with him thru the hedge fund biz who donated – they do the same thing Donald does donate to both parties. Lindsey, Jeb, Rubio, Christie all received donations from them this election season.

Agent/principal relationship. He is still a slimy reptile and has no business fomenting Marxist revolutions in countries he is not a native of, but of course this is standard operating procedure for his tribe. Kasich clearly doubled down cucking himself prior to Tuesday regarding the 3rd world invaders.

Tribe? You do fit right in with the Republican Party. Show us your KKK hat.

Did I trigger you? Yes, Soros is Jewish. He is actively working with the republican establishment (((neo-cons))), i.e. President of Ohio John Kasich. These are facts. What does a bygone reactionary group have to do with republicans?

The story of yesterday is that Rafael Cruz is dead. He has nowhere to go. He cannot win outside of a state controlled by his very narrow base. Trump supporters will not support Cruz. He is the Canadian born son of an illegal immigrant, and a religious nut. He may do well in Utah, but he has nowhere to go beyond that. Its time for Trump to start wrapping this up. Rafael needs to drop out. Kasich will not because he has the support of the billionaire donor wing of the GOP.

Trump will defeat the establishment and Hillary.

Trump only has to win 55% of the remaining delegates to reach 1237.

Trump was actually bleeding delegates in IL because his supports didn’t vote for the correct delegates. Probably because they didn’t have white names.

Kaisch made some key hires last night. He hired two consultants who were a part of the last Republican contested convention. He’s gearing up for the floor fight, should be entertaining.