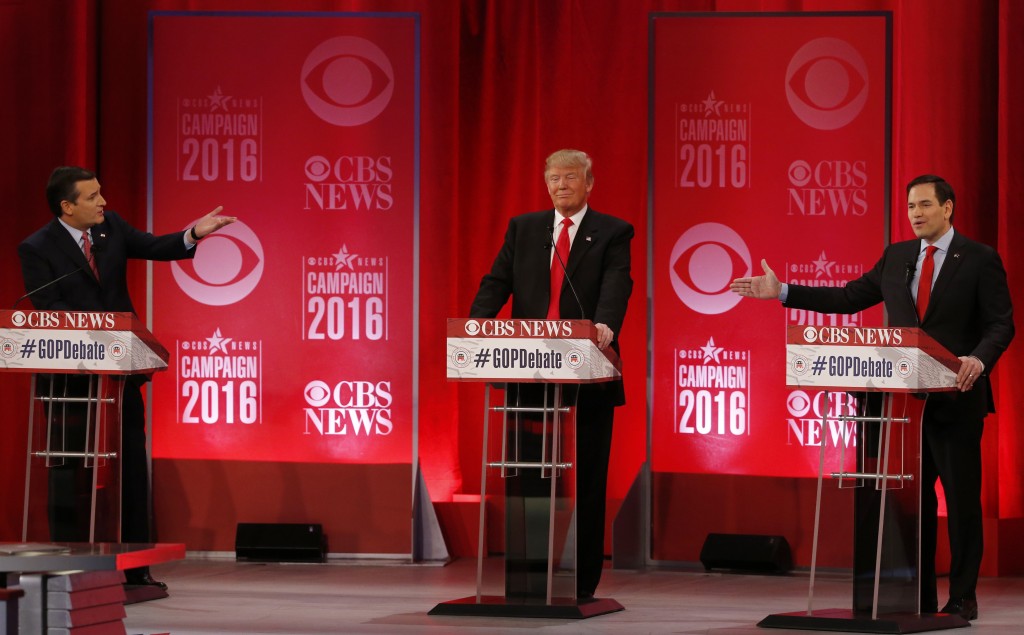 “CONSERVATIVE” ACTIVISTS FACE BACKLASH AFTER THREATENING TO FORM THEIR OWN PARTY

The wholesale implosion of the “Republican” party continued this week when so-called “conservative” radio host Erick Erickson convened yet another establishment conclave in the hopes of derailing the ascendency of GOP frontrunner Donald Trump.

Erickson gathered a group of “conservative” luminaries at a Washington, D.C. hotel – weeks after leading GOP politicians and business leaders attended an anti-Trump gathering at a posh resort on the Georgia coast.

The goal of Erickson’s gathering?  To prepare for the possibility that Trump secures the necessary number of delegates to become the GOP presidential nominee.

“I think that if Donald Trump becomes the Republican nominee, the Republican Party ceases to be the party that I was an elected representative of,” Erickson said.  “It becomes a protectionist, anti-immigration party, which is something I want no part of. So there is going to have to be the groundwork for a new political party in the country that represents people who typically have been Republican voters in the past.”

Erickson said his plan to form a new party was a “fallback” strategy – in the event efforts to deny Trump the nomination are unsuccessful.

“The plan is still to try to stop him from getting 1,237 delegates,” he said.  “We all have to rally to Ted Cruz and figure out what to do about about John Kasich in order to deny Donald Trump 1,237 delegates which he would need to be the nominee.  If we can do that, everyone may set aside the third-party option.”

Not all establishment “Republicans” are on board with Erickson’s efforts, though.

“I am not sympathetic at all to the Erick Ericksons of the world,” former U.S. Speaker Newt Gingrich said.  “If they want to form the ‘Let’s help elect Hillary Clinton club’ fine, but they ought to be honest about it.  Any effort to help anybody but the Republican nominee helps Hillary Clinton.”

While Gingrich focused on political realities, it was former Arkansas governor Mike Huckabee who nailed the essence of this anti-Trump movement.

“It’s just the most remarkable thing,” Huckabee said.  “I was listening to Erick Erickson, who I like, and have a great deal of respect for.  But when Erick said that ‘we got together and decided that this wasn’t going to work’ – I just – I was screaming at the monitor.”

“Who is we?” Huckabee asked, incredulously. “I thought we had voters?”

Huckabee – who dropped out of the race following a disappointing performance in early-voting Iowa – said his defeat shouldn’t entitle him to “go start a third party” or try to “blow up the Republican Party because I didn’t get my way.”

“I accept that in an election, voters get to make this decision,” Huckabee said.  “(But) the message that’s coming across is ‘the voters are stupid, so we’ll figure out a way to make the decision for you because we don’t trust you.’ Newsflash: The voters don’t trust the people who have been in power. They’re sick of them, they’re tired of their orthodoxy, it has hurt them.”

Huckabee wasn’t done, though.  He proceeded to rip into Erickson and his fellow “conservative activists” as to the real reasons they are attacking Trump: Money. And Power.  And maintaining their access to both.

“What Donald Trump threatens is not just the political orthodoxy, what he threatens is the economic engine of the political consultant class, who always are going to be able to make a lot of money on every election because there’s an insular group of consultants and advisors – and these are not people who are in Donald Trump’s orbit,” Huckabee said. “And they know that if Donald Trump gets elected, it is their economic world, their – their power.  It disappears. It goes away. They’re scared to death that they’re going to be in the shape that American workers have been in when they’ve lost their jobs and they don’t have pensions – and it’s terrifying to them.”

“Well, guess what? Maybe if they’d of been a little more sensitive about how terrified American workers were, they wouldn’t be faced with this,” Huckabee added.  “So forgive me if I don’t have to get out a box of Kleenex right now and cry all over my britches because this is about when voters make a decision, you suck it up and accept it.”

This website has never been friendly to Huckabee.  In fact we were harshly critical of his 2016 candidacy.  But let’s be honest: He absolutely nailed it here – exposing this “conservative” movement for exactly what it is: Sheer self-interest masquerading as principled obstructionism.

Obviously establishment self-interest is par for the course in politics … but in this case the elites are actively seeking to subvert the expressed will of the electorate.

Which is a dangerous new dimension indeed …

@fitsnews This upheaval has been needed since the GOP forced John McCain on us.