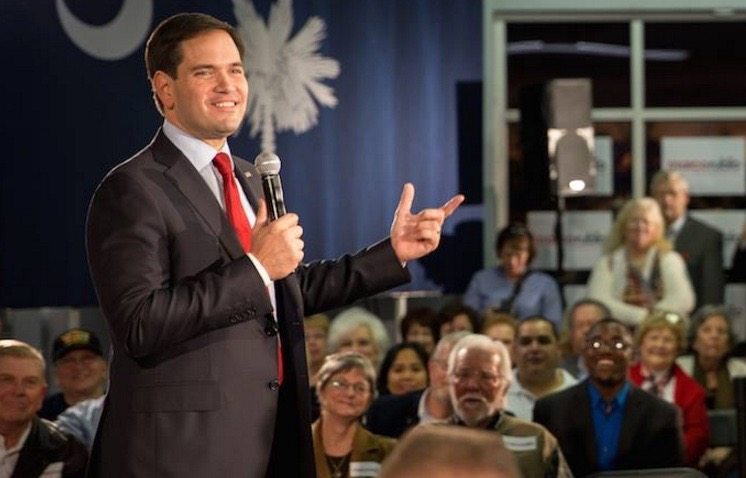 It’s no secret U.S. Senator Marco Rubio of Florida has basically given up any pretense of representing his constituents while running for president.  In fact it’s gotten so bad one of his home state newspapers actually called on him to resign.

“You are paid $174,000 per year to represent us, to fight for us, to solve our problems,” the editorial board of The Sun-Sentinel wrote.  “Plus you take a $10,000 federal subsidy – declined by some in the Senate – to participate in one of the Obamacare health plans, though you are a big critic of Obamacare.”

“You are ripping us off, Senator,” the editorial continued.

Anyway, while campaigning in early-voting New Hampshire this week – where the GOP establishment is in full-on panic mode – Rubio took credit for passing “additional sanctions on Hezbollah,” a Lebanese-based militant Shiite Muslim organization.

The vote was one of many, many, many tallies in recent years that Rubio skipped.

That’s right … he wasn’t there.

Pouncing on the miscue?  Former Florida governor Jeb Bush – who is battling with Rubio for the support of the “Republican” status quo crowd.

“When he was asked what his main accomplishments were, one of them was dealing with Hezbollah, which was a 93 to nothing vote that he didn’t go to,” Bush said.  “You know, this is not real. In Iowa, one of our last events was with Chuck Grassley, the guy has not missed a vote for 22 and a half years.  He probably has a list of accomplishments in service to the State of Iowa and to this country that is pretty real.  Marco doesn’t have it.  He’s gifted.  Ted Cruz doesn’t have it.  I’m not saying they’re not talented people.  But they don’t have a record of accomplishment.”

Look, we don’t care about Hezbollah.  Why not?  Because unlike typical tough-talking, warmongering “Republicans,” our website doesn’t bend over to accommodate Israel – which we view as a bossy little country that has taken far too many U.S. tax dollars (even though it vowed it would stop taking them decades ago).

But whatever you think of Israel … or the efficacy of global interventionism … Rubio bragging about a vote that he missed is pretty funny stuff.

Of course as we’ve said all along, our problem with Rubio isn’t the votes he’s missed … it’s the votes he’s taken.  Most glaringly, we’re referring to his deciding vote in support of U.S. president Barack Obama‘s crony capitalist trade deal – “Obamatrade.”

Ironically, Rubio was busy bashing Obama prior to claiming credit for “sanctioning” Hezbollah …

There’s no doubt Rubio is a smooth talker.  In fact he gives some of  the best, most polished answers to certain red meat questions we’ve ever heard – and we’ve praised him accordingly.

The problem?  Like former GOP nominee Mitt Romney – the last person who sold “Republicans” on his electability – Rubio simply cannot be trusted to tell the truth.

Jeb Bush Doubling Down On "I'm With Stupid" Strategy