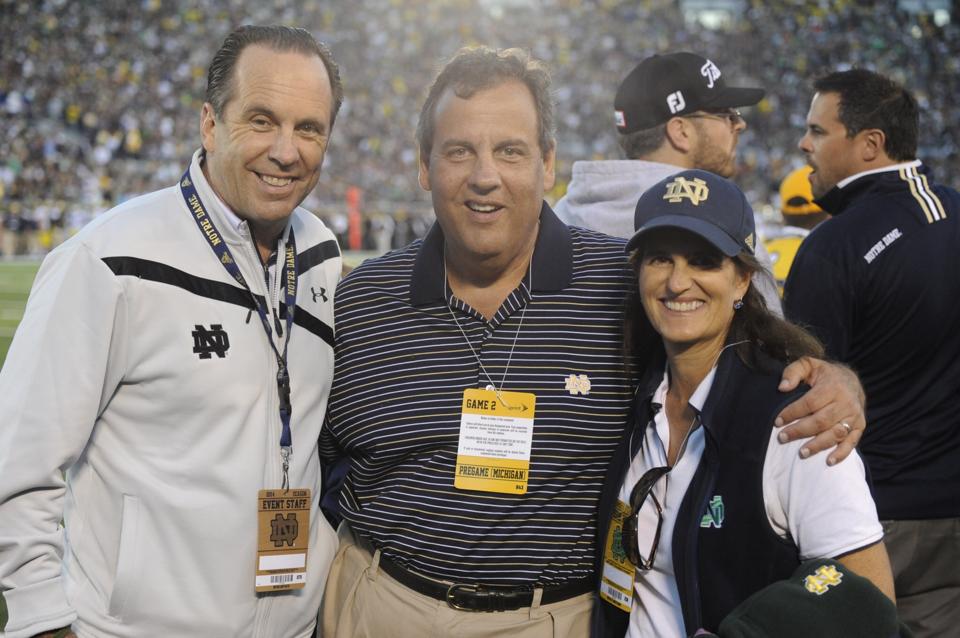 No, not the breastfeeding one.  We’re talking about the one involving the corrupt political appointee of New Jersey governor Chris Christie – the scandal that forced the company’s CEO to resign (and then get a nice corporate crony bailout).

Anyway, it looks as though that’s not the extent of Christie’s “plane problems.”

In August of 2014 Christie’s oldest daughter, Sarah Christie, left home to attend the University of Notre Dame in South Bend, Indiana.  In fact her parents joined her on the trip.

Months earlier, Christie referenced his “daughter of the Midwest” in touting his presidential aspirations to Windy City bigwigs.

“Like it or not, you’re going to see a lot more of me at Midway and O’Hare to make the drive to South Bend,” Christie told the Economic Club of Chicago.

For those of you not hip to Midwestern geography, that’s a one hour and forty-five minute trek … depending on traffic.

Of course the Christies won’t be making that drive …

One month prior to Sarah Christie’s matriculation, United Airlines announced a direct route from … wait for it … South Bend to Newark, New Jersey.

“This is the first direct route to serve the New York City market and a huge gain for the South Bend Airport,” local media in South Bend gloated.

Has Christie been spending a lot of time in South Bend since this flight was established?

Ordinarily, we’d look at a story like this and say “who cares.”  But given Christie’s history with United (and the previous flight scandal involving his crony), it indicative of a pattern of corruption.

As we previously reported, former New Jersey attorney general David Samson – the guy who paid for Christie’s 2014 bridge-gate scandal with his job – was the beneficiary of another questionable flight established by United.  Specifically, the company established a direct route from Newark to Columbia, S.C. – which is fifty miles from a historic mansion in Aiken, S.C. owned by Samson and his wife.

Why’d they establish this money-losing, mostly-empty flight?  Apparently Samson didn’t want to make the drive from Charlotte, N.C. to Aiken.

Why is this corrupt?  Well, “the chairman’s flight” was approved at a time when United was trying to get the powerful Port Authority of New York and New Jersey (led by Samson at the time) to invest tax dollars in a $2 billion upgrade of Newark airport, one of its busiest hubs.

And guess what … they did.

United got its airport upgrade, and Samson got his flight.

In fact United didn’t put the kibosh on the flight until April 1 of last year – three days after Samson resigned from the port authority in disgrace.  This September, United chairman and CEO Jeff Smisek and two of his top executives stepped down in connection with a federal probe which included “the chairman’s flight” as one of its areas of focus.

Is “the daughter’s flight” also part of the ongoing federal investigation?

We’re not sure … but our guess is Christie will be answering that question on the presidential campaign trail very soon.

He should be compelled to answer, too.

After all, last year Christie’s administration refused to take back $100,000 in taxpayer incentives provided to United to establish routes into Atlantic City.  United later cancelled these routes, but Christie allowed the company to keep the money it received from taxpayers even though it was required to repay it.

Obviously that’s not as big a deal as a multi-billion dollar airport upgrade – but it’s a clear conflict of interest nonetheless.

Trey Gowdy Did What?