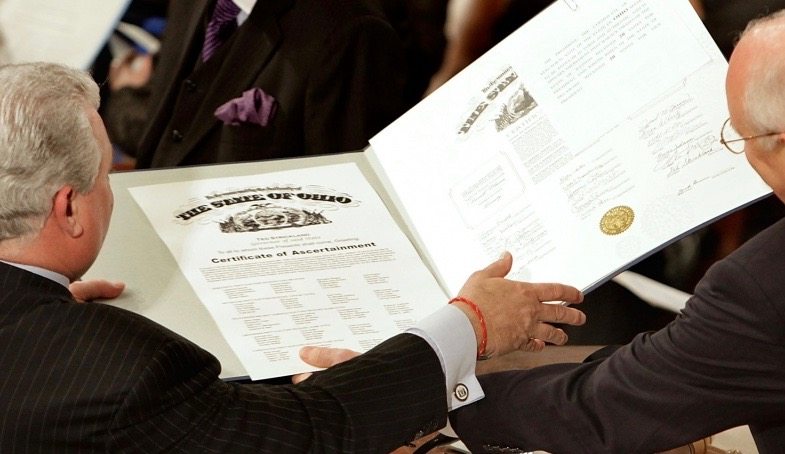 Electoral math has become increasingly tricky for “Republicans” in recent years.  The GOP – a.k.a. the “other” party of big government – starts every national election at a decided disadvantage, one that seems to be growing steeper every four years.

Oh, and they seem oblivious as to how to fix it …

Here’s the root “Republican” problem: There are 538 votes in the Electoral College, and as things currently stand it’s twice as easy for Democrats to win a majority of those votes as it is for the GOP.

So, with 418 electoral votes on “lock down” that means the race hinges on 120 “swing” electoral votes – of which Democrats must win just forty-three to capture the White House.  Meanwhile “Republicans” have to win seventy-nine of those electoral votes to get to 270.

But that was it …

Barack Obama captured the 227 electoral votes he was supposed to … and went on to claim the swing states of Florida, Pennsylvania, Ohio, Virginia, Colorado, Iowa, Nevada and New Hampshire for an additional 105 electoral votes.

In other words he won.  Big.  Over a GOP candidate who was billed as the party’s most “electable.”

The 2012 campaign exposed in no uncertain terms looming fault lines within the “Republican” party.  Awarded control of the U.S. House of Representatives by the Tea Party movement back in 2010, the GOP veered wildly to the left under former U.S. Speaker John Boehner – betraying the limited government expectations of its base supporters.

Meanwhile its “electable” presidential nominee veered all over the place … making it abundantly clear in the process that libertarians and Tea Party backers were not welcome in the his tent.

Was Romney hurt by third party candidate Gary Johnson (the fiscally conservative, socially libertarian candidate who was endorsed by this website in the general election)?  Not electorally, no.

Only in Florida did third party support – at 0.9 percent – actually outdistance Obama’s margin of victory (0.5 percent).

Still, as we noted, there’s much more to consider than third party votes cast on behalf of a particular candidate … what about the votes that weren’t cast?

Broad swaths of the GOP electorate simply sat on their hands rather than vote for a liberal candidate like Romney.  Also, Romney’s margins of defeat in states like Ohio (107,241), Virginia (100,499), Florida (46,666) and New Hampshire (40,421) are instructive when compared to the primary vote totals of libertarian-leaning candidate Ron Paul.

Did all of his voters stay home in November?  Probably not … but many of them clearly did.

Oh, and if you take those states (and their 64 combined electoral votes), Obama’s total in the Electoral College drops to 268 and Romney’s jumps to 270.  In other words, those four states were the difference between President Romney and four more years of Obama.

(Assuming you believed there was ever much of a difference to begin with).

As the 2016 election cycle takes shape, the angst of the “Republican” base has almost consumed the party establishment – giving rise to the populist, politically correct appeal of billionaire businessman Donald Trump.

But there’s a base problem in the camp of presumed Democratic nominee Hillary Clinton, too.

Sure, Clinton currently enjoys a huge 25 percentage point lead over independent socialist U.S. Senator Bernie Sanders of Vermont.  But Sanders is ahead of Clinton in early-voting New Hampshire, and crowds at his political rallies have been big and energetic.

There’s also a belief among those occupying the far left that Clinton is “Republican lite,” sort of like the far right viewed Romney as “Democrat lite.”

They’re also not fans of her corporate cronyism and “neoconservative” warmongering.

“I strongly believe that Hillary will kill the momentum that has been generated over the last eight years by Barack Obama, the first liberal (not progressive) Democrat to be president in years – and that will do more damage to the Democratic brand than four years of a Republican president would do to the country,” liberal Walter Bragman recently wrote for Salon.  “I am not saying that four years of a Republican would not be worse for the country than four years of Hillary in the immediate; I am saying that four years of Hillary will do more long-term damage by prolonging the Democratic realignment.”

Bragman isn’t alone.  Another columnist for Salon wrote last month that Clinton had “evolved towards Republican viewpoints on war, foreign policy, Wall Street, and other issues.”

“I have a great deal of respect for Hillary Clinton and admire her attempt at healthcare in the ’90s,” H.A. Goodman wrote, prior to wishing “the Hillary Clinton of the early ’90s were around today.”

She’s not, though … and Sanders is filling that void with an uncompromising energy.

Like Paul on the GOP side, Sanders is an unapologetic ideologue – meaning the supporters he attracts are far more likely to stay at home on Election Day if there is no candidate on the ballot who represents their views.  In fact this problem compounds itself for Clinton in a general election.  If she runs to the middle, she loses Sanders and his backers.  If she runs to the left in an effort to bring them into her fold – she loses the middle.

At this point, Clinton is hoping progressive fear of a GOP president will keep Sanders’ supporters in line.

“I think it’s very dangerous to look at the alternatives and believe that your staying home is a responsible choice,” she said recently when asked if she had a message for disillusioned Sanders’ supporters. “It’s hard for me to believe that anybody who would support Senator Sanders would want to see any of the Republicans elected president of the United States.  I would just ask that when this nomination is wrapped up that they come and join with us to make sure that we don’t turn the White House back over to the Republicans.”

That’s hardly the sort of appeal an ideologue would give much thought … and it could create major electoral math problems for Clinton in the event she captures the Democratic nod.

Bottom line?  Both the liberal and conservative bases are in open revolt against the two-party establishment in Washington, D.C., which is presenting very real problems for potential standard-bearers looking to get to 270 in 2016.

Trey Gowdy Did What?