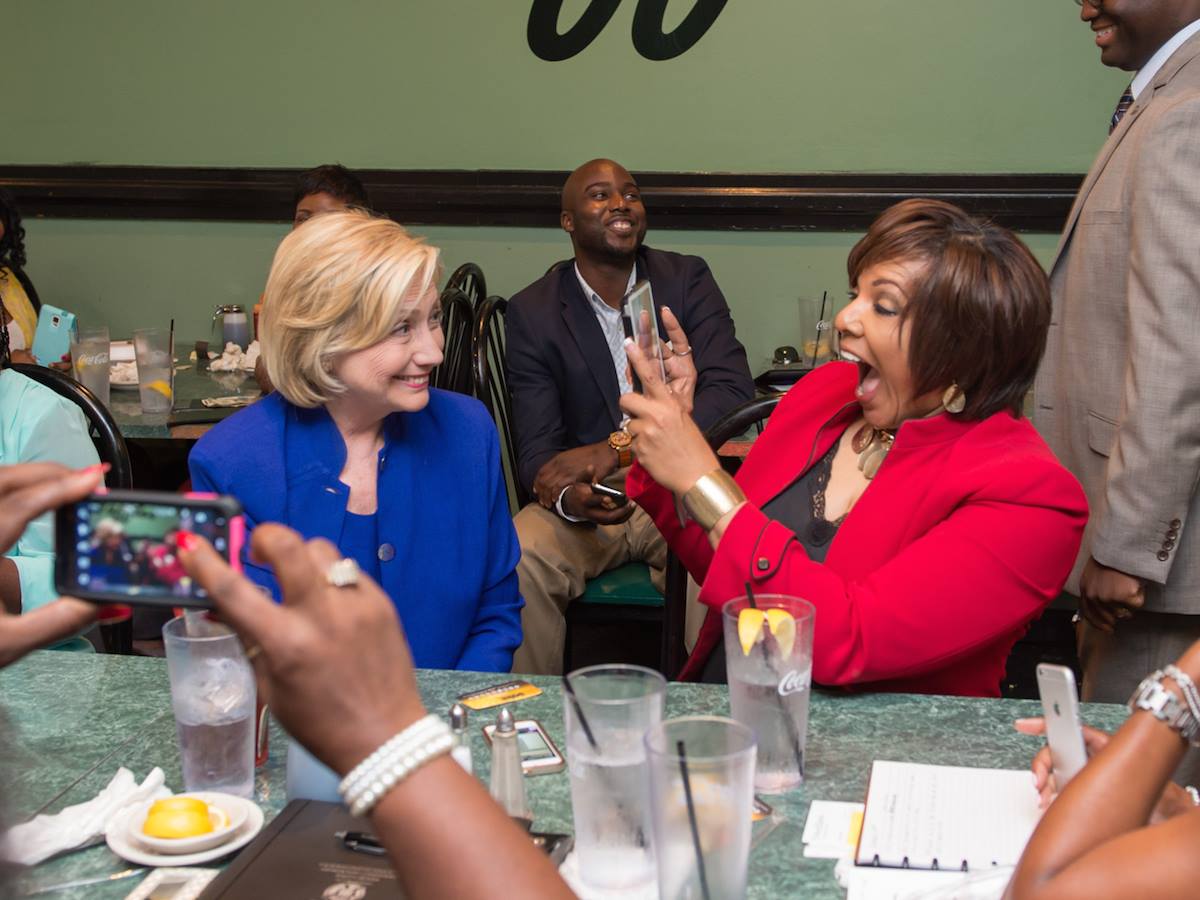 || By FITSNEWS ||  A week after the first round of explosive revelations, Hillary Clinton is getting rocked again for her role as a global warmonger …

Once again it’s the International Business Times on the case (reporters Matthew Cunningham-Cook, David Sirota and Andrew Perez collaborating) … and once again it’s all about foreign countries who donated to her foundation getting sweetheart weapons deals.

Of course this time, it’s chemical … to say nothing of hypocritical (seeing as Clinton was publicly supporting protests against some of the very governments her agency was equipping with chemical weapons).

The Clinton-run State Department’s approval of chemical and biological exports to the Egyptian government increased in volume just as dollars flowed from Mubarak-linked entities into the coffers of Clinton family concerns. A group closely associated with the Mubarak government paid Bill Clinton a $250,000 speaking fee in 2010, less than 4 months before the Egyptian revolution began. In 2012, a firm with an ownership stake in the company that manufactured the tear gas reportedly used by Egyptian security forces against the uprising paid $100,000 to $250,000 for another Bill Clinton speech.

The approval of American chemical weapons sales to Egypt as Mubarak’s associates were stocking Clinton family interests with cash is but one example of a dynamic that prevailed though Hillary Clinton’s tenure as secretary of state.

According to the report, Clinton’s U.S. State Department approved $66 million worth of “toxicological agent” sales to nine governments that either donated directly to her family foundation or paid her husband speaking fees.

It also outlines how Clinton endeavored to limit transparency into weapons sales.

The presumed Democratic nominee – who is busily campaigning amongst “everyday Americans” – has already been under fire for discrepancies in her foundation’s tax returns (specifically related to contributions from foreign governments).  And of course there’s that whole email scandal.

The common thread in all of this?

Of course it will be a miracle if Clinton is ever held to account for this by America’s increasingly left-leaning fourth estate.

Mande: Is Bruce Jenner A Woman? Is Barack Obama Black?

Of course it will be a miracle if Clinton is ever held to account for this by America’s increasingly left-leaning fourth estate.
Read more at https://www.fitsnews.com/2015/06/03/more-foundational-warmongering-from-hillary-clinton/#SBlfPK6yIOtpyxf3.99

This is almost becoming comical. Using her Secretary of State position and the State Department to coerce foreign government and foreign leaders to pay bill Clinton’s exorbitant speaking fees and make contributions to The Clinton Slush Fund( The Clinton Foundation.)
Don’t tune in to the MSM newscasts tonight and expect any anything about this, they will be too busy trying to dig up dirt on her opposition.(both Democrat and Republican)

What are you doing criticizing Her Royal Majesty, the Queen HiLIARy, the Annointed One, the Champion of the Middle class, the One we have all waited on to save the Little People??? Go to the end of the line!!

Exactly. If you want the same thing as everyone else, stand in line like everyone else. Don’t expect who you are to get you in front of other people who have patiently waited their turn.

Republicans don’t understand that concept. They are use to breaking in line,a dn bullying people. After all, money should get you ahead of the commoners. You know Romney’s 42% of the population we can ignore. I mean, lets say you are a Koch Brother making a phone call to the Governor of Wisconsin to talk about union busting. You can’t be expected to wait your turn like the little people. Thats obvious, right..

Jack – you’re so funny. Ignorant as hell like most loony leftists but funny nonethless. Why can’t you stick to the subject at hand, which is Her Royal Majesty HiLIARy? You know…the entrenched, DC establishment, ultra supreme rich 1 percenter who hasn’t driven her own car in 20 years, won’t answer questions, lied at the coffins of those who were killed in Benghazi as to how they died, illegally kept a private email server while (supposedly) working for the taxpayers and then deleted said emails when things got hot, the one responsible for the disastrous “Russian Reset,” and the one who granted favors to foreign governments in exchange for billions flowing into the coffers of the Clinton Slush Fund?

All I see from you is the typical Dumbocrat drivel: Koch brothers…blah, blah….Romney…blah blah…Fox News…blah blah blah. Tell me you’re going to pull the lever for the most incompetent, unqualified, dishonest, malfeasant, unserious, not genuine and untrustworthy candidate of my lifetime. Who isn’t worthy of being the local dog catcher – much less the POTUS. Is HiLIARy your candidate?

And ail I see from you is typical Fake News, Rush, Drudge, Beck drivel, repeated over and over in right wing echo chambers. Blah, blah, blah. You people never discuss facts. You just throw out accusation you can’t prove. You never discuss policy, because you don’t know what the policy positions of the idiots you support are. Why, because they won’t tell you. If they tell you you may not vote for them (Mitt Romney),

As for the most corrupt politician, we have a lot of choices, and I don’t think there is any shortage among the ranks of the “corporations are people, money is speech, so show me the money” Party.

As for changing the subject; to you Repugnuts the point of this article is to bash Hillary Clinton, so that is the only thing that should be discussed. It is not changing the subject to explain why your little right wing talking points sound bite is stupid. You people are not only ignorant as hell, you are totally duped by these right wing echo chambers you live in.

As for who I will vote for. It will depend on whose running. But do I think Hillary Clinton is a better than Dubya’s Brother, the Canadian weasel from Texas, Ron Paul lite, Scott “yes sir Mr. Koch, whatever you say Mr. Koch” Walker; Marco Rubio, etc. etc. You bet I do. And I can discuss the policy reasons why. But with you Repugnuts, discussing policy is not an option. You prefer name calling, and I can do that too.

Hilary Clinton does know how to pull a ‘Watergate,’ with everybody knowing she shredded those ‘certain’ files that could land her without a political career. Brainwashed liberals are responsible for the idiocy that can only come from Amerikkkastahn.

Also, Marie Barf was right about you ‘loony leftist’ bitches. You can’t stay on the subject at hand. Marie Barf just listed (factual) unattractive qualities about your Royal Queen, and you still have the audacity to vote for the rotten bitch! You ‘loony leftist’ scum truly are something else. I await your response that will be filled with nothing more than idiotic and rehashed liberal jargon.

Hillary and Grahamnasty, a match made in Washington. LOL

A Hillary & Graham ticket would be puuuuurrrrfect!!!!!

We could wage war on the world while championing gay & lesbian rights. Reaching around/across the aisle would become common place. No more partisan bickering.

War and welfare could rise to new heights in the spirit of gay love & feminine masculinity.

We could change the national anthem to Freddie Mercury’s “We are the champions!” after their election.

Just when I thought a new scandal was not in the cards this week. You gotta appreciate the Clinton’s reach.

Remember ——– 1.5 Billion Dollars of YOUR Money was giving to Egypt’s Muslim Brotherhood by the Obama administration. Some of it most likely was funneled right back into the Clinton Foundation.

Remember THREE TRILLION dollars of your money disappeared into the desert of Iraq under Bush and Cheney. A significant portion just accidentally fell into the pockets of Halliburton, and most likely their former CEO.

Just like the bank robber accidentally pointed his gun at the teller and ran out with a bag of cash. Whoops!

What a load of crap. More rumor and innuendo from the far right rags. So now we are to believe that Hillary Clinton arranged for the sale of $66 million in weapons in exchange for a $250,000 speaking fee. You have to be kidding. This reminds me of Dr. Evil demanding one million dollars not to blow up the world in the first Austin Powers movie. You guys just can’t stop the blind hate. It has to be true its Hillary. She must have done something wrong.

Now on the other hand, Dick Cheney lands a no bid contract for Halliburton, whom he worked for and held significant stock in. They make SEVERAL BILLION dollars in WAR PROFITS which they hide in Dubai so they won’t have to pay US taxes on the money the taxpayers paid them and we are to believe that is a coincidence. Dick did nothing wrong. There is no reason to believe he profited along with Haliburton. You are totally ok with that. What dumbass hypocrites you are.

If the Clinton’s are corrupt, they need some Republican tutors on how to make money. You guys are a riot. Is this the best you got? What a total joke..

Jack, I’m right wing, but I agree with your first paragraph. There is nothing illegal about the use of tear gas for riot control. It’s not a weapon. It can be bought from many countries. Pepper spray is a type of tear gas. You can easily buy. Why do countries even have to get state department approval to buy it?

This is who controls the International Business Times.

Jack – you’re so funny. Ignorant as hell like most loony leftists but funny nonethless. Why can’t you stick to the subject at hand, which is Her Royal Majesty HiLIARy? You know…the entrenched, DC establishment, ultra supreme rich 1 percenter who hasn’t driven her own car in 20 years, won’t answer questions, lied at the coffins of the Benghazi victims about why they died, illegally kept a private email server while on the taxpayers dime and then deleted those emails when things got hot, the one responsible for the disastrous “Russian Reset,” and the one who granted favors to foreign governments in exchange for billions flowing into the coffers of the Clinton Slush Fund?

All I see from you is the typical Dumbocrat drivel: Koch brothers…blah, blah….Romney…blah blah…Fox News…blah blah blah. Tell me you’re going to pull the lever for the most incompetent, unqualified, dishonest, malfeasant, unserious, not genuine and untrustworthy candidate of my lifetime. Who isn’t worthy of being the local dog catcher – much less the POTUS. Is HiLIARy your candidate?

The brain really is a wonderful organ. It starts working the moment you are born and does not stop until you decide that you want to be a politician… .

comment deleted because it is offensive to “you will be busted”

In “the professional,” when the DEA guy realized he was up against a serious hit man, called the precinct and said “Send everyone.”

You would need chemical weapons to get the taste of Yoko’s pussy out your mouth.