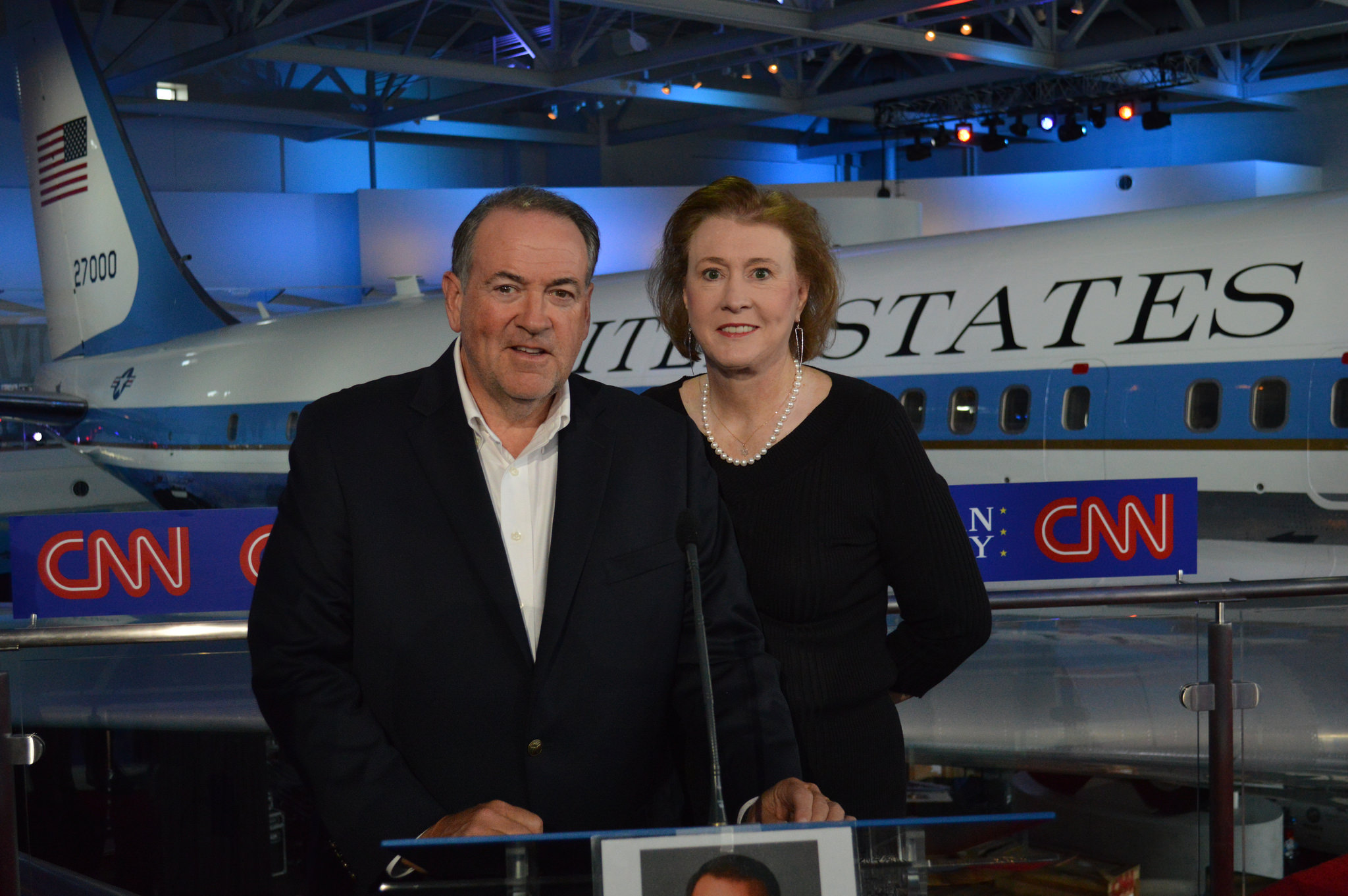 NOT EVEN IN BIBLE THUMPING SOUTH CAROLINA …

Of the 2016 presidential campaigns we don’t “get” (i.e. understand), former Arkansas governor Mike Huckabee‘s is at the top of the list.  Obviously we’re not fans of Huckabee, but we remain baffled as to his anemic showing in the 2016 presidential race – especially in early voting South Carolina where social conservatives dominate the GOP electorate.

Huckabee nearly won South Carolina in 2008, and as recently as February of this year he was polling in double digits in the Palmetto State according to aggregate data from Real Clear Politics.

Today?  Huckabee is supported by just 1.8 percent of South Carolinians …

That baffles us … not just because of Huckabee’s strong initial positioning, but because of the extent to which the 2016 “issues matrix” has played to his strong suits (and away from his weaknesses).

Seriously: The Planned Parenthood fetal body parts scam should have been a boon for Huckabee’s candidacy.  Especially in South Carolina.  Yet social conservatives here – and elsewhere – appear to be gravitating toward the campaign of U.S. Senator Ted Cruz instead.

And while Huckabee is not the most disappointing candidate of 2016 (that “honor” goes to U.S. Senator Rand Paul of Kentucky), his failure to launch nonetheless remains the most inexplicable.

After all, Paul’s unraveling can be fairly easily traced back to his embrace of the “Republican” establishment at a time when the GOP electorate was rebuking establishment politicians.

Anyway, in an effort to revive his Palmetto State fortunes Huckabee is dispatching his wife – Janet Huckabee – to South Carolina this week.

Courtesy of the Huckabee campaign, here’s a list of her stops …

At this point, each of those candidates is doing little more than embarrassing themselves …

Los Angeles Schools On Lockdown Due To “Credible Threat”

I would blame it on the Kim Davis episode. Parading that loon out in public like that and sharing a stage with her was political suicide. Republicans need to focus more on fiscal conservatism rather than social conservatism.

It is possible to focus on BOTH however I agree you can’t legislate morality.
IF the Republicans take the Trump message of securing the borders,NO Amnesty and taking a tough stance on immigration they WIN.

Trump has been able to tie the concerns of illegal immigration/Amnesty to jobs,crime and foreign policy.Democrats need a new voter base as middle America has rejected them and Amnesty for illegals after flooding our borders is how they hope to get there.

Rubio needs to heed Trumps message if he has ANY hope.

Rubio is pro-amnesty, so he would have to do a 180 to heed Trump’s message.

First, those here illegally must come forward and be registered. If they have committed serious crimes or have not been here long enough, they will have to leave. With the new E-Verify system in place, they are going to find it difficult to find a job in any case.

Second, those who qualify would be allowed to apply for a temporary nonimmigrant visa. To obtain it they will have to pay an application fee and a fine, undergo a background check and learn English. Once they receive this work permit, they would be allowed to work legally and travel. To keep it, they will have to pay taxes. They would not qualify for government programs like Obamacare, welfare or food stamps. And if they commit a crime while in this status, they would lose their permit.

Third and finally, those who qualify for a nonimmigrant visa will have to remain in this status for at least a decade. After that, they would be allowed to apply for permanent residency if they so choose. Many who qualify for this status will choose to remain in it indefinitely. But those who choose to seek permanent residency would have to do it the way anyone else would, not through any special pathway.

Yep. I think most people felt regardless of faith, she needed to do her job or quit. Especially when her outrageous salary (for poor Kentucky) was revealed.

Good point, social issues seem to be his focus. he may talk about other issues, national security, the economy, immigration, but it is just not registering. He has always been, even in past campaigns been a candidate that I never considered. Although he does seem like a nice guy.

Besides a bunch of mouthing off about it for years,what “fiscally conservative” things have Republicans done?

Aye…but like Satan’s silky hand extended to tempt Limbaugh with a twinkie…so doth evangelical rubes get drawn to culture wars like a moth to flame.

Unlikely. I think it’s more like he’s been doing nothing for like 10 years but running for president and being on Fox news.

Excellent read.Not sure any of them are ’embarrassing’ themselves EXCEPT Graham and Kasich HOWEVER after 7 years of the Muslim version of satan Obama and the destruction he has inflicted on this nations economy,foreign policy and social/cultural foundation- Biblical Christian/conservative Americans are gonna fly with ANYBODY that can win the White House and stop the bleeding.

They know Huckabee can’t get en there.

If you’re going to knock off Christie and Kasich, you need to include Carly too. Her poll numbers average out to 2.3. Lower than Christie’s and the same as Kasich’s.

I wonder how long poseurs such as Huckabee, Santorum and a few others would continue to run if they couldn’t do it on other people’s money? Remind me again? Who are the “takers?”

“Seriously: The Planned Parenthood fetal body parts scam should have been a boon for Huckabee’s candidacy. Especially in South Carolina.”

Hey tomstickler-how do you like your aborted babies-‘steam cooked’ like the agency PP in Ohio contracts with before they dump em in a local landfill OR ‘original and crispy’ like we saw in the PP videos?

What you wearing “Flip from Ohio” – kakis?

Well that’s a gross thought. But I guess at 9-mm it covers the stuff we don’t want to see.

I believe he’s threatening you. You should contact your attorney.

I have the IP address.

Don’t worry, where he has it holstered doesn’t make for a quick draw.

I hope you realize his new name is aimed at you? We don’t agree on a lot of stuff but it shouldn’t get personal like that. For that POS to think he represents common sense Conservatism is repulsive.

I thought I smelled a familiar odor behind that avatar.

No.Jesus just spoke to you.

Chris Christie pack it up?
Hells bells, he is going to be the GOP nominee.

If only he wouldn’t have fallen in love with Mohammed’s (USA) prophet.That fling exposed him.:)

The only person who will be on the debate stage tonight with many strong ties to Muslims is Donald Trump. Imagine the mudslinging and outrage if any other candidate running for President had the extensive business ties that he does with Muslims and Muslim countries.

That appears to be a bigoted comment.Not all Muslims are terrorists and it would be unfair to link law abiding citizens of the ideology of Islam and Barack Hussein Obama whose policies created ISIS.

Not all Muslims are terrorists? Somebody better tell Trump. He sure wants to treat them that way.

How so? Like Jimmy Carter and the Iranians he banned?
How about that,Carter bans Iranians and Obama gives em nukes.

Guess what? Iran is a country that held our people hostage for nearly 15 months. Carter had clear justification.

When you can tell me what Muslims in Canada, the Phillipines, Indonesia (which has a larger population of Muslims than any other country), and our NATO ally Turkey have done to deserve being barred from the United States, get back to me. Until then, away with you and your fallacies.

Not to mention that approximately 10% of physicians in the US are Muslim……I heard Joe Scarborough mention that today on “Morning Joe” (in midst of my daily routine of eyeballing Mika…)
I’d venture to guess that’s probably behind Christian, Jewish, & Hindu
So more than likely a solid 4th place…………

Uhmmm, “It’s the economy Stoopid”, followed closely by how “jacked up” Washington is, immigration and terrorism. The “Huckster” hasn’t staked out any significant positions on any of those issues.

Surprise! Surprise! FITS calls them Bible Thumpers and then is baffled about why he doesn’t understand them.

It is very difficult to get recent demographic data on Social Conservatives, because of a acedemic bias. Their biases lead them to identify uneducated people as social conservatives.

Lacking any definitive data, I offer my own observations on Social Conservatives.

I think your observations have a lot of merit.

And that photo is the closest he will ever get to Air Force One in his life.

Huckabee was never a serious candidate, not even in his previous 2 runs. It was always about making money. And, it got preacher man a Florida mansion.
Add Santorum and Trump to those listed in the link above and you will have the GOP’s Professional Presidential Candidate cadre for 2016.
These are the people who run for president to publicize books and their availability for speeches right after they ‘suspend’ their campaigns. And, there are personal expenses that become campaign expenses when they’re running.
Alan Keyes got away with doing this for a few cycles. I guess Mike and Rick thought they could do it at least as many times.
You thought Hillary made the big bucks from the speechifying? Trump made ‘hundreds of thousands’ per, too.
Like the GOP consultants and the TEA Party super PACS that raise money and never spend it on anything but staff salaries, it’s just a racket.

Let us not forget that Mikey has the blood of four Washington (state) police officers in his hands, as well as the sexual assault of a young girl for insisting on the early release of Maurice Clemmons. If that isn’t disgusting enough, Mikey’s campaign has also tried to blame his dismal record of releasing dangerous criminals in the past on prosecutors. Check out the article below.

Also note the blather released by his campaign near the top and noted elsewhere in the brief article where they tout his “strong support” of Law Enforcement. I thought it wasn’t “Christian” to lie.

The lame excuses Mikey and his crew give for him releasing dangerous criminals are almost laughable, if not for the dsngerous and deadly consequences to innocent citizens. Saying thst the prosecutors should have “done a better job” when pushing for early release in some cases and then signing to release them makes about as much sense as a prison guard going bonkers and turning prisoners loose on the streets, then blaming the makers of the locks because it wasn’t harder for him to turn the keys.

How anyone could seriously consider the POS Huckabee for any office is beyond me. A more lengthy article details even more of Huckabee’s love of violent criminals and his apparent disdain for innocent citizens and their lives.

This is another example of FITS’ “pay for play.” The Cruz people hold Huckabee as their second choice, so it’s beneficial to denigrate Huckabee. The Cruz campaign is probably paying Will to badmouth Huckabee to that end. Much like Kirkman Finlay had Will on the payroll to promote him as a gubernatorial candidate in 2018.