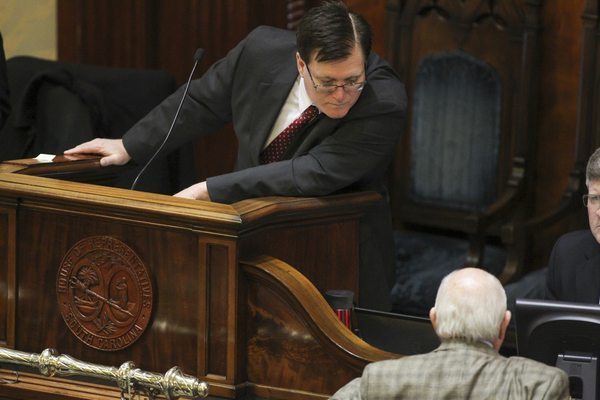 South Carolina’s “Republican” House caucus – badly splintered during the debate over the Confederate flag – once again finds itself in the midst of a major power struggle.

Warring factions are “at each others’ throats,” one lawmaker told us – with fiscally liberal S.C. Speaker of the House Jay Lucas and “Republican” majority leader Bruce Bannister struggling to hold on to power.

Bannister nearly lost his job back in March after a chaotic budget process left lawmakers badly exposed over a controversial borrowing provision.  Meanwhile Lucas’ mishandling of the flag debate created an open rebellion in his ranks – one his powerful enemies are looking to support.

In fact the two legislative leaders are reportedly being “stalked” by lawmakers loyal to S.C. Rep. Rick Quinn – crown prince of an influential neo-Confederate consulting empire that makes millions of dollars off state government.

Meanwhile another battle front has opened involving S.C. Rep. Kirkman Finlay – who was on the receiving end of this website’s ire earlier this week.

According to our sources, Finlay was targeted by a pair of consultants who work for the House GOP Caucus.  The consultants were reportedly miffed that rival politicos loosely affiliated with Finlay were “moving in on their turf.”

“The more the GOP is divided, the more they dictate terms,” one frustrated GOP House member told us.

Are things likely to get better?

With a wave of new money coming into Columbia, S.C. this year … and with filing for primary elections looming … we suspect the infighting will only intensify.  In other words, what is already a petty, corrupt and dysfunctional chamber could become increasingly so in the months to come.

The Wrath Of Hugh Leatherman