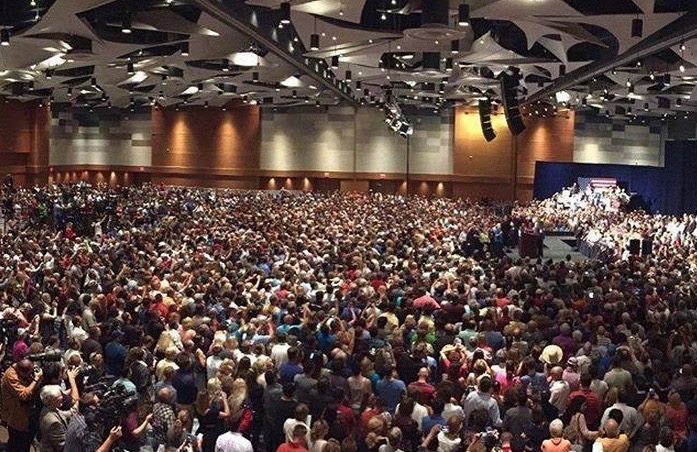 RUNNING FOR PRESIDENT IN “DUMBED DOWN” AMERICA

There’s a fascinating article in The Boston Globe this week highlighting how the 2016 presidential candidates are communicating with American voters.

The takeaway?  Simpler is better.

“The Globe reviewed the language used by 19 presidential candidates, Democrats and Republicans, in speeches announcing their campaigns for the 2016 presidential election,” reporter Matt Viser wrote.  “The review, using a common algorithm called the Flesch-Kincaid readability test that crunches word choice and sentence structure and spits out grade-level rankings, produced some striking results.”

Among “Republican” candidates, the Globe review found that GOP frontrunner Donald Trump‘s announcement speech was simple enough to be understood by a fourth-grader.  Meanwhile the announcement speech of former Virginia governor Jim Gilmore – who is barely registering as a blip on the national radar – required a tenth-grade education.  Same with former Arkansas governor Mike Huckabee – another “Republican” whose 2016 bid is going nowhere.

Establishment GOP favorite Jeb Bush?  His speech was on an eighth-grade level – roughly the same as Democratic frontrunner Hillary Clinton.

Ben Carson – the retired neurosurgeon currently running in second place in the GOP field – gave an announcement speech at a sixth-grade level.

(To read the Globe article in its entirety and see where your candidate of choice stacked up, click here).

Obviously no one is going to lose political points by simplifying their message so that it can be understood by a broader number of people.  Thanks to an effective government monopoly on education, Americans are getting dumber by the day – and they’re also more distracted than ever.

In other words it’s smart to dumb down – and obviously no one is going to argue that Trump (a billionaire) and Carson (a brain surgeon) aren’t smart people.

Of course it’s important for simplicity to say something …

“Ten-word answers can kill you in political campaigns,” fictional president Jed Bartlet said to his GOP opponent during a presidential debate on The West Wing. “They’re the tip of the sword. Here’s my question: What are the next ten words of your answer? Your taxes are too high? So are mine. Give me the next ten words. How are we going to do it? Give me ten after that, I’ll drop out of the race right now.”

Answers to those questions will tell a voter everything they need to know about a candidate for any office – at any level of government.

Bottom line?  Voters should certainly listen to the words a candidate speaks … but it’s far more important to the future of their country that they be able to count.

We know…Everybody is stupid, except for FITSNews, RonPaul, Thomas Ravenel and Tom Ervin…You have ALL the answers, and everyone else is oblivious…

And you are embraced – by the voters – according to your level of intelligence…right? (:

Mirror mirror on the wall, who is the dumbest one of all?

Why you, of course, GrandTango!

Left out Boz.Neither one has ever supported a winning political candidate that I have seen(unless you count supporting a candidate after the votes are counted aka “vicupstate”) while claiming not to be Democrats but supporting most platforms of that evil party. :) “swervin” Ervin was the all time FitsNews dandy -coming in at <1% after spending millions of his own money.

I do give Fits credit for the stand on life issues.I do believe them to be sincere.

Actually flip, I thank FITS (Sanford) for providing a forum for local/state politics…

The content I can do without, it was much better on SCPD….but FITS is enough like the liberals, that they will follow him, and his site. And that gives us a launching pad to take them down…and I just love that.

They crap their pants a lot because they have no idea what hit them. They are not used to getting slapped down.

Interesting post.We all know the only reason you post here is because SCPD was a miserable failure! Just like YOU GrandTango! LMAO!!!

And SCPD income couldn’t even make the first payment on an Obamacare policy.

He had to much character to become a deadbeat tax cheat like you and accept a welfare Obamacare subsidy like you did for your Non Citizen mother in law?

My guess is GT plays by the rules.

Good points.Although they outnumber us 10-1 they are easy to defeat intellectually.NON of them ever think ‘outside the box’ of failed liberalism and they are more interested in stealing screen names and personal attacks than debating issues.

“NON”?…..I think you need a spelling lesson, you ignorant neo-con.

“Neither one has ever supported a winning political candidate”

Why is this a problem? What have the “winning” candidates of each cycle brought us other than war & debt for the last 100 years?

There are no “winners” in politics as far as the voters go, they lose every time.

Even though you think I should go someplace worse, I’m glad you don’t deny my statement.

Why don’t you move to Iran instead? You seem to like setting the bar low.

I submit they support Obama, and he won, sadly. And he is the WORST, most-dangerous, anti -freedom, anti-American US elected official in my lifetime.

I also contend: Their support of Obama – and the disaster he has made of our country – is an indication of their wisdom, and ability to pick leaders.

Don’t know the answer to that, but my dog is smarter than Tango !