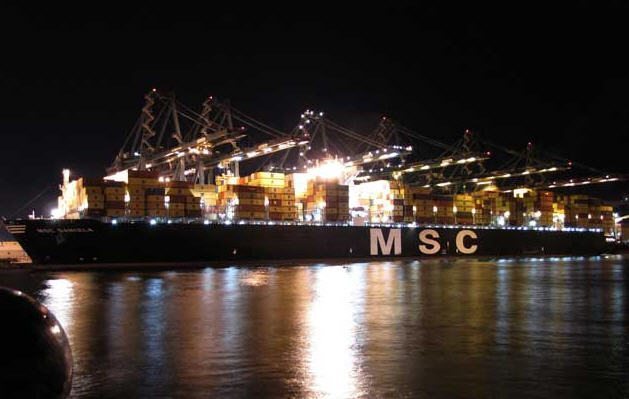 IS IT EVERYTHING TAXPAYERS PAID FOR?

We’ve gotten quite the response from our recent post suggesting that the dredging of Charleston Harbor to a depth of fifty-two feet won’t create the competitive advantages port officials promised.

Another reason the critics may be right?  As it turns out, many of the new mega-container ships (a.k.a. “Post Panamax” ships – or ships built in the aftermath of the re-engineered Panama Canal) aren’t necessarily going to require deeper ports …

In fact the design, construction, and deployment of new wide body shallow draft container vessels – coupled with overcapacity in the shipping industry and the deepening of rival shipping channels – means this government-funded dredging project may not wind up providing Charleston with any competitive advantages over Savannah.

And yes, we supported this $300 million dredging project – although we made clear at the time “we don’t believe government should be in the port management business … or the harbor dredging business. Particularly not here in South Carolina, where institutional corruption is generally exceeded only by institutional incompetence.”

Why did we support the project, then?  Because at the time S.C. governor Nikki Haley‘s “Savannah River Sellout” was in full swing – placing our state at a severe competitive disadvantage.  And because, as we wrote, “if $300 million worth of state tax money is going to be blown on something, we’d rather it go toward an expense that has a measurably positive outcome as opposed to a measurably negative one.”

But the questions now loom large: Are the “measurably positive outcomes” legislative leaders and port officials promised us three years ago really all that measurable?  Or all that positive?

The recent voyage of a ship called the MSC Daniela illustrates a potential hole in the government’s theory.

The world’s largest container ship until recently, MSC Daniela arrived in Los Angeles from Xiamen, China late last month drafting 9.7028 meters (we double-checked).  Reportedly, this V-hulled vessel has a design draft of 14.9352 meters and has a slot capacity of 14,000 TEUs.  Those are “twenty-foot equivalent units,” or the standard containers used in the shipping industry.

And again, we double-checked those numbers …

Due to overcapacity on Asia-to-American shipping routes – and because even the most efficient U.S. ports are not designed to handle fully-loaded ships of this size – they rarely call on America.  And when they do call, they are usually “light-loaded” – which defeats the purpose of building a mega-ship in the first place.

These vessels are “purpose built” – engineered to access shallow waters and to maximize capacity by widening their beams to take advantage of the wider locks of the expanded Panama Canal rather than increasing their TEU capacities by increasing their drafts.

Look specifically at the Susan Maersk – which was the design vessel for the Cooper River Dredging project.  The other vessels – though similar in terms of both weight capacity and TEU slot capacity – have design drafts of 2.6 meters to 1.0 meters less than the Susan Maersk.  Of the vessels on the list, only the Evergreen L-Type ships and the OOCL Taipei and her sister ships are deployed to the east coast – and they generally arrive and depart drawing around 42 feet of water.

In other words, these vessels have been built to accommodate Charleston Harbor as it is today … not after this massive taxpayer investment.

Our prediction?  Most of the vessels listed above will be far busier during the Post-Panamax era than the MSC Daniela.  In fact, it’s not a stretch to predict that ports designed to efficiently service the vessels on the above list will be more profitable than those ports dredging channels in the hopes of accommodating the fully-loaded MSC Daniela.

“Dredging deeper in Charleston will make some folks very rich, but it will not either increase the efficiency of the S.C. State Ports Authority container terminals or prevent other ports from taking business from Charleston,” one port expert told us.

Anyway, stay tuned.  We’ve been slack on our coverage of South Carolina’s port system over the last year, but the sketchy math associated with this project – to say nothing of the ongoing failure of this bureaucracy to take advantage of our competitive assets – is troubling.

And we intend to step up our efforts to expose it …

We believe government should continue to maintain public ownership of critical infrastructure – like our ports.  But for the better part of the last decade we have repeatedly argued that private investment (and management) of these facilities was a far better method of maximizing competitive advantage.

Legislative leaders and port officials didn’t listen to us, though … and as a result our assets have gone undeveloped and underutilized.

Props for an in-depth (no pun) analysis on this.

Ha! Props to you for “going deep” w/ your pun skillz.

I pasted an article in your previous post on the port deepening in which your expert completely contradicts his statements to fits.
He claims in the article published this year that Charleston will gain a competitive advantage. I also give possible conflicts of interest of this expert. See my post at this link.
https://www.fitsnews.com/2015/10/19/port-expert-new-charleston-depth-wont-ensure-competitiveness/

Hey, wait, Climate Change/sea level rise will take care of all this for us. Screw it, don’t do it!

And we’ll have a gay mayor – hurray. Did you get my joke on the other thread – she’s “south” of broad? I’m so childish.

South of Broad, you mean down by the Y?

Yeah. She’s hits the bars at Meeting and Queen!!! Her toys require her to live on The Battery?

They spend it like ware. Pun intended.
Spend the money on i26.
Better to be a profitable regional port than an unprofitable national wanna be,

“However, Charleston’s rail and road deficiencies make it unlikely that these vessels will skip Savannah in favor of Charleston.”
So which is it? Other Folks’ articles bemoan that too much road money goes to Charleston. Now he says Charleston roads are deficient.