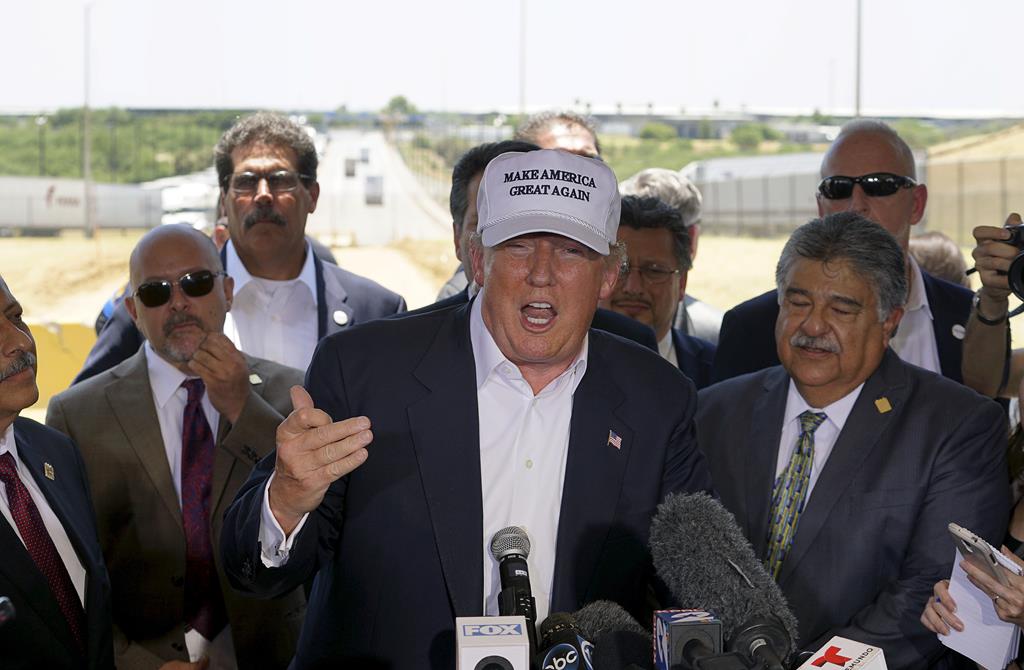 PROPOSALS DRAW “LINE IN THE SAND” ON ISSUE

|| By FITSNEWS || Billionaire real estate mogul Donald Trump doesn’t just want to build a wall on America’s border with Mexico … he wants to make Mexico pay for it.

“The Mexican government has taken the United States to the cleaners,” he said. “They are responsible for this problem, and they must help pay to clean it up.”

How’s that for keeping an eye on the the bottom line?

And that’s just the beginning of Trump’s bid to fundamentally redefine an issue he has single-handedly brought to the forefront of the 2016 presidential debate.

In addition to a wall subsidized by Mexico, Trump wants to deport all undocumented immigrants, rescind U.S. president Barack Obama‘s executive amnesty program, triple the number of Immigration and Customs Enforcement (ICE) agents in America and revert to the tariff system that existed prior to the passage of the 1994 North American Free Trade Agreement (NAFTA).

Furthermore he would end the practice of granting U.S. citizenship to the children of illegal immigrants.  “Sanctuary Cities” would also be defunded and green cards to foreign workers would be suspended.

Trump would also require immigrants to prove they won’t be a drain on their new country.

“Applicants for entry to the United States should be required to certify that they can pay for their own housing, healthcare and other needs before coming to the U.S.,” he said.

Trump’s far-ranging immigration proposals – released on Sunday – aren’t just comprehensive, they represent a sweeping repudiation of the “bipartisan” approach to the issue that’s been en vogue in Washington, D.C. for decades.

As we noted last month, Trump has turned what was supposed to be a politically correct “Republican” outreach to Latino voters into a blunt, politically incorrect rebuke of the broad, bipartisan failure to secure the nation’s border.  He’s also feeding off the frustration arising from the GOP’s latest ideological betrayal on this issue.

This website has never breathed fire on the immigration issue, but we’ve consistently called for government to appropriate more resources to border security.

Trump’s plan obviously does that … and pays for itself, too.

Beyond border security, Trump said his proposals are built on the need to enforce existing laws and to “improve jobs, wages and security” for all Americans.

Hard to argue with either of those points …

In fact we don’t see any universe in which Trump’s “line in the sand” on immigration reform doesn’t further bolster his already front-running GOP candidacy, and force his would-be rivals to toe that line … or risk being identified with the failed D.C. status quo.

Speaking of the status quo, it will be interesting to see how it responds to Trump’s immigration agenda – seeing as its initial effort to take him out has failed miserably.