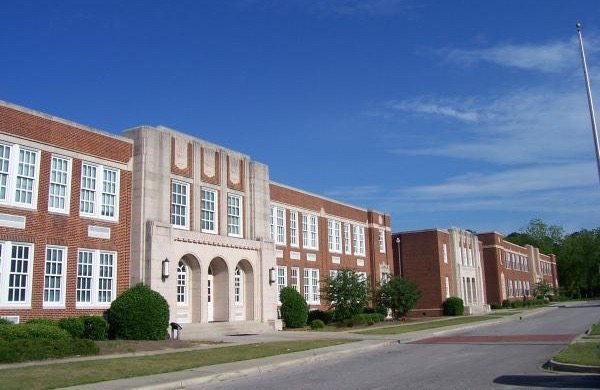 || By FITSNEWS || Those who say billionaire mogul Donald Trump isn’t running a substantive campaign in his bid for the 2016 “Republican” presidential nomination obviously haven’t seen his immigration proposals.

Agree or disagree … Trump has rolled out specifics.  Not only that, he’s offered up a way to pay for his plan (imagine that).

(For our reporting on Trump’s proposed immigration reforms, click here).

Obviously the immigration issue is big in early-voting South Carolina – where Trump is currently enjoying a 3-to-1 lead over his nearest rival.  In fact we exclusively reported earlier this year on a controversial “resettlement” program in the socially conservative Upstate region of the Palmetto State.

Of interest in this ongoing debate?  A recent report we were forwarded from WLTX TV-19 (CBS – Columbia, S.C.).

“Wednesday is the first day of teacher orientation for Brookland Cayce High School,” the report began.  “Among the new teachers is one the school hopes will help with an increase in immigrant students.”

A couple weeks ago, we told you the story of 15 new immigrant students attending Brookland Cayce High School. They’re a part of the wave of children that came from Central America without parents or relatives, fleeing dangerous circumstances in their home country.

Last year, the school wasn’t quite ready for them. Now, there will be two teachers focusing on students who speak English as a second language.  The school also added a new class that’s completely in Spanish.

Far be it from us to be insensitive to the dangers faced by children in Central America, but last time we checked there were plenty of dangers facing children in the Palmetto State.

Also, it sounds like the education of these children (to the extent government-run schools in the Palmetto State “educate” anybody) is creating new demands on this particular school – which the school is responding to by adding positions and programs.

Look: We’ve said it before and we’ll say it again, but there is a point at which the inflow of immigrations – based on a porous border or “Christian compassion” – has to stop.

“Faith-based compassion is a wonderful thing, but just as one’s religious beliefs shouldn’t be imposed on another without consent … neither should taxpayer obligations based on those beliefs,” we wrote recently.

Thad Viers Won’t Be Sentenced This Week After All …

A significant portion of the student body at Brooklyn Cacye struggles to speak standard English as it is.

Says the guy who can’t spell “Cayce”…
And just what is “standard English”?

As for standard English: : “…the English that with respect to spelling, grammar, pronunciation, and vocabulary is substantially uniform though not devoid of regional differences, that is well established by usage in the formal and informal speech and writing of the educated, and that is widely recognized as acceptable wherever English is spoken and understood…”

You know that was rhetorical, right?

Sure, but you do raise a valid point. This other doofus on the other hand…

If you knew it was rhetorical, you would have known that an response wasn’t necessary. Better crack those books…

Mark – the fact that you have asked a rhetorical question doesn’t mean you shouldn’t expect an answer. This is FitsNews and I was bored…

You are the ULTIMATE Dumbass. You attacked the kids at Brookland-Cayce for not being able to speak. Yet, you cannot get even one part of the school’s name correct. Idiot.

I think it’s stupid motherfuckers, LIKE YOU, bashing our schools, not the students, that are the problem.

Whatever dude, I spend about 100 days a year in “our schools” recruiting and teaching. I also have a tablet that thinks it spells better than I do so I’ll take the hit for not proof reading but my point still stands – Brookland Cayce is having these kids dumped on them and the kids there could have used a couple of additional teachers without the ESL crowd.

Oooh, typos. You sure called him out on his typos. I guess that will have to do since you have no real argument against his points.

His “point” is related to words. You’re as fucking stupid as he is. And you probably bash our students, just like that ignorant liberal MoFo.

Oooookay. Sorry GT. I thought I was arguing with a new tard on the block. Only you would call The Colonel “liberal”.
As you were…

It’s very amusing that you liberals are so insulated by the people controlling you, that you are buried in your belief only one, or maybe two people, of a group can see you for what you are.

Remember, you lose elections in S.C. by 30% to 40% margins regularly. So a large majority see you as ignorant and lacking judgement. And it’s the FITSNews intelligence on the losing side.

I’ll admit GT is very skilled in articulating who you are, even for those who don’t know it themselves. And that’s likely why you are so confused and lost so often. People like GT just point it out. And there are many more of the GTs than there are you. If not, the whole state would be a cesspool, instead of just the backward areas that vote Democrat.

When you refer to this “we” being “legion”, are you just referring to the voices in your head or the multiple names you use when you post?

No dipshit, my point is that BC has significant work to do with the students who rightfully attend the school. Adding to the burden with an ESL program is criminal. BC has already seen falling scores 2013-2014 and is rated as “at risk” for next year. While their graduation rate is actually quite good, their test scores are abysmal. https://ed.sc.gov/data/report-cards/2014/district.cfm?ID=3202

But the POINT is, where are YOU regarding intellectual accuracy (as a judge,) when you cannot even get one of the two names of the school right?

Before you run your mouth, pointing out their deficiencies, it may be a good idea to check yourself, lest you look stupid. And you do.

I’m not willing anything back, in fact, I provided unequivocal evidence of the veracity of my original assertion.

I am with you. Pricks equate a hastily typed post with a doctoral thesis. Don’t take them seriously, no one else does.

You are correct in that schools, especially those with shrinking populations and declining economic base such as BC have enough problems without having the feds drop these kids into the scene.

I have granted the missspelling of the word Cacye, what other word did I get wrong?

CIC and The Colonel are two of the most thoughtful, mostly conservative voices on this forum.

GrandTango and Flip hates their guts and calls them socialists.

Everyone stop and think about that for a second.

How long will it be before the stupid element of the GOP drives off the more intelligent ones?

Will FlipTango Republicans take over the GOP?

A ton of federal money will follow those kids. Educators, realtors, etc will be scrapping for it and begging for more.

All this perverted stuff is incentivized by the Feds, either outright or by tax policy. Either way, it is your leaders screwing you to the wall and making you pay for it.

How much is Trump paying you to work his name into every. damn. article?

At least these kids are going to school. What else could they be doing?? Living on the street and engaging in criminal activity, or finding a way to live even more off of government welfare. Frankly, I don’t have a problem with this school or the school system where this school is located accommodating these children and passing off some “educatlon” to them. I understand that English is a second language although they should learn how to speak English as part of their curriculum. I suspect that if these students were from China, Japan or India there would be no problem whatsoever accommodating them.

Are any of them hot?

Maybe the private schools can give these kids scholarships….I’m sure they’ll do a superior job…

Why should anyone GIVE the students you’re PAID to educate anything? The Government robs us blind to teach them.

You are a selfish and GREEDY liberal to suggest that responsible people GIVE their services away, after you have failed, and failed again, spending our Billions, to do it. You Dumbass.

And speaking of FITSNews ignorance of sports….bet this will be avoided like FITSNews is running from Hillary’s, and the Democrat Party’s, collapse.

You’re fixated on Trump, and they Ds are talking about pulling AlGore out of the trash heap, for a run. How funny is that? (;

Tim Tebow threw for 69 yards and ran for a touchdown in his first game in two years, as the Philadelphia Eagles beat the Indianapolis Colts 36-10 Sunday.

Tebow got a standing ovation when he entered midway through the third quarter and the crowd roared so loud when his name was introduced he had to quiet them down because he was taking the snap in a shotgun.

“It’s very humbling, a blessing. I appreciated it,” Tebow said.

No, your leftwing BIGOTRY is what is scandalous.

Key words being “when he entered midway through the third quarter” in a pre-season game.

That being said, I think your crush on Tebow is adorable, GT.

The fact that he is getting a chance to slap you hateful bastards upside the head, is thrilling me.

Can you imagine if he wins at Philly like he did at Denver? You all look like the racist, Christian-hating Bigots you are.

And I bet you’ll shit your pants, like the ass-backward Dumbass you are.

I didn’t know you were the smartest NFL scout, and all the other teams were staffed with idiots.

Did you know that Tebow took over a 1-7 Denver team as QB, and went 8-1, beating the Pittsburgh Steelers in the Playoffs?

Yeah, I know he did. And how did he do after that? What was in completion percentage? INTS to TDs? 2011 results for Timmy – “he finished the season with the lowest passing completion rate in the NFL”

If Tebow was a gay muslim that broke his prayer rug out into the end zone after a TD the liberals like mamatiger92 would love him.

He is a Christian so they hate him.

BINGO. It’s why they hate that Philly loves him.

He has crappy passing mechanics and poor QB performance. But that said, I didn’t see him pass this past weekend, so I don’t know if he’s fixed his mechanics. I do know he’s a big guy, saw him in person at the Ft. Lauderdale airport this summer.

These new kids will most likely increase B-C’s overall GPA. Not sure that teaching in Spanish is the way to go.

As someone that graduated from BCHS half a lifetime ago, even though I didn’t have another experience to compare it to, I thought it was a good school and looking back I enjoyed my time there. It had a good mix of people that helped me learn how to relate to people from different backgrounds and the general ambiance there was a positive one. Except for maybe that one little campus wide race riot that the SWAT teams had to come break up, back in ’93 I believe hahaha!

Ummmm…Kemosabe…this the same Will Folks who embraces RINO
Jeb and now tells us we can’t afford illegal immigration?

Why yes, Tonto—he IS don’tcha know—ranking him with Diamond
Jim and T-Bone as the most corrupt liars in the nation !!!