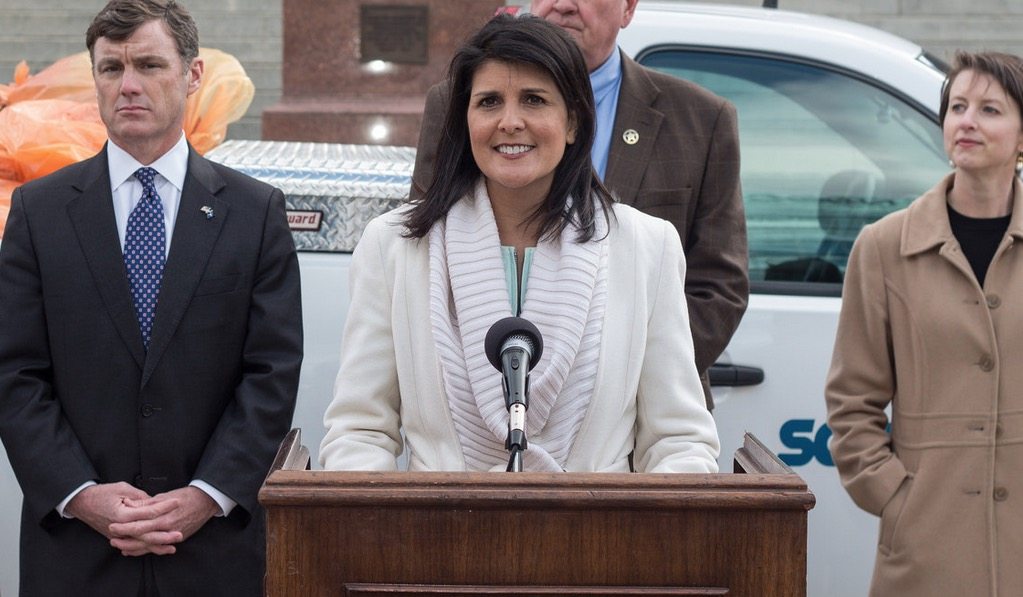 || By FITSNEWS || S.C. governor Nikki Haley is working overtime to find a new job for the live-in girlfriend of her longtime press secretary, Rob Godfrey.

If that move doesn’t “take,” Haley will reportedly try to place the troubled employee in a position with one of her political donors.

Shuster’s abrupt departure from SCDHEC should come as no surprise to our readers.  As we noted in this report, the agency basically collapsed earlier this year when Shuster took over in the aftermath of former director Catherine Templeton‘s departure.

“SCDHEC – which three months ago was among the most well-run, widely respected agencies in government – is clearly a powder keg at the moment,” we wrote at the time, and most of the combustibility was reportedly due to Shuster’s increasingly erratic interpersonal behavior.

In fact we’re told Shuster’s reign of terror created a royal mess for new director Catherine Heigel – who took over the agency in June after Haley’s first choice, Eleanor Kitzman, was forced to withdraw her name from consideration.

From our report back in March …

“(Shuster) was always a serious problem but (Templeton) managed to keep her contained,” one source told us.  “Now she’s out of the cage, running wild – and running more and more of us away with each day that goes by.”

In fact a source who recently resigned from SCDHEC tells FITS the exodus of staff at the agency has picked up steam (and reportedly extended to professional, non-political ranks) as Shuster seeks to impose her will on subordinates.

In addition to being ineffective, these efforts are of dubious legality in light of the vacuum of duly appointed executive authority at the agency.

“There is no one with the authority to do anything over there – creating some real difficulties legislatively,” one source familiar with the drama told FITS.

Shuster is claiming this authority as her own, though – citing her history with the governor.

“She is invoking Nikki’s name left and right,” one source said.  “She is telling everyone she is protected by Nikki – that Nikki will back her no matter what.”

Shuster worked on Haley’s 2010 campaign and briefly served as the governor’s budget director prior to being dispatched to SCDHEC to mitigate the fallout from the “Savannah River Sellout” scandal.

She stayed at the agency, though, ostensibly to track the political ascendency of Templeton – who took over at SCDHEC in the aftermath of the scandal, streamlining the antiquated bureaucracy and saving taxpayers millions of dollars.

Of course Haley’s real reason for leaving Shuster in place may have had nothing to do with keeping eyes on Templeton.

“Nikki never wanted (Shuster) back,” a source close to the governor told us. “She still doesn’t want her back.  But she is obligated to (Godfrey) to find her a job.”

FITS heard multiple horror stories about Shuster – who was reportedly single-handedly responsible for the resignation of at least ten health officials at SCDHEC.

“They simply couldn’t work with her,” one agency source told us. “At least ten employees who directly reported to her in health leadership left, leaving Heigel with a mess when she came in.”

Two former SCDHEC employees recalled the story of an Afghan War veteran who informed them he’d rather go do another tour of combat duty than work another day for Shuster.  They also told us of a S.C. State Law Enforcement Division (SLED) employee who was briefly dispatched to SCDHEC but returned in short order after Shuster rendered him “combat inoperable.”

Where will Shuster land?  And who will be on the hook for her salary?  We’ll let you know when we know …

“National Nikki” Is Back