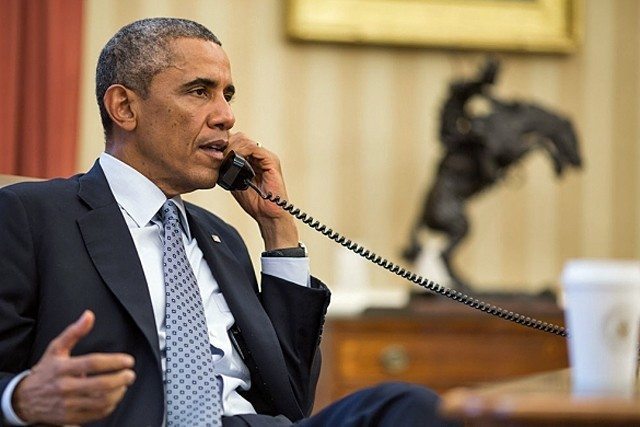 || By FITSNEWS || U.S. President Barack Obama says he’s reached a deal with Iran which will keep the Middle Eastern Muslim nation from developing a nuclear weapon …

“After two years of negotiation the United States together with the international community has achieved something that decades of animosity has not: a comprehensive long-term deal with Iran that will prevent it from obtaining a nuclear weapon,” Obama said.

“This deal is not built on trust. It’s built on verification,” Obama added.

Critics of the agreement ridiculed his claims.

“The Obama Administration entered negotiations with the goal of dismantling at least some Iran’s nuclear facilities,” former U.S. Senator and Heritage Foundation president Jim DeMint said.  “But the only things this agreement dismantles are the economic sanctions that have restrained the regime’s nuclear program. Under this deal, Iran’s vast nuclear infrastructure remains largely intact. Moreover, the ‘freeze’ on uranium enrichment is both temporary and partial.  That’s not a freeze; it’s a slight chill at best.”

“The Obama Iranian deal makes proliferation in the region inevitable and, as a result, war more likely, not less,” said Rick Manning, president of Americans for Limited Government. “Nuclear non-proliferation, U.S. interests, and our allies’ interests have all suffered a severe setback today.  It makes it much more likely that we will have a nuclear terrorist attack on U.S. soil, and that we will face a new reality as Iranian allies like Venezuela become nuclear threats.  The world is less safe, and if Congress fails to defeat this deal, they will have nobody but themselves to blame.”

There was also uniform opposition to Obama’s deal among “Republican” presidential candidates – at both ends of the GOP’s ideological spectrum.

On the right, U.S. Senator Ted Cruz of Texas called the agreement “a staggeringly bad deal” and a “fundamental betrayal of the security of the United States and of our closest allies.”

“The international community led by the United States has agreed to not only legitimize and perpetuate the Iranian nuclear program, but also to further arm and enrich the brutal theocratic regime that has oppressed the Iranian people for more than thirty years – a regime that is wrongfully holding United States citizens captive, that is sponsoring radical Islamic terrorism across the globe, and that regularly promotes the destruction of both Israel and America throughout its streets,” Cruz added.

On the left, former New York governor George Pataki referred to the agreement as “a colossal catastrophic capstone to the failed Obama-Clinton foreign policy.”

“Rewarding the world’s leading sponsor of state terror with billions in funds and the currency of legitimacy is as dumbfounding as it is dangerous,” Pataki added. “The accord makes the region and the world less safe and poses an unacceptable threat to our allies and friends especially Israel.”

Trump also rebuked the provision of the deal which gives Iran a two-week window before opening certain facilities to inspection – saying the United States should have insisted on a twenty-four hour rule.

Meanwhile Jeb Bush – the establishment GOP frontrunner and a frequent critic of the Iranian regime – described the agreement as “dangerous, deeply flawed, and short sighted.”

“The clerical leaders in Tehran routinely preach  ‘death to America’ and ‘death to Israel’ – and through their acts of terror, they mean it,” he said.  “We must take these threats seriously and should not base any agreements on the hope their behavior will moderate over time.  The people of Iran, the region, Israel, America, and the world deserve better than a deal that consolidates the grip on power of the violent revolutionary clerics who rule Tehran with an iron fist.”

“This isn’t diplomacy – it is appeasement,” Bush added.

This website has never bought into the Iran scaremongering.  Nor do we especially give a damn what happens to Israel – a nation which continues to bark orders at the United States (even though it relies upon U.S. taxpayers to subsidize its wars of aggression).

We can’t afford to intervene all over the planet.  And even if we could, such intervention isn’t making us safer.

Of course that doesn’t mean we support giving billions of dollars to nations which are openly hostile to America and its interests.

In fact of all the reactions to this deal, Iran’s is the most telling.

“Negotiators have reached a good agreement and I announce to our people that our prayers have come true,” Iranian president Hassan Rouhani said.