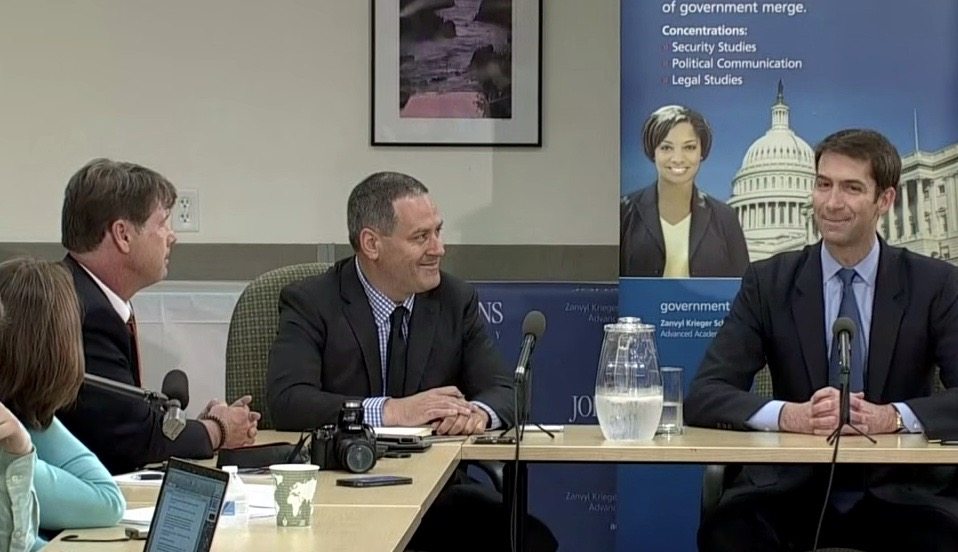 WARMONGER PUT ON THE SPOT …

|| By FITSNEWS || This website has written previously on U.S. Senator Tom Cotton of Arkansas, the heir apparent to elder “statesmen” Lindsey Graham and John McCain when it comes to reflexively hawking the foreign policy propaganda of the American military industrial complex.

Cotton doesn’t care that America’s hypocritical, interventionist foreign policy helped create the Islamic State in Iraq and Syria (ISIS) … or that our latest effort to battle this manufactured enemy is bankrupting our country.

All he cares about is keeping the contracts moving …

Anyway, in an exchange you’ll want to watch Cotton was absolutely schooled earlier this month by Fred Boenig – a radio host in Pennsylvania whose son died in Afghanistan in 2010 (and who has three other children serving in the U.S. military).

Boeing asked Cotton – bluntly – when America’s engagement in Afghanistan would be over.

“When do we get to hang up the ‘Mission Accomplished’ banner and when do I get my kids to come home safe again?” he asked.  “That’s the only thing that matters to me.”

“There’s no definite answer because our enemies get a vote in this process. I’m deeply sorrowful for your loss and I greatly honor the service that all of your children have rendered, like all of our veterans do,” Cotton responded.

“But in the end the best way to honor our veterans … ” he continued.

“Is to have more killed?” interrupted Boenig.

“ … is to win the wars in which they’ve fought,” Cotton finished.

Props to Boenig. This is precisely the sort of questioning our leaders need to be subjected to …