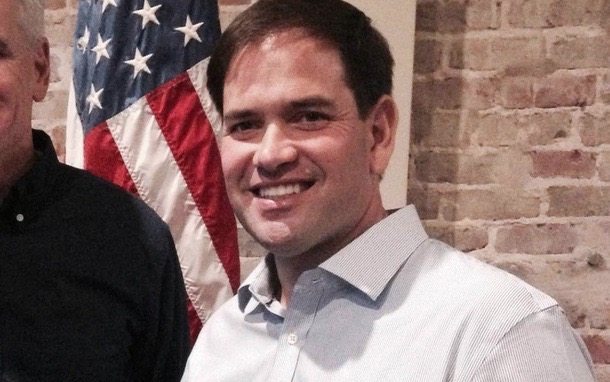 … BUT HE’S NO FRIEND OF FREEDOM OR FREE MARKETS

|| By FITSNEWS ||  Three years ago, this website would have viewed a presidential announcement from U.S. Senator Marco Rubio as a good thing.  Along with fellow Senators Ted Cruz and Rand Paul – who have already announced their 2016 candidacies (here and here) – Rubio entered the U.S. Senate in 2010 with a head of steam.

And to his credit, he’s been far more consistent on fiscal issues than the vast majority of “Republicans” when it comes to fiscal policy.

But the more we learn about this “conservative,” the less we like.

First, we discovered Rubio’s support for market-distorting government sugar subsidies – which is ostensibly explained away by the fact Rubio represents Florida, which is home to a powerful sugar lobby.

Both of these politicians like to talk a big game about being “conservative” and “pro-free market,” but when it came time to actually stand on those principles – they whored themselves out to the crony capitalists.

That’s not leadership … it’s cowardice.  And betrayal.  And one of the main reasons nothing ever changes in Washington, D.C.

Last year, for example, he attacked whistleblower Edward Snowden for having the audacity to let Americans know that their government was spying on them.

Then there’s Rubio’s anti-freedom, anti-free market position in support of America’s failed war on drugs … and his anti-taxpayer foreign policy (like U.S. Senator Lindsey Graham, Rubio is a rabid “neoconservative”).

“I disagree with voices in my own party who argue we should not engage at all, who warn we should heed the words of John Quincy Adams not to go ‘abroad, in search of monsters to destroy,'” he said.

Again … no one is saying America should “not engage at all,” we’re simply saying the current “invade everybody” doctrine espoused by Graham, Rubio and others is something American simply cannot afford.  Something that hasn’t – and will not – make us safer.

But Rubio doesn’t see it that way …

Despite a struggling economy and skyrocketing debt, he still sees visions of empire.

“In every region of the world, we should always search for ways to use U.S. aid and humanitarian assistance to strengthen our influence, the effectiveness of our leadership, and the service of our interests and ideals,” he said.

Add it all up and Rubio – who was swept into office on a Tea Party wave – has become a part of the establishment.  Which is probably why he’s hired the preeminent establishment “Republican” to run his South Carolina campaign.

The only good thing we can say about the guy?  He’s been an effective critic of Hillary Clinton – the presumed Democratic nominee.

“Just yesterday, a leader from yesterday began a campaign for President by promising to take us back to yesterday,” Rubio said of Clinton – whose presidential announcement was made the day before his. “But yesterday is over, and we are never going back.”

And a big reason for the backwardness is because “conservatives” like Marco Rubio simply aren’t that much different than the “liberal” Democrats they’re attacking.

What about the GIANT, lily-White, privileged, pedigreed, and testy, elephant in the room…

Why you hating on Carly Fiorina?

Yep.Fits is a Democrat.Why would you expect him to attack socialist Clinton?

That SNL skit on Hillary cost her 2%. Just saw Bloomberg Poll in which 40% of Americans will NOT vote for her under ANY circumstances…27% will…the numbers will never add up for her…it will be close because of the Democrats cheating but they have no chance…a third party is only way DEms could scratch a win…why they are working on that now…

I’ve said A LONG time ago that Liberal-Tarians EXIST to put Democrats in office, after the people have deemed them unfit. (See Va. Gov)…

Just like Bill…Hil will need a Ross Perot…and I I don’t think we’re that stupid at this point. With ALL the damage Obama – and the Democrats have- done…we cannot afford another disaster in the White House…

preach on bro…you get it!

damage? have you checked your stocks lately? wayyyyy up since 2009. That is a disaster???!!!

How long do you have to suck off Warren Buffet before he pays you for the “job.”….IDIOT!!!

You Ignorant F*#k…when people have to pay quadruple now to go to the doctor, and they cannot afford shoes for their kids…they D*#n sure don’t have money to invest…Dumb@$$…The rich are getting richer, but the working people are starving…

Middle-class has been on the decline since Reagan.

Say yourself some money and hit up that free clinic.

What you Dolts get fed by Salon, The Nation and Huff-Po is hilarious…

You’re are the Dumbest and Dullest FOR SURE…LMAO…

So, in the 80s there wasn’t a period of anti-regulation presided over by President Reagan? Please, I’m all ears, bucko.

You’re a F*#King idiot…During G. W. Bush, and Reagan…the US had the two most robust economies in the last 50 years.

Obama’s is the WORST since Carter….and it’s times 2 because we dumped Carter after one term.

Again with the gay sex stuff. Why do you run from who you are? Why do you hide? We always have to remind you of who and waht your are, and you hide like a liberal. But then liberals like you always do.

It’s just LOVE man…why do you have to Label Love as if it’s dirty…You Dumb@$$ homophobe, redneck Bigot….LMAO….

One more in the clown car. I will get crowed before this is over.

Clown car or Scooby van…not much difference is there.

One has better food for when you get the munchies.

just sayin. Thank you for your incisive comments. Or should I say your ignorant and racist comments. You are just another outstanding product of South Carolina’s failed educational system.

Oh me, another looser joining the list of lightweights. When will it ever stop????????

Good, looking forward to his candidacy.

re-arrange the letters of his name and you have : Birac Uboma.

Rubio is a typical Republican hypocrite. He panders to the TP-types until he’s elected then falls back into being a stooge of moneyed interests. Per his website, he hates “out-of-control spending in Washington that is piling up debt,” but he ranks #8 on the list of senators taking sugar money. He voted against the amendment killing sugar subsidies, which keep U.S. sugar prices at 70% – 90% above world market price. A little payback, maybe? — since he received the maximum dollar amounts in contributions from all the Fanjul family of Florida sugar magnates. Also, the Fanjuls have hosted a series of “fat cat” fundraisers for him over the past years. Rubio also voted against the amendment to repeal direct payments to farmers and update crop insurance programs. I am sure it’s just a coincidence, but the Fanjul’s own 187,000 acres of sugar cane fields in Florida.

He’ll have a bunch of baggage to work through. He’s buddy David Rivera is about to be indicted on campaign violations and other nefarious stuff. They own a house together that was in foreclosure. Marco had another scandal on using the a GOP credit card for personal use. Then there’s his Florida PAC where he used that to live off of. Marco has plenty of skeletons in the closet. And then there’s the famous Rubio Immigration Reform bill that he backed, then ran away from.

I recall the story of him having his back waxed (Yes, his back!) and charging it on a Florida Republican Party credit card. That makes him presidential material!

Marco will make a good show, maybe Jeb will pick him for the VP slot. But he’s not going to outraise Jeb, just not. Of course, Jeb could decide not to run and let Marco go for it. Marco has a shot against Hillary, he’s as tall as she is. If it’s the Latino against the woman, I’d go with the woman. If it’s the legacy race, and it will be, it’s Clinton’s against Bushes. It won’t matter about Hillary’s record, or Jeb’s record. It will be about the legacy of the families. And in that race, Hillary has the edge.And if Hillary has the edge, you can kiss Marco’s Senate seat goodbye. Jeb and Marco might flip Florida in the general, but they have an uphill climb to flip FL, OH, VA, CO, NM and NV. They fail to flip just one, and they don’t make it. And VA and OH probably the hardest for them to flip.