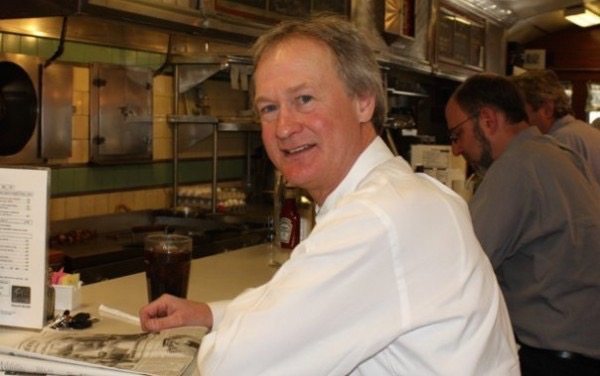 || By FITSNEWS || A liberal Democrat who used to be a liberal “Republican” is coming to South Carolina this week.  And yes … he should feel right at home in the Palmetto State, shouldn’t he?

Lincoln Chafee – a two-term U.S. Senator from (and one-term governor of) Rhode Island – will be attending this weekend’s S.C. Democratic Party convention.  It’s all part of his recently announced decision to “explore” a possible presidential bid.

Chafee was a “Republican” from 1999-2007, an independent from 2007-13 and has been a Democrat for the last two years.  But he’s always been a big government liberal.  In other words, he’s proof positive that political labels don’t mean a damn thing.

“A two-time supporter of U.S. President Barack Obama, Chafee consistently voted against tax cuts at the federal level (including income tax relief and the elimination of the death tax),” we wrote of this chameleon back in 2013.  “He also consistently voted in favor of new government spending – and is an adamant opponent of parental choice at all levels of government.”

Chafee did vote against the “Republican” expansion of Medicaid in 2003, but just prior to that he cast a pair of key procedural votes to help move the legislation forward.  So he gets no points from us.

To his credit?  He did vote against the Iraq War … a position he is currently holding over the head of presumptive Democratic nominee Hillary Clinton.

“That was a moment where the premise for going to Iraq was so false that there were weapons of mass destruction; she didn’t do her homework. We live with the ramifications,” Chafee told CNN’s ‘State of the Union’ this weekend. “You may say that’s 12 years ago — that’s a big motivator for me running. If you show a lack of judgment, lack of doing homework then, what can we expect in the future?”

Chafee has also criticized Clinton as being “cold” and wanting to be “the center of attention.”

Representing Clinton at the S.C. Democratic convention will be Terry McAuliffe – the liberal, crony capitalist governor of Virginia.  We look forward to seeing how he responds to these jabs.

Saunders has been in South Carolina previously touting Clinton’s vulnerabilities …

Hillary Clinton Versus … You