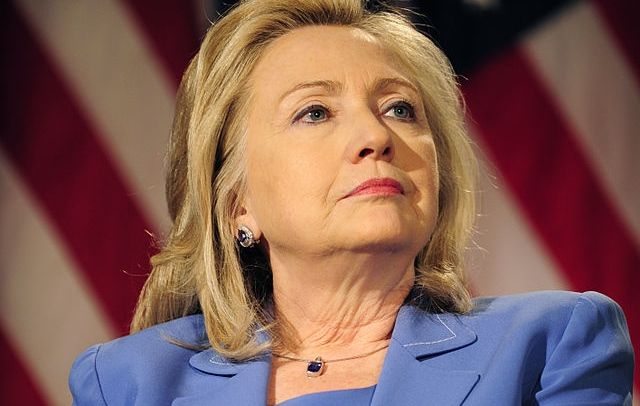 With U.S. president Barack Obama‘s approval rating at record lows, presumed 2016 Democratic presidential nominee Hillary Clinton is doing her best to put some distance between herself and an increasingly unpopular administration.

The only problem? She’s running from the arms of Obama – whose foreign policy she (mis)managed from 2009-2013 – and into the arms of the warmongering neoconservatives like U.S. Senators John McCain and Lindsey Graham.

In an interview with Jeffrey Goldberg of The Atlantic , Clinton lays out her argument for a more aggressive U.S. presence overseas.

Specifically, she highlighted her role within the Obama administration as an advocate greater American involvement in the Syrian civil war.

“The failure to help build up a credible fighting force of the people who were the originators of the protests against Assad—there were Islamists, there were secularists, there was everything in the middle—the failure to do that left a big vacuum, which the jihadists have now filled,” Clinton told Goldberg.

Really?  Last time we checked America was heavily engaged in the effort to defeat Assad – supporting the very Islamists she now seeks to cast in the role of bogeyman (see HERE and HERE).

Clinton said there was a “happy medium” between Obama’s foreign policy and the ultra-interventionist approach adopted by former president George W. Bush.

“You know, when you’re down on yourself, and when you are hunkering down and pulling back, you’re not going to make any better decisions than when you were aggressively, belligerently putting yourself forward,” she said.

Clinton also inched ever closer toward the “if we don’t go there, they’ll come here” logic employed by McCain and Graham.

“One of the reasons why I worry about what’s happening in the Middle East right now is because of the breakout capacity of jihadist groups that can affect Europe, can affect the United States,” she said. “Jihadist groups are governing territory.  They will never stay there, though.  They are driven to expand.  Their raison d’etre  is to be against the West, against the Crusaders, against the fill-in-the-blank—and we all fit into one of these categories.  How do we try to contain that?  I’m thinking a lot about containment, deterrence, and defeat.”

Look, if there is indisputable evidence of a credible threat to the American homeland we absolutely support the use of overwhelming force to eliminate that threat.  We also support armed neutrality to protect our vital national interests – which consists of a well-trained, well-equipped military force (one in which projects are driven by need and effectiveness, not pork barrel politics and special interest pay-offs).

But that’s not what McCain, Graham and now Clinton are proposing.  They want to go into these countries and “nation build,” using any and every new toy their military-industrial complex masters want to build.  Oh, and if you oppose them – they accuse you of being anti-American.

We get that Clinton wants to distance herself from Obama … but running into the arms of the “neocons” is not the way to do it.