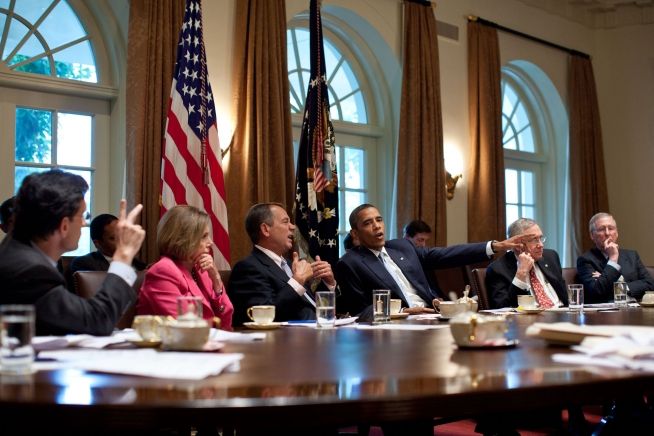 AND SO DOES BARACK OBAMA …

|| By FITSNEWS || Sporting a deep tan (two weeks into winter), status quo “Republican” John Boehner won reelection to a third term as Speaker of the U.S. House of Representatives this week.

Of course the real winner is U.S. president Barack Obama – who has benefited over the last four years from Boehner’s chronic appeasement.  Oh, and Washington, D.C. liquor store owners … and tanning salon operators.

Despite his win, 25 GOP lawmakers (including South Carolina’s own Jeff Duncan) voted for someone other than Boehner.  That’s the largest defection an incumbent Speaker has faced in the last century … and the worst could be yet to come for the fiscally liberal Ohio lawmaker.

Polls show the rank-and-file GOP is done with Boehner – and with good reason.  He’s a “squish” – a guy whose first impulse is always to sell out, not stand and fight.

“We’ve never had much use for Boehner, who has been utterly worthless except for two areas: Capitulating … and getting drunk,” we wrote earlier this week. “Boehner defines accommodation … an ongoing ideological betrayal that always seems to come at the expense of your wallet.  And your liberty.  And it’s not just when the going gets tough … this guy caves before the fights even begin.”

In fact Boehner’s acquiescence was on full display last month when he supported yet another fiscally liberal spending plan – as opposed to passing a short-term resolution and letting the new “Republican-controlled” Congress work out a better budget deal.

Such accommodation is par for the course for Boehner, who has consistently backed Washington’s culture of excessive taxation, spending and borrowing.

Sadly, it’s not surprising Boehner won … but it is surprising some of the lawmakers who supported him.

Related Topics:John Boehner
Up Next