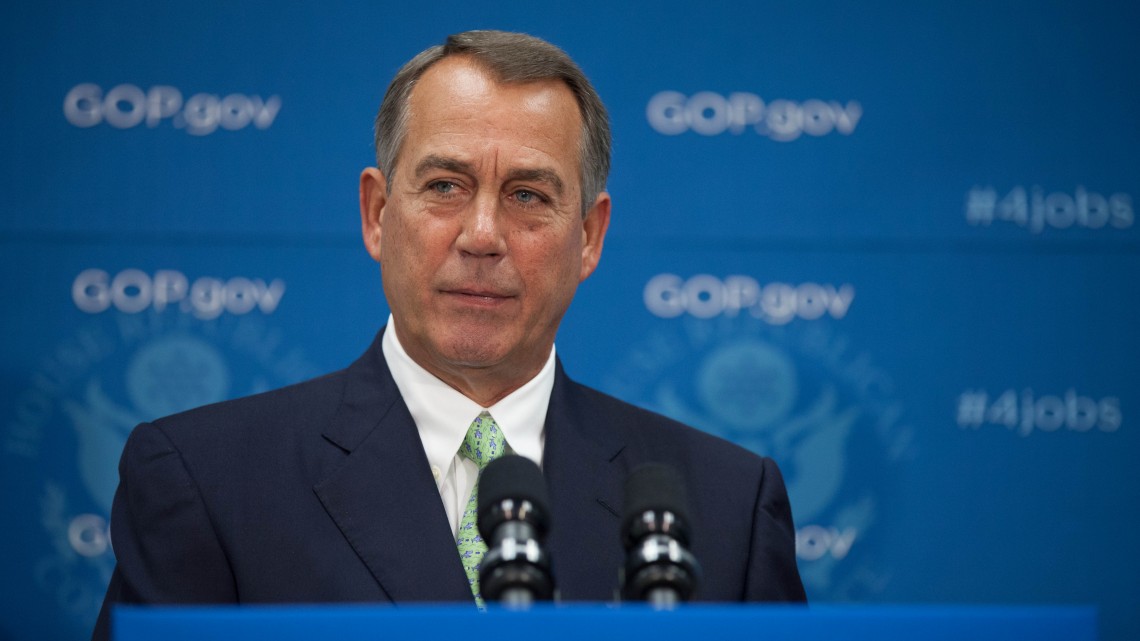 HOUSE MEMBERS SHOULD RECONSIDER THEIR SUPPORT FOR EMBATTLED SPEAKER

After four years of watching and rooting for Boehner to succeed in fighting to limit the size and scope of government, fully 60 percent of Republicans surveyed want someone new to be Speaker.

To make matters worse for Boehner, 64 percent viewed him as being “ineffective in opposing Obama’s agenda” – a resounding repudiation to the person most associated nationally with leading Republicans during the Obama presidency.

What is almost as amazing is that the Speaker is barely right-side up on the favorable/unfavorable test among Republican voters, scoring a meager 43 percent to 34 percent edge among those who should be his staunchest supporters.

The poll has been released in advance of the upcoming House session, with increased movement amongst members to reconsider their decision to support Boehner on the floor of the House.

Discontent among Republican House members over the handling of a variety of issues during the lame-duck session, most notably the decision to fully fund President Obama’s top three priorities — ObamaCare, the Environmental Protection Agency and his executive amnesty — have created a rebellion within his own conference.

Rep. Jim Bridenstine (R-Okla.), who previously pledged to vote for Boehner, changed course in a press announcement, writing that “The CR/omnibus legislation sufficiently undermines the checks and balances enshrined in the Constitution that it warrants my pending vote against the [S]peaker. John Boehner went too far when he teamed with Obama to advance this legislation. He relinquished the power of the purse, and with it he lost my vote.”

It’s time for Boehner to go.

I hope he doesn’t cry again.

You are a Democrat.

If thinking that Boehner has been a disaster makes me a Democrat, then I guess I’m a Democrat. Please don’t tell anyone though.

Disaster? Boehner has Obama righr where he wants him:
NO IMMIGRATION REFORM
NO OBAMACARE
NO JUDICIAL APPOINTMENTS

Colonel I am worried about you. Do you need a sub? :-)

You’re a fool. Boehner is getting ready to give Obama:
1. Immigration Reform (as ordered by Bush family)
2. Already funded Obamacare for FY2015
3. Senate does Judicial Appointments idiot – Boehnor is in the House.

Boner looks just like ,Huckleberry Hound dog.He looks like LBJ in his clinical depression,when he refused to run for office,again…

If he was cock suckin queer,you would love him.

Boehner needs to go. He had his shot. Time to let some other blood take the wheel.

Boehner and Kasich just fucked you Dems in Ohio.

just like Brownback fucked you in Kansas, and well everyone got fucked who lives in Kansas as well. He will be a huge issue for you in 2016 ..but hey maybe you can ask Sarah Palin to bail you out…LOLOLOLOL.

I loved the Wizard Of Oz and Dorthy and why I am so upset about that homo liberatarian that tryed to steal the election from that senator.

So? Better than having a muslim pResident that hits the golf course 7 minutes after an American is beheaded and laughs it up with his racist buddies.

ahh the muslim story..once a person is proven as a liar, they are always viewed as a liar, hence why you get no respect and are a laughing stock on this site as in life I imagine..lets take a look at when you nutjobs do actually take over a state like Kansas and what happens: (and these are from the far right KC paper..) http://www.kansascity.com/opinion/opn-columns-blogs/yael-t-abouhalkah/article5332056.html

You really are a disgusting lunatic. I have never seen a blogger use another persons s/n as a way to perpetuate some kind of self- worth. Pitaful. GT owns you.

You contribute NOTHING with your worthless diatribes except showing all you are insane and a piece of shit in the chain of life.

Funny i point out youre a liar and look at the rage..lololol. You dont comment on that but go one a tangent..lolol…owned!!!! what cant admit you’re a liar? look at your rage..you are my bitch..get used to it. admit you’re a liar..come on we all know it troll. Oh and your outrage for me using my name is funny compared to the guy who has to sign in under multiple names and up votes his own comments..you are such a sad loser of a troll..time for “guest” to upvote you huh insecure one..troll.

I aploogize.I am a psychotic nut.

It’s a shame when a known Guest – who is Muslim – attacks a Christian like Obama for being a Muslim. How sad.

Can we PLEASE start the New Year without talking about GrandTango’s genitalia?!!

Beat you to it?

You dream about it.

I agree. Republicans have a ‘big tent’ on ideas and policy.
You ain’t a Democrat representative unless you hate America and God, love ISIS and abortion while supporting policies to steal wealth, burn our neighborhoods down, kill cops, drugs and perverted marriage.

Hey, the idiot dropped in. Oh, what a blessed day….

[fast talking voice at the end of commercial]

Least productive House in US history and they “wonder” if he is ineffective?

Boehner fucked you all. Obama’s E/0 on immigration eliminated any chance of reform.
Obama fucked the illegals. What do they have on January 4th, 2015? NO path to citizenship and NO vote. They can work and pay taxes-love it since they are bankrupting Medicaid in states.

i am sorry…i am drunk already and can somebody pick me up for church? i put tape on my fingers and take money from the offering so i can drink in the afternoon. thanks.

look flip has to post as me…lol…so owned hes got my name on his forehead..trolls are trolls i guess.

You can’t even post the truth when you are in a drunken stupor! Idiot.

ahh the fucking little troll is posting as flip today instead of “guest” tiny balls cant decide which name to use..anyways..and if assholes like you didnt try and repeal the ADA on every dam bill or give banks and oil and gas immunity to any crimes and thought of the people a bit more maybe some value would come unit then assholes like you ruin it for all.

instead of reading from the heritage foundation times try an independent..:

‘scum’ is that hateful bitch Wendy Davis in Texas.

worse than hypocrites in your own bed?

Wendy Davis should be the poster child for the Democrat Party. My guess is she eats a dead fetus for breakfast? An evil bitch. Worse than no ‘Clit’on and Pukelosi.

My guess is she eats a dead fetus for breakfast?

——–
I’d talk to a professional about that.

Her problem, not mine.

Your guess that she eats a dead fetus for breakfast is so macabre, that for you not to recognize it as mental illness means you’re sicker than I thought.

LMAO you fucking, American hating weirdo. I sure hope they dig your basement up someday in Tucumcari. Fool.

Your problem isn’t in your basement – it’s in your mind.

Oh. Charles Manson once said ‘Don’t blame me. I didn’t write the music’.
Use that as your defense and hire Judge Judy.

Have you already forgotten that you were dreaming of a politician eating dead fetus?

youa re such an angry little troll..soon it will back to the muslim president lie etc..because we all know if you have to lie to make a point, you have no point huh little troll?

I don’t view “Boner” as ineffective. He is a sell out to Obama pure and simple. By being his moderate self he lets the Dims run over him and the “majority” Republicans. He is a spineless wimp that needs a good replacing.

Hey Rogue. Did you see Mike H. cancelled his show?Appears he may run in 2016.

He is , IMO the best candidate to get the conservative vote as well as the religious right vote and at the same time be palatable to the mushy middle establishment types. We have to be on guard for the Fred Thompson spoiler candidates as well. It is a long way till Nov. 16.

If Boehner is ineffective it’s because he is trying to herd Tea Baggers (cats) who are defective. I am looking forward to when these Jokers have to Govern. Better build a bunker.