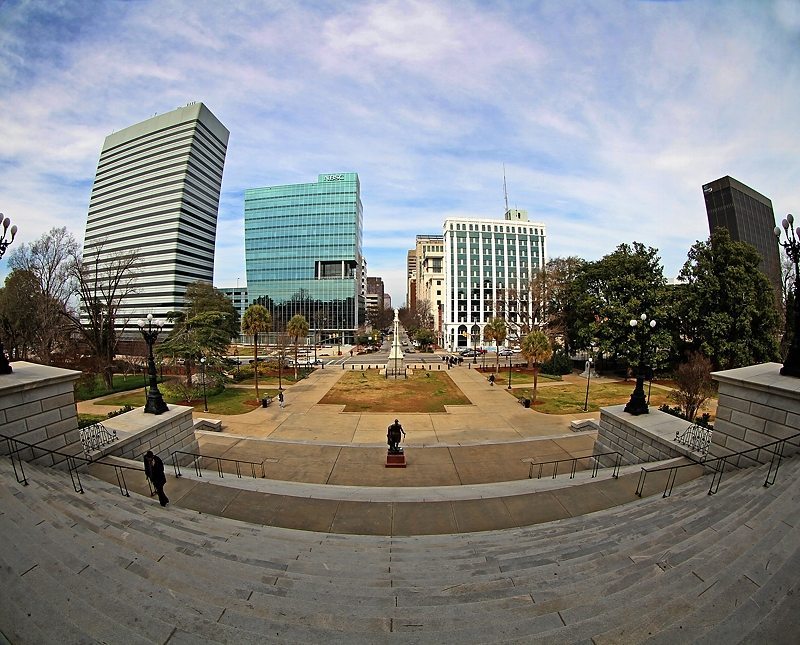 By FITSNEWS  ||  South Carolina has fared poorly on a new report which ranks states based on their willingness to embrace the free market – a report which also highlights a nationwide trend toward more government and less economic freedom.

Surprised?  Don’t be … look at our low income levels.  And low labor participation.  And then look at the failed government monopolies that are responsible for those dismal results.

Seriously … it’s been like this for years in the Palmetto State.  Yet rather that implement free market policies to help turn things around, “Republican” S.C. Gov. Nikki Haley has chosen to advance a fiscally liberal agenda on taxes, spending, education and (most notably) government-subsidized health care.

While our neighboring states blow past us …

Anyway, according to the Fraser Institute’s “Index of Economic Freedom in North America,” South Carolina was one of eleven states classified as the “least free” economically in America.  Meanwhile the United States itself continues to see its economic freedom decline.

In fact, “on average, Canadian provinces now have a higher level of economic freedom on the world-adjusted index than US states,” the report noted.

“High levels of economic freedom help create prosperity and economic growth for working families,” the report’s authors stated.  “The freest economies operate with minimal government interference, relying on personal choice and markets to decide what’s produced, how it’s produced and how much is produced. As government imposes restrictions on these choices, there’s less economic freedom.”

Well, unless of course you are an elected official in South Carolina.

Of course FITS likes this retarded, ass-backward viewpoint. Only it isn’t insane enough, is it, fuckwads.

The Tea Party revolution is in full swing. I’m sure their newly elected buddies in Washington will bring more of the same on the federal level.

South Carolina should immediately renounce and refuse anymore funds from the federal gov’t. Of course 45% of our state budget will disappear but we can’t very well call the poor takers and freeloaders when we take so much money from the hated federal gov’t. now can we?

Until then it is all just hypocrisy from Republican corporate loving stooges.

SC is the poor taker and freeloader of the states. Get it together, white thrash.

In recent months, South Carolina has begun booming its way out from the shadow of the Great Recession. Here’s how the Palmetto State is doing based on our metrics:

South Carolina had the largest drop in its unemployment rate among the states, going from 7.8% in June 2013 to only 5.3% in June 2014 — a drop that puts South Carolina’s rate under the national average.

The rest of the USA should refuse to continue to make up the economic difference for your slack asses. Time and time again SC has to be dragged into the present by the rest of us. You’re like the “slow” awkward cousin Mom makes us play with just to be nice.

You sure blew past me last night!!!

Haley has brought us unbridled prosperity and economic opportunity. She is hailed nationwide as a job creator, and a friend to business. We are lucky, nah I should say, honored, to have her as our governor. You go girl!!!!
Yes – I’m baaaaacccccckkkkkk. Spent the last three weeks in bed with Rocky – he’s awesome.

She is hailed nationwide

I came once in your mouth, boyfriend! No more today.

Stop it Sandi. We all know it’s you.

LMAO you finally caught me. I bow to your superior intellect Smirks.
And just as a treat I also admit to making fake posts as Rocky and
upvoting my own posts to looking important. :-)

This is a lie. I’ve never touched Sandi.
Smirks?

She isn’t hailed as shit nationwide. Nearly all of the nation has no idea who she is, much less what’s happening in that backwards welfare state.

In recent months, South Carolina has begun booming its way out from the shadow of the Great Recession. Here’s how the Palmetto State is doing based on our metrics:

South Carolina had the largest drop in its unemployment rate among the states, going from 7.8% in June 2013 to only 5.3% in June 2014 — a drop that puts South Carolina’s rate under the national average.

South Carolina’s largest private-sector industries are professional and business services, retail trade, and manufacturing. Here’s how South Carolina did on our variables:

Gross Domestic Product per capita was just $30,728, also the third-lowest.

Nikki Haley is the savior of this state. A job creating machine that fights for truth and decency.

I thought Jesus was the savior of state?

Haley walks on water.She saved our economy and the children from the Democrats running DSS.

And Canada has socialized medicine!

There’s the “free market” then there’s the FREE market!

It is telling that this was co-published by the Cato Institute in the US.

The report hates the minimum wage, “Takings and Discriminatory Taxation”, Social Security, any sort of government aid to the poor, etc. and so forth.

Both are funded by the Koch Brothers. (Surprise!)

Economic freedom in SC is as strong as ever. Each and every South Carolinian is free to be poor, unemployed, uninsured, ignorant, backward and indebted. Any other situation is just socialism.