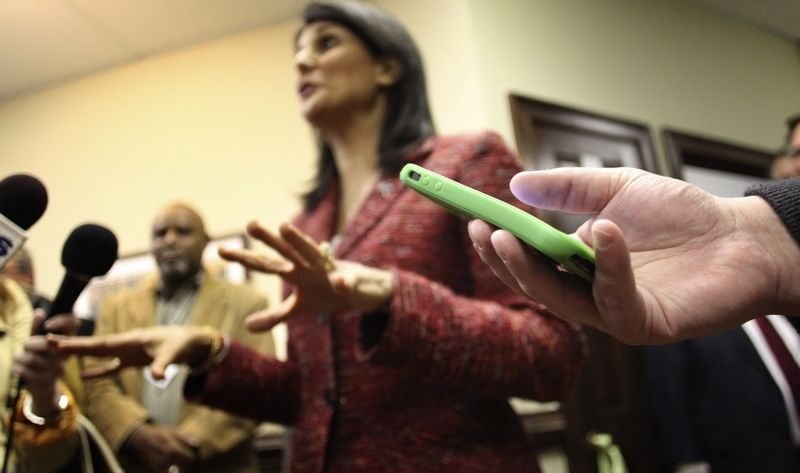 S.C. Gov. Nikki Haley is praised by the national GOP establishment as a “strong conservative.” Meanwhile national Democrats derisively refer to her as a “Tea Party Governor,” a nod to the wave election that (narrowly) ushered her into office in 2010.

But is Haley either of those things? Not according to the dollars and cents …

Embarrassing … especially in a state as bloated and inefficient as South Carolina.

This year Haley has rolled out a $23.4 billion executive budget – the largest spending plan in state history. Included in its pages? A whopping $467.1 million increase in Medicaid funding (which will go to fund the Palmetto State’s 16 percent Medicaid growth rate).

For those of you keeping score at home, that growth rate is three times last year’s increase … and more than three times the national average for states not accepting the Medicaid expansion associated with Obamacare.  Astoundingly, though, Haley has managed to swell South Carolina’s socialized medicine rolls above and beyond the average Obamacare state – which is expanding Medicaid at an 11 percent clip.

Are these the policies of a Tea Partier? No.

Are they the policies of a “conservative?” No.

Are they the policies of “Republicans?”

Sadly, it would appear so …

During her six years as a member of the S.C. House of Representatives from 2005-11, Haley was a tireless advocate for less government.

Today? She’s your typical big government “Republican,” pursuing the same policies that have held this state back for years.

Could she at least come up with some innovative liberal ideas? Expanded, unreformed health entitlements? Expanded pre-k programs? Expanded and unlimited centralized education? She might as well be a reanimated Gene McCarthy. Seriously, take a look at this material from his ’68 campaign and you see the same mindset. Head Start, education spending in whatever amount “necessary to develop [a student’s] full potential,” etc.

Well she probably lacks the intelligence to do so, but its an improvement that she is not sticking with the same old tired GOP ideas that have brought the middle class to its knees over the past 30 years and then almost destroyed the country under Bush.

Which ideas are those? Reaganomics reversed Carter’s malaise and unleashed decades of prosperity. If only we would go back to conservative ideas. Big government liberalism is bankrupting are country.

If Sheheen is smart, he’ll start campaigning on raises for state employees. I’m betting with a 1% raise since 2007, they’d chomp at the bit to vote for him.

If Sheheen was smart, he would not be a democrat. Have you looked at the COLOSSAL F*#king mess Obama, and the democrats, have made of this nation???

Haley is beatable by a Conservative, but this is the ABSOLUTE worst time to be a democrat…especially in a right-minded state like SC.

She’ll need to do very little, other that slap the P!$$ out of the federal gov’t, as she has, to get re-elected.

Liberal-Tarians may not like to hear that..and liberals are too stupid to figure it out…but that’s the reality of it…

Is there something wrong with your keyboard? It looks like some letters and symbols have gotten switched.

I know it P!$$#$ you off..and looky, looky..your small mind just can’t seem to think of anything to come back with…LMAO…A typical brain-dead liberal…

GT’s way of being right is to be wrong at the top of his voice, but when his mind goes blank he forgets to turn off the sound…..

When he was just LittleTangerine and about to enter the first grade, an older kid gave him some advice to help him out. “Don’t learn how to spell CAT, because if you do, after that the words just get harder and harder!”

FWIW, I don’t care for either one of them, and hope both of them face (and lose to) challengers in the primaries.

I was just making a statement that there is a huge disgruntled group just WAITING for some politico to pander to it.

You know, FITS, if you want to include the monies the state brings in from the Feds as part of the “budget”, that’s fine. It’s deceptive, but you were raised on Mark Sanford and his playing around with numbers to come up with what he wanted, so that’s understandable.
But, to come up with a percentage based on a figure that includes that which the legislature does not appropriate and the governor cannot veto, is a flat out lie. That is what you did here, right?

How is it deceptive? It is the only honest way to look at it. in fact, the federal dollars should be discounted for the lack of permanence! Taking these dollars, depending on the program, is actually an encumbrance on future state tax dollars.
Only a good old boy insider would claim counting ALL money is deceptive.

“The numbers don’t lie”. Wish we could say the same about her hiney-ness.

Let’s send Haley packing home in the next election.
‘It will be a GREAT day in SC!”
“Join the movement!”
Hope all of my Republican friends will vote with their brains, rather than blind Party lemming following.
She has been a disaster! Lying, cheating, self serving disaster.
I voted for her once….once too many, not again.

Here is the deal. If Democrats do not come out in the June Primaries and subsequent run-off to defeat Sen Graham, Republicans will come out in November and defeat anything with a “D” attached to their names.

So what you are saying is that if Democrats do not help defeat Graham in June you will vote for him in November. Typical NINO.Teanut logic. Don’t Republicans typically vote against Democrats? So what is the threat here.

No doubt Gov Haley has a Same Party Identity Disorder. Unfortunately, voters do not want elected officials to vacillate on policy issues. Four years ago, the Voter Class protested against Big Government Spending and Big Government Taxation. Seems Gov Haley is all about preserving her Big Paycheck and Big Benefits while looking hard at jumping ship to get a Big Paycheck and Big Benefits in a Big DC Job. It is a real turn off and shows us in the Voter Class where her loyalties matter most…her personal advancement.

Ha! Numbers are the most prolific little perjurers ever conceived. They can be romanced, seduced, massaged, shoehorned, forced, or jackhammered into proving anything one wishes. Truth with numbers is like honor, often spoken of but rarely truly found among thieves.