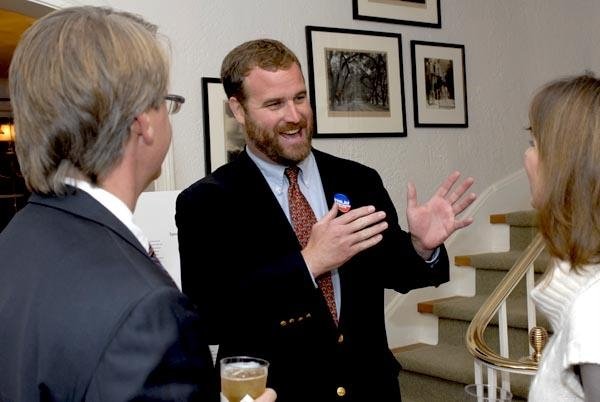 By FITSNEWS || Tired of seeing his record misrepresented, GOP S.C. House candidate Kirkman Finlay is firing back at his liberal trial lawyer opponent Joe McCulloch in their race for S.C. House District 75.

Finlay’s campaign has launched a new television advertisement not only responding to McCulloch’s demonstrably false claims … but also recalling the liberal challenger’s own ethical problems.

“Some people will do anything to get elected,” the ad’s narrator says in the spot.  “Trial lawyer and former lobbyist Joe McCulloch is used to distorting the facts to get what he and his clients want.  Now he is using false attacks to deceive the voters of House District 75 and distort the record of Representative Kirkman Finlay.”

That’s true … in fact we’ve documented McCulloch’s false claims (and those helping him make them) repeatedly.  Yet for reasons surpassing understand, McCulloch keeps making them – apparently hoping that sufficient quantities of mud will depress Finlay’s turnout.

Really?  This guy couldn’t even win two years ago when Democratic candidates benefited from perhaps the most egregious example of election fraud we’ve ever seen.

First of all, nice voice …

We need to hire that woman to read our copy!

As we’ve stated from the beginning of this race McCulloch has been running the typical “Finlay is a Republican, therefore Finlay is unethical” playbook – which Palmetto State Democrats have pegged as their best chance to pick up some seats this election cycle.

And usually they’re right … “Republicans” in South Carolina are typically corrupt as hell (just look at the current governor and now-former Speaker of the House).

The only problem?  Since his election two years ago Finlay has done more to advance big ticket ethics reform in the Palmetto State than any other lawmaker.  He’s been a longtime supporter of expanded income disclosure – as well as a leader in the push to end the General Assembly’s corrupt self-policing policy.  In fact we wrote a column two months ago discussing how ridiculous McCulloch’s line of attack was given Finlay’s advocacy on behalf of these two critical reforms – neither of which was embraced by Gov. Nikki Haley and her allies.